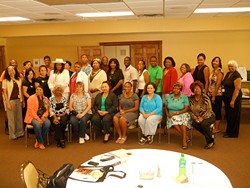 Every person has a story to tell, but sometimes he or she might need help telling it. That is the driving philosophy behind the National Multicultural Writer’s Association (NMWA), a nonprofit that provides a community for writers in Oklahoma and beyond.

“NMWA’s purpose is to provide a venue to help aspiring writers reach their goals, become published writers, and for members of the organization to reach their personal goals,” Thomasena Martin-Johnson, a published author and former professor of writing and English at Langston University, told Oklahoma Gazette.

NMWA has not always hosted the symposium. Martin-Johnson said that eventually, membership between the two groups overlapped and a merger occurred three years ago.

“It finally got to the place where everybody who was in NMWA was a part of [the symposium],” she said.

While the event initially focused on biographical storytelling, Martin-Johnson said NMWA has since expanded the subject matter to include poetry, nonfiction and youth-oriented writing.

NMWA also hosts other projects, such as book fairs, to benefit local readers and writers. Martin-Johnson said A Writer’s Vision has become a major project for the organization.

“We welcome anyone who’s interested,” she said. “We want to become an integral part in Oklahoma, whereby writing and reading become important.”

Martin-Johnson and other NMWA leaders often teach symposium classes, but they decided on a change for the 2016 program. For the first time, the event takes place over two days and at two venues.

Guests this year will hear from writer Valerie J. Lewis Coleman, bringing A Writer’s Vision Literary Symposium 2016 full circle. Martin-Johnson said one of the initial inspirations for the event came after a similar seminar Coleman led in Ohio.

In addition to education and encouragement, another vital element of the symposium is the ability to network and develop and maintain connections with editors, publishers and other industry affiliates.

“It’s going to be a networking organization,” Martin-Johnson said. “Many people come and they’ve always had it in the back of their mind that they want to write something. This kind of jumpstarts them, gives them a nudge.”

The community A Writer’s Vision promotes has led to results for writers.

“We’ve had several people who have been published as a result of attending,” Martin-Johnson said.

She also noted how the possibility of publication for multicultural writers living in the central United States is not readily apparent or visible. Martin-Johnson said that modern writers and writers from the central U.S. are not always talked about.

“If you go to school in the United States, many of the writers that you know anything about are from the East Coast,” she said.

She also destigmatized rejection and urges writers to not take it as the final say of their own work. She added that self-publishing is another valid avenue for expression, citing past self-published authors such as Walt Whitman and W.E.B. DuBois.

“Write. Write every day. Write,” Martin-Johnson said of her advice to aspiring writers.

Print headline: Write on, Writers collaborate to offer encouragement, advice and opportunities at this year’s A Writer’s Vision literary symposium.