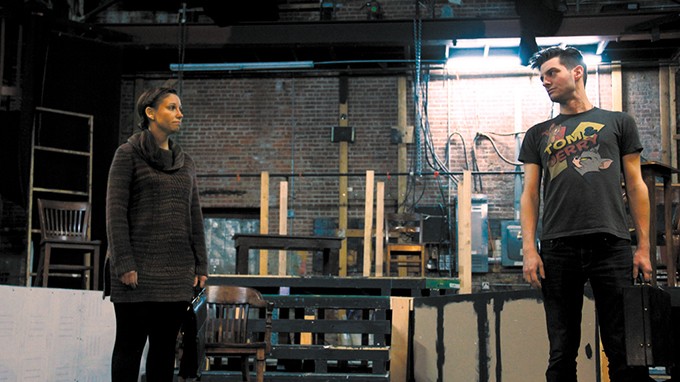 During the past four decades, Linda Lee McDonald has developed a well-rounded portfolio as a director, actress, author and playwright in Oklahoma City.

One area she hasn’t dabbled much in is military and courtroom drama, which is what made the upcoming performance of A Few Good Men at The Pollard Theatre in Guthrie so attractive.

That, along with the purpose behind it.

The play, which runs Feb. 16-March 3, debuted in 1989 on Broadway and deals with a high-level conspiracy uncovered at a court-martial hearing.

“I think [the themes] are still very pertinent,” said McDonald, who is directing A Few Good Men for Pollard Theatre Company. “It’s a question of morality and a feeling of going a step too far or obey the command and get blamed for it. I think that comes up in any war anytime you have a situation where orders are being relayed from higher command but the people on the ground see a different situation. So what is your moral responsibility then?”

Set in 1986, the play written by Aaron Sorkin, a popular screenwriter and playwright who is arguably best known for The West Wing, is loosely based on an incident at Guantanamo Bay Naval Base in Cuba, where several U.S. Marines nearly killed one of their own in a hazing incident — in the play, two Marines stand trial after being accused of murder.

The magnitude and relevance of the play challenged McDonald for the rendition in Guthrie.

The main character, a young and inexperienced U.S. Navy lawyer, puts together a plea bargain before realizing there is more to the case beyond the surface as themes of obedience and loyalty run rampant.

“It’s a well-known play, so we want to get it right with all of the feelings that go behind hit,” McDonald said. “For what is called a military play, there’s a lot of passion in it for doing the right thing and getting justice for the defendants or for getting them prosecuted. Everyone has a different side, so we need those sides to be played with a lot of feeling.”

In order to ensure the play came off as authentic, former Marines on Pollard Theatre Company’s board of directors created a miniature boot camp of sorts to educate the cast.

“They came one night and told us all about posture, the protocol of entering a room, when to salute, how to be dismissed,” McDonald said. “This may sound very basic, but we didn’t want to mess that up.”

Additional research helped, along with the background of a few cast members who have ROTC experience. McDonald even leaned on a former Marine friend who helped her better understand the military way of life.

They also learned about courtroom protocol, which is different in the military than a civilian court.

By the time Feb. 16 rolls around, the cast and crew of A Few Good Men will have gone through six weeks of rehearsal. McDonald said each week features five or six days of rehearsal.

“A lot of them are local and from Oklahoma City. There’s a lot of experience on the stage,” McDonald said.

McDonald noted how there’s even one cast member from Wichita, Kansas, who drives down for rehearsals.

Several Pollard employees are doubling as workers on the play, like Pollard artistic director W. Jerome Stevenson, who serves as the set and lighting director, production manager Timothy Stewart and costumer Michael James.

“They wear so many hats. They are amazing how they do that during the day and a lot of them are in the play,” McDonald said. “They are a really outstanding company.”

A Few Good Men features more than 40 difference costumes, the majority of which are military outfits.

“It’s sort of like a musical without the music in terms of size and the scope of the production,” McDonald said. “It’s pretty big.”

McDonald said there are 33 scenes in the play staged out on a series of three platforms and on the main floor. She said the second act mainly takes place in a courtroom setting.

The use of platforms helps with moving quickly and efficiently from scene to scene.

“One scene may be a commander’s office, the next may be in the brig where the two soldiers are being held and then to the floor where there’s another scene. We want a real flow to the scenes, rather than one scene and a blackout,” she said. “There will be a crossfade and a new scene will start immediately. We’re trying to keep it where it has a real organic flow.”