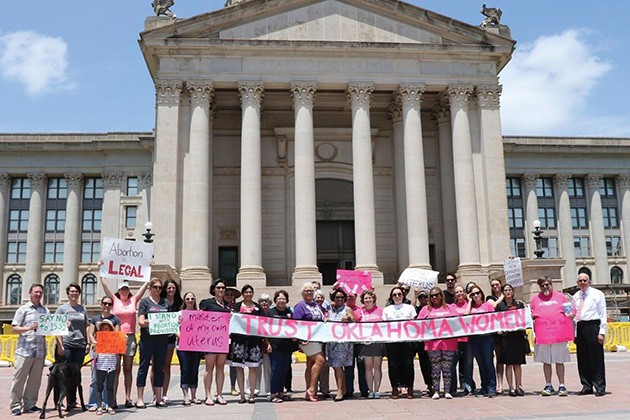 Proposed legislation in 2012 that would have granted a fertilized egg the same rights as a person mobilized Danielle Williams to join the fight for reproductive justice.

“It was kind of the first moment that I took the abortion debate personally. I luckily have never needed abortion care or anything like that, but it was just such an insult that my state would … devalue me so much,” she said. “I went up to the Capitol one day when I happened to hear that some members of [Oklahoma Call for Reproductive Justice] were meeting up to try to organize a rally. I didn’t know anyone, and I had never even been to the Capitol before.”

Today, Williams is co-president of Oklahoma Call for Reproductive Justice (OCRJ) board and is still deep in the fight — this time against an effort to ban a specific type of abortion.

District judge Cindy Truong ruled in July that a 2015 law banning dilation and evacuation (D&E) abortions was constitutional, making Oklahoma the first state ever to uphold a law of its kind. D&E is widely considered the safest and most common abortion procedure for women in the second trimester.

“D&E is a procedure that women use for second-trimester abortions. After a certain period of time, a medication abortion is not an option,” Williams said. “There are a lot of health issues that may not be apparent early in a pregnancy. So this policy, if it were to go into effect, wouldn’t just hurt women who want to prevent pregnancy; it would hurt women that want to have healthy babies and want healthy pregnancies. D&E is also used for miscarriage care. So again, that’s women who want families who are put at risk and having their health threatened.”

However, the Oklahoma Supreme Court ordered that the state can’t enforce the law while its constitutionality continues to be challenged in court. Attorneys for Center for Reproductive Rights, along with local attorney J. Blake Patton of Walding & Patton, represent Tulsa Women’s Clinic in the litigation and are preparing to appeal Truong’s ruling.

They initially asked Judge Truong to maintain the injunction preventing enforcement of the law until the case was appealed, but she denied it. They then filed an emergency motion for the injunction in the Supreme Court, where it was eventually granted Nov. 4 with only two dissenting votes.

Patton said the case could take a long time to be fully litigated, so keeping the injunction in place was crucial.

“We’re trying to turn the conversation toward just highlighting the compassion that’s inherent in making sure people can get the care that they need.”
—Danielle Williams tweet this

“Through that [injunction], women in Oklahoma and providers are safe from enforcement of this law. … It’s a massive deal. Enforcement could begin and this incredibly safe and extremely common method of health care could be taken off the table for Oklahoma women if that had not occurred, which would be devastating,” he said. “We will carry it through to the Supreme Court, and at the end of the day, that will be the ultimate court that renders the final opinion on the constitutionality of these laws.”

Tamya Cox-Touré, Planned Parenthood Great Plains Votes regional director of public policy and organizing, told Oklahoma Gazette via email that efforts to restrict abortion do nothing to protect the health of Oklahomans.

“This decision allows Oklahomans to continue accessing safe, legal abortion care and upholds our right to make decisions about our own bodies without government interference,” she wrote. “It’s important to remember that decisions about whether to end a pregnancy are deeply personal and should be left to the individual, their family, their faith, and their physician — not politicians.”

“Once that last brief is in, it is ripe for submission and consideration by the Supreme Court,” Patton said. “Theoret-ically, they could ask for additional briefing, but it’s always difficult to predict an appellate timeline. It could be a year, more than a year; it’s just all across the board.”

Attorneys are currently challenging another Oklahoma law that forces doctors to inform patients that medication abortions can be reversed, which they say has no medical basis. The law was also temporarily blocked late last month. In addition to the laws challenged in the suits, Oklahoma has passed other abortion restrictions, including a ban on the use of telemedicine to prescribe pills for medication abortion and a physician-only law that bans advanced practice registered nurses from providing abortion care.

Attorneys filed a new case in Oklahoma Nov. 8 challenging both those restrictions. This marks the sixth case attorneys for the center have filed against the state in just over five years.

“If we get these senseless laws off the books, we can expand abortion access in Oklahoma, which has very few abortion providers,” said Nancy Northup, president and CEO of Center for Reproductive Rights. “As clinics shutter across the country, telemedicine is a crucial way to keep services available.”

For Williams and other reproductive rights activists, reaching and connecting with people who are anti-abortion is difficult. That’s why they’ve launched an art tour campaign that asserts, “Fighting for abortion access is an act of love.”

“We’re trying to turn the conversation toward just highlighting the compassion that’s inherent in making sure people can get the care that they need. Too often the conversation turns into what a tragedy it is, but it really isn’t always like that,” she said. “When we equate this issue to compassion, it really fires people up. Whether that be good or bad, it touches people in a way that talking points like ‘Abortion is healthcare’ doesn’t.”

Only four health centers provide abortion services in Oklahoma. OCRJ provides an informational booklet on how to get an abortion that outlines accessible clinics; how to access financial aid; various procedures, laws and restrictions; local resources; and other information on legislation and advocacy. It is available on the organization’s website.

“I have a handful of personal friends who have [sought abortion care], and just watching the relief on their faces when they’re able to book an appointment or when they’re able to get that care that they need, it’s life-changing,” Williams said. “I’ve possibly never felt more satisfied and caring than I had when I was able to help someone do something that definitely put them in charge of their own lives and their own trajectories.”

For people that want to get involved in the fight for reproductive rights, Williams encourages getting plugged-in with local organizations.

“Seek out OCRJ, and we will give you instructions on which policies to lobby and how and who to reach out to. Or reach out to your local Planned Parenthood chapter, or plug into university campus clubs,” she said. “Me personally, I had no idea what I was doing. I did not know who I was meeting, but when I met them, they led me to just tons of new opportunities over the years. … Anywhere that you can just get your hands on information or things to be active over, it’s going to lead you to something else.”