The first half of Queen Caution’s name comes from her mother.

“When I was younger, I had a lot of self-esteem issues because I went to a dominantly white school, and I’m black and white,” Caution said. “So it was really hard for me to fit in. They were really segregated. When I would try to hang out with the white kids, they would make fun of me, make fun of my hair, call me messed-up names, racial slurs, and I was like, ‘OK. I’ll hang out with the black kids.’ I’d hang out with black kids, and they’d do the same thing. … I told my mom about it, and she called me a queen.”

The second half came a few years later, from the kids at school.

“We would put money on the table, and we would rap battle,” Caution said. “And I would always win. Nobody ever beat me at school. They started messing around and saying, ‘Oh, be cautious,’ … and I was like, ‘Wait. Queen Caution.’”

Caution celebrates her 20th birthday at Pisces Bash 8 p.m. Feb. 28 at View, 919 N. Virginia Ave. The show’s lineup features performances by local artists Deezy, Thomas Who?, Clixae, Kendell Jackson, WeRdoze and the Queen herself with music by DJ J Rocc. Though Caution won’t be old enough to drink at the show, she has been rapping for more than a decade.

“I think I started performing when I was about 7 years old,” Caution said. “I was in choir. I was in talent shows. I would write my own music as a kid, and I would also go and do ‘The Star-Spangled Banner’ at football games. I started off singing. … I always loved hip-hop, but I would rap other people’s songs. I didn’t write my own lyrics until I was 9 years old, but when I turned 9 years old, it was nothing but hip-hop from there.”

In her earliest songs, Caution talked about “bicycles, Barbies and Michael Jackson,” who she always preferred to Justin Bieber, but when she started high school, she began building a reputation as a fierce battle rapper.

“I believe every artist has somewhat of a dark past no one knows about,” Caution said. “I’m not a sociologist, so I wouldn’t know why they’re connected, but I do feel like being bullied a lot and being made fun of as a kid taught me later on down the road to stick up for myself, to keep my guard up. Essentially, you get tired of it. You get tired of being messed with, and that’s when you start to toughen up and you start finding ways to protect yourself. And for me, that was battle rap.”

Performing at open mics and Hubbly Bubbly’s Art of Rap competition, Caution finally found a community where she felt like she belonged.

“If you’re rapping, if you’re composing a song and nobody feels anything, then you’re not really making music.”
—Queen Caution tweet this

“When I first started, I felt like everybody was really supporting me and really into what I was doing, helping me progress and grow with my career,” Caution said. “That means a lot coming from where I come from. … When I got introduced to the scene, I didn’t feel alone. … I felt I was surrounded by people that love the same thing I do and want to do the same thing I want to do, and so I felt kind of home.”

Even within the world of hip-hop, Caution’s love of music made before she was born and her artistic approach can make her feel out of step with current trends.

“I’ve always been kind of different,” Caution said. “A lot of people, they roll around in the car, and they’ll listen to the latest new songs by Kanye or Future or whoever’s popping nowadays, but I just always connected more with the ’90s-, ’80s-style old-school hip-hop — Tupac, Brotha Lynch, Da Brat. That’s just what I connected with, and my dad would always play it in the car. … That’s what spoke to me the most. I felt it. I always try to stress heart to people. Music is a feeling. If you’re rapping, if you’re composing a song and nobody feels anything, then you’re not really making music. … Whether it’s about jumping around and having a good time, whether it’s about being sad or depressed — it’s all a feeling. I feel like a lot of these new school songs, they’re not coming from the heart. I don’t feel them. I feel like a lot of people, they just get in the studio and they just say anything random over a beat.”

With Pisces Bash, Caution said she hopes to bring more attention to local artists making heartfelt music and raise funds to record music on her own terms.

“I started realizing that nobody can see or hear my vision or what’s going on in my head,” Caution said, “so then I decided I got to do it on my own.”

Thomas Who? released his second album, Splash, earlier this year, but for his follow-up project — a collaboration with producer Nolo Ellis called The Anti-Socialites — Who “wanted to do something special.” The first release, an EP called First Draft is the product of Who, normally a self-described “meticulous MC” who strives for perfection, offering listeners a chance to hear the earlier stages of his creative process. 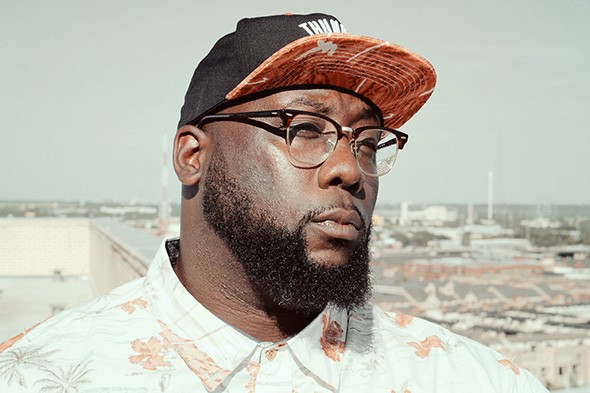 Second Draft features a new set of songs that are “a little bit more polished.” The project will culminate in Final Draft featuring Who returning to perfectionist mode.

“I just feel like listeners will appreciate going on that journey with us,” Who said. “Because of the body of the work that I put out already, I don’t think anybody has any doubts about my capabilities. This really gives me an opportunity to just freely be an artist. … It’s taught me to be able to give the fans a less perfect version of myself. Because we’re imperfect people and I put so much pressure on my art and how it’s displayed, I don’t know if I give people the opportunity to say, ‘OK, he’s an artist that can also paint abstract art. He’s not just a portrait artist.’”

A lifelong hip-hop fan, Who wrote poetry as a child. A friend “talking noise” persuaded him to rap in the lunchroom.

“So I just kicked a freestyle for the very first time,” Who said. “I’m 12 years old, and I made my peers go nuts. It was the first time that I felt that rush of somebody appreciating what I’m capable of doing. That was a feeling that I haven’t been able to shake all of these years later.”

Who said Caution’s art is also a work in progress with significant potential.