Oklahoma City Museum of Art’s Renewing the American Spirit: The Art of the Great Depression showcases the many meanings of art restoration.

Renewing the American Spirit: The Art of the Great Depression

Oklahoma City Museum of Art recently acquired an artwork so big there was basically no choice but to create an exhibition around it.

Gardner Hale’s mural “Triumph of Washington” — nearly 14 feet tall and 24-and-a-half feet wide — is essentially the centerpiece for Renewing the American Spirit: The Art of the Great Depression, on display through April 26, 2020 at the museum, 415 Couch Drive.

“Really the only place that mural will fit is in our special exhibition gallery,” said assistant curator Jessica Provencher. “It does have almost an entire wall to itself.”

Hale, who The New York Times called “one of America’s foremost young painters of murals and frescoes,” died in a car accident Dec. 28, 1931 at the age of 36. He painted the mural, which depicts the first U.S. president leading troops on horseback with a 20th-century cityscape in the background, in 1931 for an exhibition commemorating George Washington’s 200th birthday in 1932, and it was not publicly displayed again until Renewing the American Spirit. Unrolling the mural revealed stains, tears, lost paint and water damage, but “Triumph of Washington” was restored with a Bank of America Art Conservation Project grant.

Provencher said the mural’s idealized vision of American history was a common theme in Great Depression era art and evident in several pieces throughout the exhibit.

“A lot of artists in the 1930s were looking back to the past, to American and local history and historical figures, so that mural gave us an opportunity to explore another side of the Depression,” Provencher said. “It kind of puts them in a different context, in a different light.”

“A lot of the artists, especially the artists that worked with the New Deal art projects, they thought art could help enliven the broken American spirit, that it could raise national morale,” Provencher said. “They didn’t necessarily want New Deal artists to create works that were entirely negative and that showed a lot of the suffering that people were experiencing at that time. A lot of the works you’ll see are more uplifting and promising, and they’re hopeful, maybe idealistic. Some of them look to the future, what they hope for the future, or they’ll look to the past, remembering a better time, showing these historical figures that had triumphed over adversity to remind people at that time that they could also conquer the difficulties that they were facing.”

“Definitely one of the things that the New Deal art projects did was try to make American art accessible and bring it to the American people and integrate it into their daily lives by putting art in public places, like the post offices and schools — there’s a mural down the street at Wilson Elementary,” Provencher said. “They were dedicated to doing this throughout the country in both rural and urban areas, trying to bring art to people, but also they set up nearly 100 art centers across the country, where they not only exhibited art, where people could come see art from different artists throughout the country, to be introduced to different styles and different artists, but also they could take classes and learn about art.”

When visitors enter the exhibition, they get a less idyllic view of the Great Depression from photographs such as Dorothea Lange’s “Migrant Mother (Destitute pea pickers in California. Mother of seven children. Age thirty-two. Nipomo, California)” and Arthur Rothstein’s “Dust Storm, Cimarron County, Oklahoma.” Provencher said understanding the difficulties people faced in that era is important for appreciating the context in which the artworks were created. 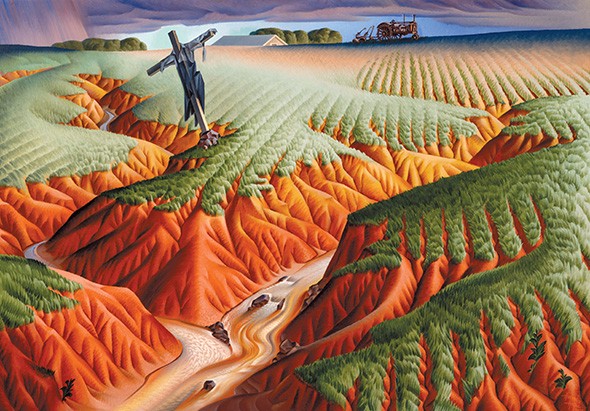 “You see the reality first,” Provencher said. “You learn what people are going through, and then you look at the art that was produced in response to that. It kind of paints this revealing portrait of people at that time. … You see that they’re trying to find a way to move ahead. … The emphasis on some of these idealistic scenes, the scenes that they thought maybe were comforting is really interesting. It just kind of speaks to just how difficult a time it was that they were depending on art to try to help raise morale and comfort people.”

While many artists attempted to capture the Depression’s stark realities, others tried to give viewers an opportunity to look past them.

“Some artists at this time looked to popular entertainment, so they pulled their subjects from the circus, amusement parks,” Provencher said. “Some artists focused on mundane details of everyday life like walking home after work instead of focusing on people that were suffering.”

Even without focusing on the hardships, many artists captured them by simply having an eye for detail.

“There’s a certain tone,” Provencher said. “People have these somber faces. You can tell this is still a difficult time. It kind of evokes what’s going on in that period. … [One painting] seems like a nice rural landscape, but when you look closely, you’ll see some people hitchhiking in the background. So even though overall it doesn’t seem so negative, when you look closely, you’ll see hitchhiking was something that was quite prominent in the 1930s. When you didn’t have a lot of money, you had to find another way to get around, and there were millions of people that didn’t have a lot of money.”

While aspects of life in the late 1920s and ’30s can be hard to imagine in the present day, Provencher said there are lessons we can apply to our lives.

“We definitely don’t want to compare the Depression to our own time,” Provencher said. “It was such a challenging time and time of uncertainty for people, and there can be some parallels. We’re in a challenging time for some people, and people consider this a time of uncertainty. … There are a few things about the Depression that people can relate to. Poverty has not gone away. It’s still a thing that a lot of people face. … We ask people to consider some of these parallels and ask them how they find hope in the world today after seeing how some of these artists found hope.”