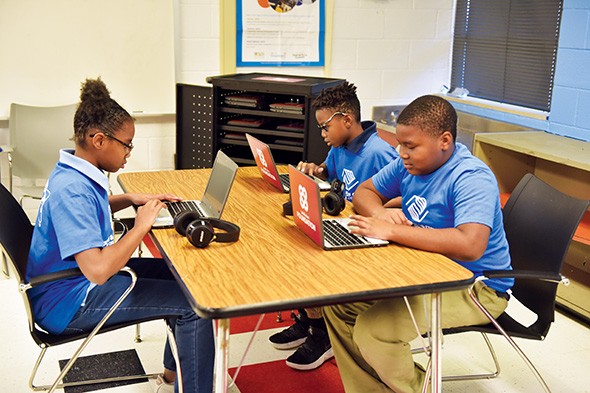 With the donation of a dozen Google Chromebooks to Boys & Girls Clubs of Oklahoma County came the first time Sophia Stoller, a 45-year-old mother of four, witnessed children who were too excited to eat cupcakes.

“They didn’t blink an eye when I told them we had dessert for them too,” Stoller said. “They were so excited; they couldn’t take their eyes off of the computers.”

While children’s infatuation with technology might frustrate many parents who work to place screen time limitations on their own kids, it was a welcome reaction from the children of Boys & Girls Clubs at Oklahoma City’s Telstar Elementary School. On Nov. 15, Dallas-based nonprofit organization WorldVentures Foundation donated 12 Chromebooks, headphones and a workstation to the organization.

“Most of these kids don’t have computers at home,” said Jane Sutter, president of Boys & Girls Clubs of Oklahoma County.

Before Stoller, who works as WorldVentures executive director, and her team surprised the children with the new computers, she asked the group of about 100 how many of them have a computer at home.

“Three of them raised their hands,” she said. “I was shocked.”

The lack of access to computers and the internet goes beyond Boys & Girls Clubs of Oklahoma County.

According to a 2015 study by the U.S. Census Bureau, 31 percent of Oklahomans lack access to the internet through a home computer. The study also revealed that fewer than 50 percent of families with incomes under $20,000 have internet access at home. That percentage is telling for the 90 percent of students within the Oklahoma City Public Schools district whose families live under the poverty level, Sutter said.

These statistics and others led Stoller and her team at WorldVentures to set their sights on Boys & Girls Clubs of Oklahoma County.

“While it might not be thought of as a luxury to many, access to the internet is just that,” Stoller said. “Those of us who have it take it for granted and those of us without it are at a huge disadvantage.” 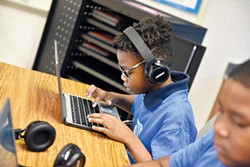 According to a study executed by low-cost wireless provider Kajeet, seven in 10 public school teachers across the United States assign homework requiring internet access and one in three students across the country don’t have access to the internet at home.

Likewise, the study revealed that students who have access to the internet from home have higher high school graduation rates and grades overall.

Younger students use school computers to access the online reading tool MyOn, and older students can use internet access to fill out college admission applications and submit homework by using the online Google file-sharing tool Dropbox.

Morton said several students in the district utilize a free online learning tool called Summit Learning, on which lessons are personalized for each student and tailored to meet their learning potential.

“I can’t believe the growth I have seen through this program,” Summit Learning user and Oklahoma City Public Schools teacher Miranda Crowell said. “I think students enjoy learning more with this program.”

Crowell teaches fifth- and sixth-grade English with the assistance of the Summit Learning program.  She said the program calls for one hour of in-class computer time with the remaining class time allocated to exercising the lessons learned online through writing book reports or working together on group projects.

“My favorite part of the program is the mentoring it has brought to our school,” Crowell said. “It’s a simple idea that was brought to our attention through this national online program. It really helps debunk the idea that computers do more harm than good in the classroom.”

Summit Learning’s mentoring program calls for each student with access to the online program to pair with a teacher or school administrator. The duo meets once a week, Crowell said, to go over the student’s life and academic goals.

“We see our students continuously throughout the week,” Crowell said. “But we are in ‘go mode’ constantly. We are always going over assignments and performance. For some of our students, their 15 minutes with their mentor is the one time they have to just take a break and talk about anything they’d like to talk about.”

Currently, at least 10 teachers in the district use the Summit Learning program for classes in fifth to eighth grade. The district first began utilizing the online learning tool in 2015.

Mid-Del School District teacher Aaron Baker said computers are utilized by his government class at Del Crest Middle School and his students don’t mind sharing computers when they have to.

“When used appropriately, the internet can enhance a student’s education,” Baker said.

He said what makes learning online appealing to students is that most online education programs offer lessons in which students learn through playing games.

“It’s not a substitute for student-teacher dialogue, but it’s a big help,” he said.

“This is a big deal for them,” she said.

Telstar Elementary is one of four locations where Boys & Girls Clubs of Oklahoma County operates. Telstar Elementary sees about 100 children with the organization every week. Children range in age from 6 to 18.

Because the Chromebooks are stationed at an Oklahoma City public school, they are monitored in the same way all public school computers in the district are and users are unable to access social media websites or graphic content.

Children will, however, have a safe and comfortable place where they can work on their homework online, even if doing so means taking turns using the newly donated Chromebooks.

“It’s not enough,” Stoller said of WorldVentures’ contribution. “I left the Boys & Girls Club well aware of that. Twelve computers for 100 kids who likely don’t have any access to a computer at all is not enough. We’ll definitely be back.”