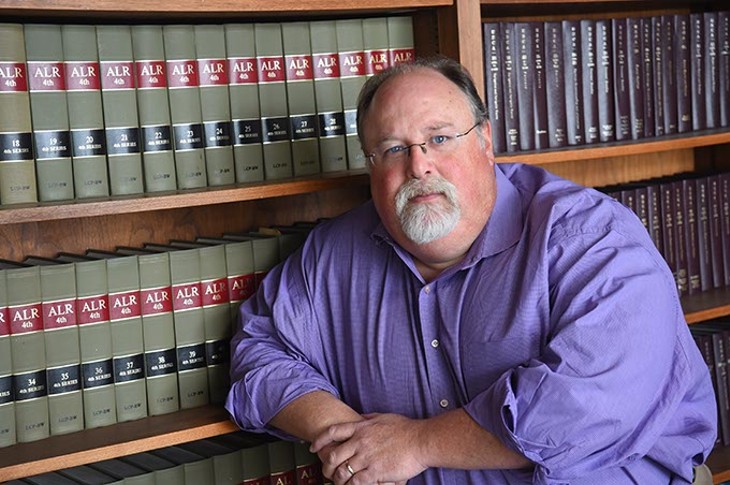 Carter, whose work at Oklahoma Watch and The Journal Record shined a light on poor care for military veterans, criminal justice abuse, state budget shenanigans and tribal water rights, will now tell the stories of Oklahomans whose rights the ACLU defends.

“It’s exciting to do something near and dear to my heart,” Carter said. “I think there are a lot of important stories there, with real people being affected, and they don’t all get told.”

ACLU Oklahoma Executive Director Ryan Kiesel said the position is considered an innovative one for ACLU around the nation.

“We didn’t just want someone who would put out press releases,” he said. “We wanted someone with investigative skills, capable of digging into stories and sharing the truth with the people of Oklahoma.”

Carter grew up in Yale, Oklahoma, where he bristled against his high school’s ban on facial hair and led a successful protest for freedom of expression that involved grease paint mustaches sported by both boys and girls.

Few people are more deeply familiar with the machinations of state government than the old-school newspaper writer. Although he stepped away from journalism for a dozen years to do marketing and media relations, he returned to reporting in 2002.

Since then, Carter has won accolades for his stories on water rights and problems with the state’s care of elderly veterans. Carter also revealed that school buildings in Moore that collapsed in 2013’s EF5 tornado were shoddily constructed, resulting in seven student deaths and 24 students and teachers injured. Most recently, he wrote about the onerous fees and costs levied on prison inmates and their families.

“In 2013, [Carter] was named one of the state’s top three political reporters by The Washington Post’s blog The Fix. Carter is also a four-time winner of the Associated Press-Oklahoma News Editors Sweepstakes Award for public affairs and investigative reporting,” according to a media statement from the ACLU of Oklahoma.

Jaclyn Cosgrove, past president of the Oklahoma Society of Professional Journalists, recalled Carter’s exposé of a conspiracy to gut the state environmental agency’s budget.

“It was House of Cards-type stuff,” Cosgrove said. “Scott is a great storyteller. His work is not only thorough and accurate but also great to read. And Scott is passionate about the reasons journalism exists, about holding people in power accountable.”

Carter will still be in the thick of things at the ACLU, as it has been a player in several recent hot-button issues in Oklahoma. It has lobbied — with mixed success — to defeat bills limiting abortion, protecting “conversion therapy” for LGBT people and prohibiting the wearing of hoods and masks.

On June 30, the organization won a major victory when the Oklahoma Supreme Court ordered a monument of the Ten Commandments to be removed from the state capitol grounds, saying it unconstitutionally used state property to support a religious belief.

Kiesel said the chapter is increasingly playing offense as well as defense legislatively. A major success this year was the loosening of mandatory minimum sentencing laws for certain offenses.

“It’s never a slow day at the ACLU, but I’m excited to say we’re growing in both capacity and relevance,” said Kiesel. “An ongoing issue for us is the protection of privacy, especially in the age of drones, and we’ll continue to look at civil asset forfeiture.”

Carter is eager to do the reporting that will illustrate the ACLU’s impact.

“I think Oklahomans care about each other,” he said. “But at times, some of our policies really clash with the Bill of Rights and the Constitution, and people need to question those decisions. People need to know what’s going on so they can be involved and maybe bring about change.”