Racist and anti-LGBTQ+ graffiti is plastered on the office housing Oklahoma Democratic Party. 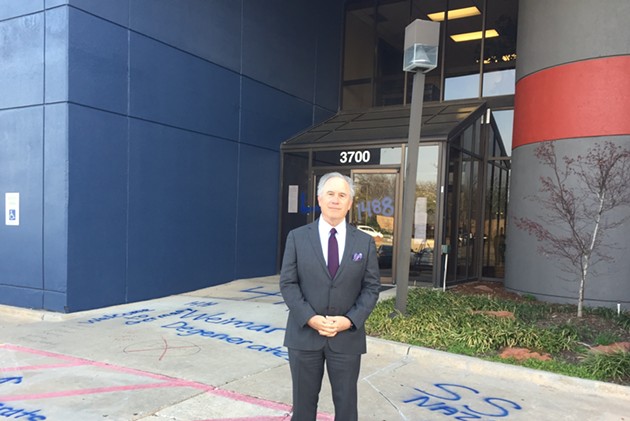 Around 6 a.m. Thursday, former governor and first lady David and Rhonda Walters received text messages from their maintenance director, who oversees the Walters’ commercial real estate. The building they own at 3700 N. Classen Blvd., which houses Oklahoma Democratic Party, Boys & Girls Clubs of Oklahoma County and other organizations, had been hit with racist graffiti.

Walters said that Oklahoma City Police Department is currently reviewing security camera footage and conducting forensic examinations of both a manifesto that was taped to the building’s front door and a cardboard sign that was posted.

Due to the nature of some of the graffiti, Walters said he believes Oklahoma Democratic Party was the target of the attack.

“I believe it is,” Walters said. “The letter had a notation on it that said, ‘Trump Pence Hitler 2020,’ with a big swastika. My sense is that it was directed at the Democrats.”

In addition, the number “1488” was spray-painted on the front entryway. According to Anti-Defamation League, the number signifies two things. “14” refers to the “14 words” slogan created by David Lane, a member of the white supremacist group The Order,” which reads, “We must secure the existence of our people and a future for white children.” “88” signifies the eighth letter of the alphabet, H, and “HH” is an abbreviation for “Heil Hitler.”

Walters, who was the 24th governor of Oklahoma from 1991 to 1995, said the attack on the party headquarters speaks volumes about the U.S.’s current political climate.

“There is a divisiveness in our culture at the moment driven by hateful rhetoric, the likes of which we haven’t seen out of our leaders in a very long time, if ever,” Walters said. “I think it does encourage and license this kind of behavior. You read about it nationally; you don’t think it’s going to arrive on your doorstep. Now, literally, it’s on our doorstep.”

Roberta S. Clark, executive director of Jewish Federation of Greater Oklahoma City, said Oklahoma City Police Department (OKCPD) reached out directly to her organization Thursday morning. She said that while there has not yet been a formal report from OKCPD, she expects that the attack will be found to be a hate crime.

“The nature of hate crimes … is it is targeting people because of their immutable characteristics,” Clark said. “It’s about who they are and what they believe. Members of the Jewish community will be fearful and be upset. All of it is horrific. None of it should be acceptable in a civil society.”

“None of us know when we will be witness to something or victim of something,” Clark said. “We’re always talking security.”

Walters said there is a continuing debate on whether such acts should be publicized or simply not discussed in order to deprive hate groups of any publicity. He said that at times like this, reasonable people must speak out against hate.

“I think it’s better to make a statement, for people to talk about how inappropriate that is in a state like ours,” he said. “Our state particularly, although we are very conservative, is known to be a friendly, hospitable place. This kind of behavior is so out of character for most Oklahomans, and I hope our leaders will speak to these kinds of incidents and underscore what appropriate behavior is.”

However, Walters said that national leadership has played a role in fomenting and energizing hate groups, leading to a rise in activity by white supremacist organizations such as Identity Evropa, which rebranded itself as American Identity Movement earlier this month. The group has posted stickers and flyers in high-traffic areas of Oklahoma City, including Midtown, 16th Street Plaza District and Deep Deuce.

“It used to be such a forbidden activity; it was not encouraged in any way, shape or form; it was addressed by our leaders as being something that was just so out of the bounds of both the American character and our culture and society,” Walters said. “And that’s no longer the case. The view now is that it’s good politics to get your base so riled up that, given the way our system is structured, you can win without a majority. The result of that political strategy is to give license to this kind of behavior. There are not ‘good people on both sides’ of this issue.”

Clark encourages Oklahomans to speak out about the attack.

Moving forward, Walters said there is much work to be done to combat hate in Oklahoma. His first step is to remove the hate symbols and phrases that cover his property.

“In my case, it’s power-washing and painting,” he said. “But I hope leaders will speak out. This will probably get quite a bit of publicity, this hate crime, and my hope is that the perpetrators can be brought to justice and, in the meantime, leaders can make a comment about coming together and how inappropriate this expression is.”