ACT offered to all Oklahoma juniors at no cost 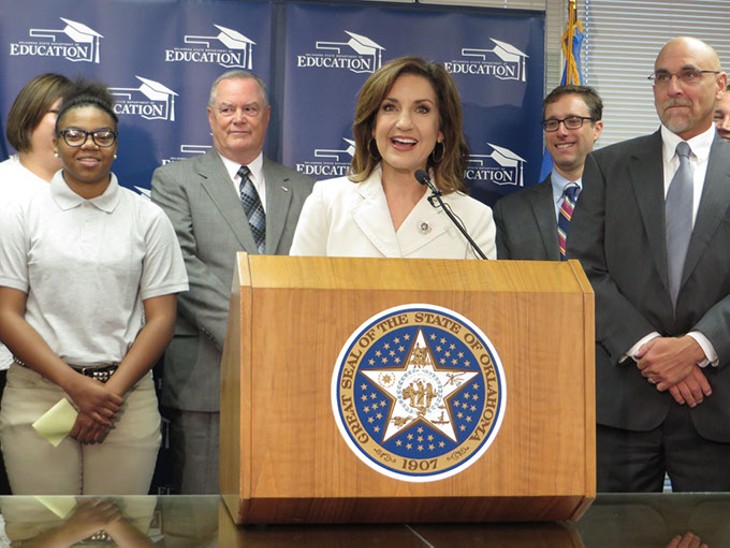 “This pilot is something that we know will change lives and will also lift our state,” Hofmeister said at a press conference last Wednesday.

The Oklahoma State Department of Education estimated free ACT tests will cost about $1.5 and allow an additional 22,000 students to take the test who wouldn’t otherwise be able to.

Previously, students paid compulsory test-related fees or applied for fee waivers that required documentation of their parents’ income. Now, it is free for any junior who wants to take it.

Also, the program calls for exams to be administered during school hours instead of Saturdays, lessening the burden on working students who often would have to request time off or take unpaid leave in order to take the tests.

The new test time also removes a barrier that rural and low-income students encountered when finding or paying for weekend transportation.

ACT is an abbreviation of the exam’s original name, American College Testing Inc. The nonprofit group reported that over 1.84 million high school graduates took the test in 2014. It was first offered in 1959 as a competitor to the Scholastic Aptitude Test, now known as the SAT.

The Cooperative Council for Oklahoma School Administration recently reported that almost 400 school district leaders across the state, including 18 in Oklahoma County, support using one academic school day to voluntarily administer no-cost ACT tests to high school juniors in their districts.

Oklahoma City Public Schools Superintendent Rob Neu also highlighted benefits of the pilot program, which is voluntary for both school districts and students.

“I like to think about public education as not being a competitive sport that produces winners and losers,” Neu said. “Our job is to not select or sort kids in or out but to give them the opportunities to be successful in our system.”

This year’s Oklahoma City Public Schools numbers show that 1,700 juniors are enrolled in the district. Spokeswoman Tierney Tinnin said the initiative allows a large number of them to take the ACT.

School leadership wasn’t the only group to praise the announcement. Millwood High School junior Teria Rogers told Oklahoma Gazette “the majority of [her] friends” couldn’t take the ACT before due to work and travel conflicts.

Hofmeister agreed and added that those conflicts also were impediments for many rural and urban students. Some traveled as far as 50 miles to get to testing sites.

“I would venture to say a minimum of 90 percent of [students] use the fee waiver,” she said.

Sixty-three percent of Classen juniors took the ACT last year. Coleman predicted far more will be able to take the no-cost exam this year, which also allows them more valuable test-taking experience. She said students can then apply for up to two fee waivers if they need or want to retake them later.

However, some members of the Oklahoma House of Representatives criticized the pilot program and how it was funded.

Rep. Jason Nelson, R-OKC, focused on the $1.5 million price tag, arguing that Hofmeister “has identified a surplus of $1.5 million.” He countered that those funds should instead be used to help shore up a third-grade reading program.

Speaker of the House Jeff Hickman, R-Fairview, also objected, saying the Legislature learned of the program only a week before it was announced. He said the project announcement goes against legislation passed last year that requires new education standards to be developed “before making any further testing decisions.”

At last week’s press conference, however, Hofmeister reminded the public that the ACT is not a state-mandated test; it is a national standardized test, and students decide whether or not they will take it.

All four-year U.S. colleges and universities use the ACT in some way to help them determine student admission.

The Cooperative Council for Oklahoma School Administration recently reported that almost 400 school district leaders across the state support using one academic school day to voluntarily administer no-cost ACT tests to public high school juniors in their districts. Below are how many district leaders in Oklahoma County and surrounding counties endorsed the initiative.