OU’s theater department took an uncommon approach to rehearsal to prepare for its production of The Wolves. 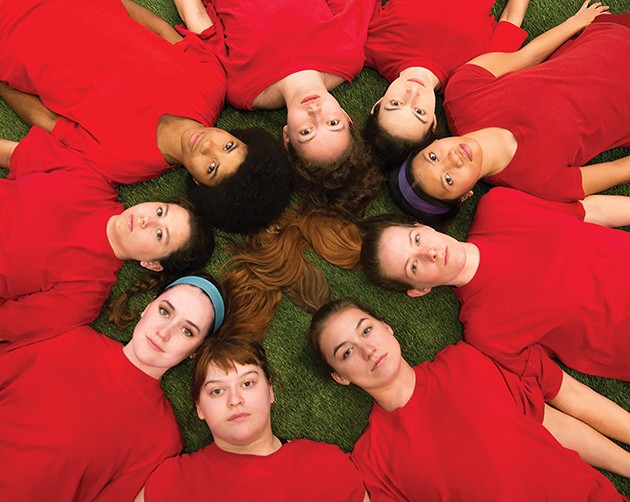 Though audiences for the University of Oklahoma production of The Wolves are warned about adult content and strong language, they don’t have to worry about getting hit by errant soccer balls — probably.

“We’re trying to keep the balls on the ground,” said Judith Midyett Pender, director of the upcoming University of Oklahoma (OU) production of the 2017 Pulitzer Prize-nominated play. “There’s no intentionally putting balls in the air ever. So it could happen, but I think the chances are slim.”

Presented by Helmerich School of Drama and University Theatre, The Wolves runs Oct. 25-Nov. 3 at OU’s Weitzenhoffer Theatre, 563 Elm Ave., in Norman. Staging Sarah DeLappe’s play — which features an all-female cast, most of whom are identified only by their jersey numbers, and is set exclusively during a high school soccer team’s weekly pre-game warm-up drills — comes with an “extra layer of requirements,” Pender said.

“The women cast in this play have to learn how to drill with soccer balls, and one of the drills required in the script is a very complicated drill, and they have to look, not just proficient, but they have to look like they are national quality high school soccer players,” Pender said. “Because of the way it’s written, because they’re drilling all the time that the scenes are going on, we had to work separately on the physical work and separately on the text work.”

“The soccer is the vehicle, but the things on the mind of these young women are the actual plotline, the subject.”
—Judith Midyett Pender tweet this

Assistant director Emma Anton-giovanni, a former soccer player, was an “invaluable resource” for teaching the cast the soccer drills, including the intricate “spider web,“ but beyond the play’s physicality, the complex, realistic dialogue is a challenge in itself.

“Because they’re 16- and 17-year-old girls, the dialogue is written in a way that they talk over the top of each other quite a bit,” Pender said. “A lot of the dialogue has no punctuation at all. They’ll say two words and then three or four words and then three or four more words. They use the word ‘like’ an awful lot, as teenagers do. They also use quite a bit of salty language. They’re trying that out, and they talk at the same time. Sometimes there are two different conversations going on simultaneously, and sometimes there are three. And they all inform each other, so if they are perfectly timed, something that one person says to the person they’re talking to about their subject matter also, coincidentally, has relevance and comments upon another conversation that they’re not directly involved in. It’s beautifully constructed.”

The play requires its cast to become so comfortable with the drills that they “look like it’s something that they do all the time and don’t even have to think about really” in order to allow the audience to also focus on the conversations taking place during the drills, which convey the play’s actual meaning.

“It’s not really about soccer,” Pender said. “It’s about what it is to be young women on the verge of becoming adults and all the eagerness for that to happen, but also all the fear and trepidation and all the unknown about that. This play uses soccer kind of as a metaphor. It’s very much like soldiers getting ready for battle, and they’re getting ready to go out on the field and battle other young women playing soccer, and they’re preparing to meet this challenge. Meanwhile, they’re discussing all the other challenging things that occur in the lives of 16- and 17-year-old young women, and the soccer is second nature to them. If the soccer were pedestrian in a way that drew attention to the people playing it, it wouldn’t do what the play is asking it to do. The soccer is the vehicle, but the things on the mind of these young women are the actual plotline, the subject.”

In an interview with The Economist, DeLappe also compared her young characters to soldiers and the play itself to a war movie.

In the same interview, DeLappe said she was inspired to write the play by the lack of satisfying roles available to her as an actress.

“I was staring down the barrel of what it means to be a young woman in this industry, how it entails objectifying yourself and putting yourself out for roles like the stripper with a heart of gold or the girlfriend until you’re the mother,” DeLappe said.

When Pender was studying theater in school, she said roles like those in The Wolves were uncommon.

“We did classic American mid-20th-century stuff, and we were basically kids playing grownups,” Pender said. “I played Mother Burnside in Auntie Mame, and she’s ancient and in a wheelchair, and I was in high school.”

Pender said the characters in The Wolves are familiar and relatable, even if they aren’t commonly seen on the stage.

Times have changed, but people are not much different, Pender said.

“Normally, when you direct a play, you come in, and they have their script, and you give them the blocking, and they write it down, and you walk through it and see if it works,” Pender said. “And that was totally impossible in this situation, so I had to kind of come up with a new way to work. That’s very exciting, but that also makes you feel kind of vulnerable sometimes. I’ve worked a certain way with certain kinds of plays, and then here’s one that doesn’t really fit into the mold of any of those things. I have to say, it was quite a relief and really fulfilling when we first put the text and the drills together and it was working because it was an idea and a plan, but we didn’t know if it would work for sure or not.”