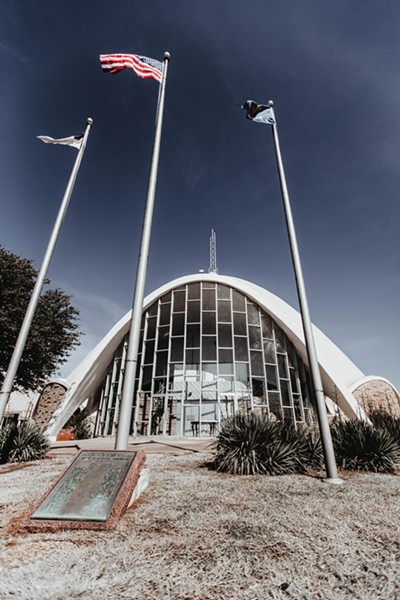 On Friday, a resolution was added to the Oklahoma City Council agenda for May 7’s meeting but was then deferred to May 21. If passed, it would withdraw the application to designate First Christian Church a historic landmark overlay district. Historic Preservation Commission (HPC) voted to initiate the process April 3, which also started a 180-day moratorium on demolition.

“Whereas, the City Council, as the legislative body of The City of Oklahoma City, believes it is in the best interest of the City to withdraw the application for the designation of the Property,” reads the resolution.

On April 21, Crossings Community Church announced it was interested in purchasing the church to use as a satellite campus. In the announcement, officials said they had “no plans of demolishing the current structure, but rather to have it continue in its originally intended use as a church.”

Despite the fact that First Christian Church lies in his ward, Ward 2 councilman James Cooper said he did not know about the resolution until Friday.

Another consequence, Cooper said, is that he does not know what he will do.

“Because I was not a part of this process, I am now in a position where I have no idea what I’m going to do on Tuesday because I don’t know what’s going on,” he said. “I am interested in whatever it takes to preserve that building, but here is the main question I have: How do we know that 50 years, 25 years or 100 years from now, we’re not going to be right back in this exact same position if we remove the historic preservation part of this?”

The resolution is sponsored by Ward 1 councilman James Greiner, Ward 4 councilman Todd Stone, Ward 5 councilman David Greenwell and Ward 8 councilman Mark Stonecipher. They could not be reached for comment.

When HPC voted to start the process of evaluating a historic landmark overlay for First Christian, it started a 180-day moratorium on demolition or significant changes to the structures. As of May 6, there are 147 days left on the moratorium. At the end of that period, the city council will have ultimate approval. The resolution by Greiner, Stone, Greenwell and Stonecipher would vacate the process with less than five months remaining on HPC’s moratorium.

Former Ward 2 councilman Ed Shadid, who introduced a resolution to designate First Christian Church a historic landmark before HPC, said he was saddened by a “breakdown of decorum” and ignorance of decades of precedent.

“I think it's really sad and discouraging as to what the future brings for this council if they can’t abide by just basic standards of decency,” Shadid said. “I can’t even put into words how uncool it is. The idea that you would have four people co-sponsor a resolution in somebody else’s ward and then not tell them about it … to just try to squash any historic preservation efforts in such a heavy-handed manner is what I mean by ignoring decades of precedent and decorum.”

Shadid also said Stonecipher, who is a member of Crossings, should recuse himself from the vote. Cooper did not comment on the conflict of interest, but he encouraged his constituents and others who care about historic preservation to attend the council meeting.

“Over 2,500 people elected me to represent them on Feb. 12,” Cooper said. “I would encourage all people in Ward 2 … and anybody else across the city to come to city council on Tuesday morning, listen respectfully to the reasons why this proposal was put forth — just as I will be listening respectfully — and then engage in a dialogue with the four council people who thought this was that important to put forth this resolution. It is critical that all voices feel heard.”