"The rhetoric of ISIS against the LGBT community isn’t much different from a lot of people on the Christian right," Schonauer said. 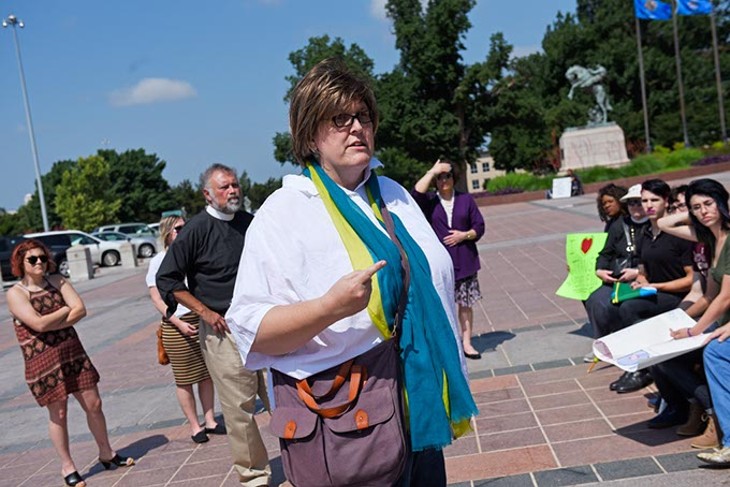 Perhaps the people accustomed to living outside the constraints of “Normal America” are the ones who can see it most clearly.

Maybe the distance clarifies things, like an astronomer peering at a constellation.

Maybe it’s self-defense. It seems logical that a lifetime of fending off attacks would narrow the floor of one’s survival instinct down to a single plank that has been landed on for centuries: Know your enemy.

In a combative culture, animosity has become a virtue. The political team one roots for is sometimes more important than winning percentages, and it can be embarrassingly easy to be swept up in the emotional torrent of any issue when it becomes Us versus Them.

Paula Sophia Schonauer doesn’t work that way. When answering questions about issues that push the hottest of Normal America’s buttons, she’s magnanimous and diplomatic. When asked about a topic that would grind some conversations to a halt, her responses are measured, thoughtful and logical.

The 50-year-old Oklahoma City professor and graduate research assistant made history as the city’s first openly transgender police officer, a move that was indisputably and bipartisanly brave.

She also is an Operation Desert Storm veteran and a published poet who lost the 2014 race for OKC’s House District 88 by a scant 22 votes.

When she was asked about the grisly, early-morning nightclub shooting June 12 in Orlando, Florida, in which 49 gay, lesbian, queer, transgender and minority community members were murdered, her answers resonated with a kind of calm authority that sounded a lot like a person making sense.

Maybe that’s because she has had a lifetime to think about it.

“Obviously, I was shocked when I first heard it, but my second thought was, ‘Here we go again,’” Schonauer said during a recent telephone interview from Washington. “This is happening more and more, and I know that it’s easy for some people to say that this was an ISIS target or call it another radical Islamic attack, but the rhetoric of ISIS against the LGBT community isn’t much different from a lot of people on the Christian right.

“We have plenty of American pastors going out and pronouncing that the LGBT community is evil, that it’s within a Christian’s duty to kill gay people. What’s the difference between that and some imam telling other religious radicals to do the same thing?”

Schonauer recognizes that there are fringe elements within Christian and Islam religions but does blame an atmosphere of intolerance for breeding the Omar Mateens and Dylann Roofs of the world.

“There are people who are true heroes in both religions. I know people of all faiths who offer the world love, acceptance and goodwill whenever they can,” Schonauer explained. “But we do have a history of people in both religions that have gone out and done things like this. I think the rhetoric that’s being thrown around at LGBT people throughout the country has fostered an environment of intolerance that encourages these kinds of actions.”

Schonauer cited a June 1 Advocate article, “James Dobson: Be a Man, Shoot a Trans Woman in the Bathroom,” in which the LGBT news magazine called out conservative author James Dobson, who perpetuated transgender myths in a May 30 column on the conservative WorldNetDaily website.

Dobson wrote, “If you are a married man with any gumption, surely you will defend your wife’s privacy and security in restroom facilities. … If this had happened 100 years ago, someone might have been shot. Where is today’s manhood?”

“When those kinds of outrageous comments get tossed around, people on the fringe start wanting to make a name for themselves,” she said. “They don’t feel as isolated in their ideas, and they start to want to live up to what their leaders are saying, so they go do it.”

When asked about the recent transgendered bathroom battle launched by lawmakers across the country, Schonauer again backed up and took a wider view. She sees it as a natural, almost sociological progression from the protracted debate over allowing gay marriage.

“The beginning of all of this is the backlash from the marriage equality battle,” Schonauer said. “Marriage equality happened, so now organizations are just looking for another fissure in the culture wars to pry open. Boom; there’s transgender people, so that’s next. You jam a wedge into it and try to pry it open. It’s a great way to keep the culture wars alive and well.”

Schonauer also said those same culture wars are an easy way to manipulate voters, a strategy that has obviously paid dividends to Oklahoma legislators.

“The transgender debate has created this hysteria that’s really a solution looking for a problem,” she said. “It’s a smokescreen. It’s quite the distraction after the Legislature passes a budget that they’re not particularly proud of, when they don’t want people to look at what they’re doing in any detail. So they throw transgendered people — transgendered children, actually — under the bus, which is despicable in my opinion.”

However, the problems facing Oklahoma go beyond social issues, and Schonauer addressed those concerns first when asked about the local political climate.

“One of the first things we’ve got to do is diversify our economy,” Schonauer said. “When you’re so dependent on the oil and energy industry that a downturn causes a budget crisis for our state government where essential services are threatened, something is wrong.”

Schonauer is also willing to let Democrats and Republicans share blame for the state of affairs in Oklahoma.

“I really feel like both parties need to offer something that people really care about, but mainly, I think the Democratic Party needs to start being a real alternative instead of just trying to be ‘Republican light,’” she said. “There are some natural issues that the party could really rally people around, like living wages, unions, letting people organize the infrastructure that they need.

“But right now, the debates have gotten so ridiculous that voting for an infrastructure budget to repair roads and bridges is called ‘socialism.’ We have to offer people an alternative to that.”

Despite the mountain ranges still to cross for the slow-moving wagon train of Oklahoma progressives, Schonauer remains an optimist. She said she’d consider another run for office if she felt the community compelled her to, and she has high hopes for a state whose Republican party currently controls the government. In an interest of fostering those hopes, she said she’d like Oklahomans to know two things about their transgendered neighbors.

“For starters, if you have an opportunity to hire a transgendered person and have them work for you, you’re very likely to have an extremely dedicated employee,” she said. “It’s really hard to find a job as a transgendered person, so we when do find one, we’re very grateful. We want to make sure we do well enough to secure our positions.”

Her second answer should resonate with Normal America due to its kindness and logic.

“The other thing I’d like people to remember is that when people start expressing their inner truths, that’s after a long battle of trying to conform,” Schonauer said. “It’s not an overnight decision. It’s not like a person wakes up today and says, ‘I’m gonna be a woman today and go into a restroom and threaten your daughter.’”

She stressed that nobody’s threatening anyone.

“I think the climate will change and the scariness will be overcome,” she said. “I think most Oklahomans are fair-minded people and they care about a person’s character first, and that’s why, eventually, transgendered people will continue to gain acceptance in Oklahoma. I don’t know; maybe I’m being Pollyanna. But my name is Paula.”