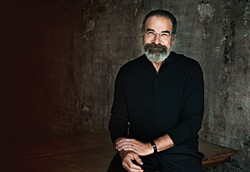 Mandy Patinkin prides himself on constant movement, and his life shifts gears as often as the setlist changes for his concert series, Dress Casual. When Patinkin performs 8 p.m. June 18 with Oklahoma City Repertory Theatre at Oklahoma City Community College, the Homeland star’s entire repertoire will be up for grabs.

“I just did three concerts, and I enjoy doing a lot of the material, but I keep readjusting it — taking this out, taking that out if it goes too long or needs an energy adjustment,” Patinkin said in a recent phone interview. “And I have songs that just speak to everything, so I play it by ear. And I’m sure that by the time I get to Oklahoma City, I’ll have changed the setlist 10 times. I’ll probably change it five minutes before the concert, or even during the concert.”

Patinkin constantly keeps pianist Adam Ben-David on his toes with these changes, but the singer and actor maintains a clear perspective on what it means to live dangerously. Last year, Patinkin volunteered with International Rescue Committee, a global humanitarian aid organization helping relocate Syrian refugees. He flew to Greece and provided aid to refugees arriving by boat via Turkey and worked to relocate them to new homes in Germany.

“The human rights work that I did with Syrian refugees, meeting them through the International Rescue Committee, changed my life forever,” said Patinkin, who is 63 years old. “I met families that I was able to help get from Greece to Germany, and I met Syrian refugee families in Elizabeth, New Jersey, and I’ve spoken with directors from the International Rescue Committee who work in, I think, 55 countries around the world — all these young people who do this extraordinary work for human beings who are literally fighting for their lives.”

Since that experience, Patinkin has taken trips to Cambodia to work with political refugees in a country still reeling from the genocidal atrocities of the 1970s. Patinkin said that the current U.S. political climate in which Republican presumptive nominee Donald Trump’s campaign centers on deportation and closing borders underlines the importance of a fact-based discussion of the refugee crisis.

“This is the definition of a true American crime,” Patinkin said of Trump’s campaign. “We are all Americans here because our country opened its arms to our ancestors. My ancestors were fleeing the pogroms in Eastern Europe. Donald Trump wouldn’t be here if our country hadn’t opened its arms to his ancestors. They’re not paying attention to the facts: There hasn’t been a single terrorist incident in America since 9/11 committed by a refugee. This misinformation, this political fearmongering to get your vote, to terrify you is as old as the hills. Education is the only thing that counteracts it.”

On Homeland, which returns for its sixth season on Showtime in September, Patinkin plays former CIA head Saul Berenson, and his experience continues to shape his worldview.

“Because of it, I’ve pretty much met everyone in the national security system — not only in this country but in other countries,” he said. “I’ve been briefed far more than I ever wanted to be, and I’ve heard more information than I ever needed to hear. And what I’ve learned is how extraordinary our security systems are in America. You must keep your defenses up to the highest degree imaginable — it’s essential for all of us all over the world. But along with that, we must keep our humanity as well. Because if we don’t keep our humanity, there will be nothing left to defend.”

While it would seem that Patinkin compartmentalizes his life — a singer of standards, an actor in high-tension drama, Inigo Montoya from The Princess Bride and a human rights advocate — he said that these are all threads from the same fabric. When he sings Yip Harburg’s lyrics to “Over the Rainbow,” he hears them differently these days.

“The opening words to that song are, ‘When all the world is a hopeless jumble, and the raindrops tumble all around, heaven opens a magic lane. When all the clouds darken up the skyway, there’s a rainbow highway to be found, leading from your window pane to a place behind the sun, just a step beyond the rain, somewhere over the rainbow, way up high, there’s a land that I’ve heard of once in a lullaby,’” he said as he recited lyrics to the Judy Garland classic. “That’s a song about Syrian refugees. That’s a song about your own family, your own children, your own life, your own troubles. The reason why these songs are classics and are timeless is because they reflect the human condition forever. They’re food for my soul.”

Print headline: Think serious, Mandy Patinkin sings songs of romance and escapism, but his priorities are based in reality.