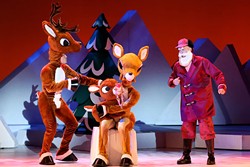 Recalling the most famous reindeer of all has never been a problem for Natalie MacDonald, the actress portraying the titular sleigh-guider in Rudolph the Red-Nosed Reindeer: The Musical. The stage production, scheduled for a Nov. 19 premiere at Civic Center Music Hall, 201 N. Walker Ave., is based on the 1964 holiday special, and MacDonald said her first viewing of the television tradition must predate her earliest memories.

“It would always come on,” MacDonald said. “I remember that I thought Rudolph was just the cutest little thing. I remember I liked him so much when I got a little older. When I was in junior high, they came out with stuffed animals of Rudolph and Clarice, and Rudolph’s nose actually lit up, and I got those stuffed animals — that’s how much I loved Rudolph all growing up. I just think he’s adorable.”

To prepare for her role as a claymation, cartoon, boy reindeer, MacDonald said she drew from her early memories of watching the special as a child and repeated studies of it as an adult. A dialogue coach helped her better recreate Rudolph’s voice as originally established by actress Billie Mae Richards, but MacDonald said one of the biggest challenges for embodying the character has been attempting to capture the mindset and body language of a male.

“Not only am I portraying a reindeer, which is a nonhuman character, and that’s really interesting by itself, playing an animal,” MacDonald said. “So there’s that, but then there’s also me playing a boy. It’s something that a couple of years ago, I would’ve never thought I would’ve done. … You really have to get in your body the way a boy would act, and it’s really different from a girl. Feminine and masculine qualities back 50 years ago, when Rudolph came out, were very exaggerated between the two. There was a clear, definite line between masculine and feminine qualities that was expressed on the camera and onstage and on TV.”

Writer Robert Penola, who adapted the script for the TV special to the stage, wrote in an email interview that he remembers watching Rudolph when it originally aired. For Penola, the difficulty in translating the special to the stage was more technical.

“The biggest challenge,” he wrote, “was, Do the reindeer walk on four legs, or two, if they are played by humans? We decided to bring the characters to life using human expressions, so we kept them on two feet.”

Gender and species differences aside, MacDonald said she identifies with Rudolph’s character for the same reason so many people have over the years.

“Everyone has some way that they consider themselves a misfit, where they don’t fit in,” she said. “For me, it’s many things. I’m just all sorts of odd in so many different ways. I was homeschooled all growing up, so that was a huge part of me feeling like an outsider. I wasn’t in school to hear all the inside jokes.”

Penola wrote that Rudolph is a timeless tale because it speaks to people who feel like outcasts.

“In many ways, the story is even more relevant today, with its focus on being bullied for the very thing that makes you different and special,” he wrote.

For MacDonald, Rudolph’s resiliency and ultimate redemption gives the story its power.

“It’s amazing that we are all different and we all have something to add to the table in our society, and I think that’s something beautiful that should be loved and respected, and I think that Rudolph’s whole story really portrays that,” she said. “He’s a perfect example of selfless love and respect toward people who maybe weren’t as nice to him when he was growing up, but he still stepped up and realized that he had a great asset to add to Santa’s team. … I love that Rudolph isn’t thinking about himself in that moment. He’s thinking about all the kids around the entire world who may not feel loved if they don’t get presents from Santa that year.”

“My grandma came to see the show last year, and she loved it just as much as my parents did and just as much as my niece and nephew did, because my mom used to watch Rudolph with her parents as a TV special each year growing up,” MacDonald said. “The entire family would get into the living room and watch the show together.”

Costumed actors and puppets — including a 14-foot tall abominable snowman operated by three people — bring the special to life in the stage production, and MacDonald, with the help of a wired harness, takes flight. Olympic gymnast Cathy Rigby, a co-producer of the show known for portraying Peter Pan onstage, helped MacDonald learn to fly and offered some useful advice for acting in children’s theater.

“She was just like, ‘Have fun,’” MacDonald said. “Even if you accidentally mess up on the wires, even if my antlers get tangled in the wires, ’cause that happens. She’s like, ‘If you’re out there drawing the audience in, that is the most import thing. That’s irreplaceable. When the audience feels like they are a part of our show … it’s like nothing else matters. … All the technical aspects go by the wayside, and we just want to tell our story and we want you to be a part of our story.’”

Rudolph The Red-Nosed Reindeer: The Musical