Brightmusic Chamber Ensemble’s first performance of the season focuses on an often-ignored instrument. 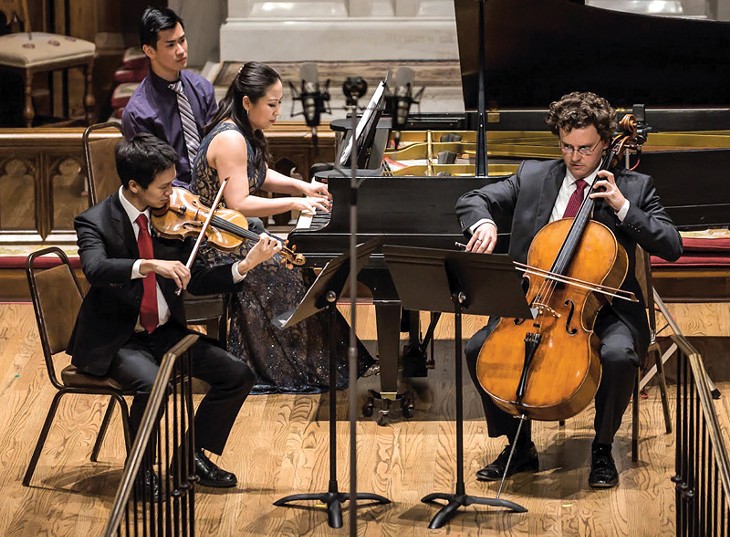 What’s the difference between a radio and a viola?

How do you know there’s violist at the door?

They can’t find the key and don’t know when to come in.

What’s the definition of “perfect pitch”?

Throwing a viola in the dumpster without hitting the rim.

“There are more viola jokes than for other instruments,” said Amy I-Lin Cheng, pianist and co-artistic director at Brightmusic Chamber Ensemble. “Oftentimes, the viola is overshadowed. Usually it’s the inner voice. The violin is the soloist, the cello is the bass, the piano usually gets a feature, but the viola isn’t usually a soloist.”

“He is really well-spoken and at the same time a wonderful, wonderful violist,” Cheng said.

On a recent “Minute With Miles” segment, Yale and Juilliard graduate Hoffman discussed his role as a violist in the rich tradition of classical music.

“I’m always aware that when I’m playing a concert, the quality of my performance is of great importance in bringing the music to life for the people who are in that particular audience,” Hoffman told listeners. “So yes, in the limited sphere of my performances and my audiences, my role is critical, and if I play Mozart well, or Brahms, or Beethoven, I’m playing at least a small part in sustaining a vital and beautiful tradition.”

Hoffman will join Mark Neumann, Brightmusic’s regular viola player and University of Oklahoma music professor, to perform three works heavily featuring the viola alongside the clarinet, the piano and the cello.

While the importance of the viola in classical music has been frequently downplayed, the string instrument has had some important champions throughout history.

“Mozart, he wrote six viola quintets,” Cheng said. “He was a violist himself. He was able to play multiple instruments, but he did like viola quite a bit. For him, the string quintet, the fact that the viola is the string instrument he chose to double, shows how fond he was of this instrument.”

“When Mozart added an extra viola, it added a richness, a texture.” — Amy I-Lin Cheng tweet this

The composer’s String Quintet in G Minor, K.516, for two violins, two violas, and a cello, will conclude the concert.

“A lot of times Mozart composed in a major key, but this one in G minor is somewhat dark,” Cheng said. “It’s extra dramatic. So this piece is in four movements starting with an elegant yet dark, fast movement. Then it goes on to a minuet, a dance. The third movement goes to a major key, and the closing movement starts in a slow, large-scale cello work and that builds to a fast closing movement to provide a form of relief. It’s a very satisfying piece to listen to.”

The two violas play an important role in the piece, written in 1787 by the Viennese composer.

“When Mozart added an extra viola, it added a richness, a texture,” Cheng said. “It’s warm. The register is lower than the violin, but not as low as the cello. It has almost a human vocal range, and that’s why it matches so well with clarinet. It enriches the inner voice in a quintet; it’s a really warm core.”

String Quintet in G Minor doesn’t feature a clarinet, but the two other pieces on the program will. Lowell Liebermann’s Trio for Clarinet, Viola and Piano, Op. 128 is a contemporary piece written in 2015. Born in 1961, Liebermann made his performing debut playing an original composition at Carnegie Hall at the age of 16. He currently teaches composition at the Mannes School of Music in New York City.

“The first movement has a serious and nocturne like quality,” Cheng said. “It’s melodic and dreamy. He alternates that with a jazzy style that also has special effects from the viola. His storytelling is quite wonderful. He contrasts these sections by juxtaposing these characters of dreamy and jazzy styles. Then he has a very slow and pensive second movement, where he dives into his fears. You hear more dissonant intervals, repetitive and consistent drive that brings us to a very exciting end.”

The program’s centerpiece will be a selection of five of Max Bruch’s Eight Pieces for Clarinet, Viola and Piano, written in 1909.

“Bruch is very tonal and very romantic,” Cheng said. “This whole cycle is known for their melodic writing and their rich harmony, the rich interwoven lines between all the musical colors and parts. Bruch composed this piece about 10 years before he passed, and it’s a very mature work.”

The German composer, who died in 1920, is largely remembered today for his virtuoso pieces written for the violin, which, although smaller in size, typically receives more attention than its bigger sibling the viola. The viola’s reputation for getting lost in the mix and the small number of solos it typically receives has caused some to unfairly label viola players as less talented than violinists and to consider the viola as less essential to an ensemble, but Cheng said Brightmusic intentionally selected the program for Voilà: Viola! to showcase the considerable range and depth the instrument has to offer those who listen closely.

“Our program is very diverse,” Cheng said, “and we encourage everyone to come with open ears.”