Rooted in pre-Prohibition vaudeville and late 19th-century can-can dancing, burlesque is well over 100 years old, and even though Adèle Wolf has only been performing for seven, she has already seen an evolution in the attitude of Oklahoma City audiences.

“When I first started, a lot of people had a bad idea about burlesque,” Wolf said. “They didn’t really know what to expect at my shows. It was really like pulling teeth to even get a venue … but at this point, about 50 percent of our audience is regulars, and many of them have been coming for many, many years. A lot of them plan their holidays around us.”

Watching YouTube videos about burlesque, Wolf became fascinated with the art form and started her own production company “out of necessity,” producing monthly shows for a year before deciding to concentrate on larger themed productions for Halloween, Valentine’s Day and New Year’s Eve and producing the annual Oklahoma City Burlesque Festival, which takes place in June.

“Coming from theater especially, where you’re playing someone else’s character, you’re saying someone else’s words, everything is someone else’s vision,” Wolf said. “For that reason, burlesque, where I’m choosing my music, I’m creating my choreography, I’m making my costume by hand, it makes it really fulfilling artistically. I get a lot of joy out of that.” 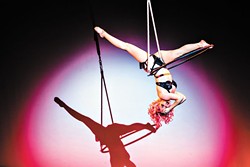 Though she originally discovered burlesque on the internet, Wolf has a deep appreciation for its past, something she tries to reflect in the content of her shows by paying tribute to its early stars.

“For New Year’s, we really try to acknowledge the history of burlesque and kind of celebrate that, so one of the acts I’ll be doing is a tribute to, actually, Natalie Wood’s portrayal as Gypsy Rose Lee from the first film adaptation of Gypsy, so that’s my old number that I’m bringing back with something new that I won’t say,” Wolf said, laughing.

“We’ve had a lot of different props in the show,” Wolf said. “We’ve had full-sized bathtubs, I’ve danced with my snake before, we have all sorts of fun stuff, but I think this is the first time we will have a traditional balloon dance … that’s like a very old-school, classic burlesque prop to dance with a giant balloon … Sally Rand-style.” 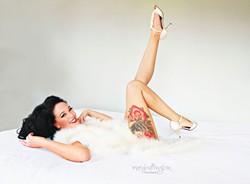 Wolf currently divides her time between OKC and Paris, France, and outside the shows she produces herself, Wolf said she performs more in Europe these days, where burlesque is received differently.

“People really don’t bat an eyelash at it,” Wolf said. “They just understand it’s a show. They have a completely different attitude towards nudity in relation to art, so it’s a lot more open. You also have an interesting dynamic of some Europeans not being interested in burlesque because nudity is so normalized that they’re like, ‘OK, well, why would I want to see this?’ … It’s a different attitude in Europe. People bring their children to Moulin Rouge; it’s totally normal.”

Uninitiated American audiences, on the other hand, are often not sure whether to expect a family-friendly act or something better suited to a strip club. The truth is somewhere between the two.

But at this point, Wolf said the audiences at her local productions know what’s in store and are notably supportive.

“We have performers come from literally around the world, and so many of them, they tell me that they’ve never performed for an audience like mine before, and that’s because Oklahomans are really warm, for one, I think,” Wolf said. “And Oklahomans are also very dedicated fans. Whether it’s sports or burlesque, if they are a fan, they are there. So still, my home audience is one of my very favorite in the world to perform for.”

Wolf credits the city with her success and said she’ll always consider it her home.

“I would not be able to have done the things I’ve done in another place. I love Oklahoma City,” she said. “I’m not ready to become a full-time European quite yet.”