If words like “bedazzling” and “sensuous” aren’t in your current lexicon, maybe it’s time to take a cue from Oklahoma City’s burlesque queen.

“OKC is finally comfortable with the idea of striptease,” Wolf told Oklahoma Gazette about the adult festival. “People love a good escape from the ordinary, and burlesque always takes you away from the norm.”

Wolf’s show features everything from old Hollywood screen siren aesthetics to a routine titled Sexy Cookie Monster. This is anything but commonplace.

Circus acts, acrobatics and improvised dialogue are just some of the many spectacles offered in the festival. Even animals make stage appearances in the show. 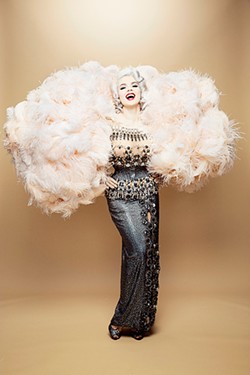 “The famous dog Mr. Cheese has been known to show up onstage with Ooops the Clown, so you never know what you’ll get in the festival,” Wolf said. “It’s so rewarding to watch the audience experience the unexpected.”

Wolf’s travels and tours have almost single-handedly brought the burlesque world to OKC.

“Our headliners this year represent some of the most relevant modern burlesque scenes in the world today,” she said. “There’s a direct correlation between where I’ve toured and where the applications are coming from. If I’ve toured Berlin, we get applications from Berlin, and the same goes for San Francisco, New Orleans and NYC.”

Each performer brings an enigmatic array of styles and aesthetics, which Wolf attributes to an increasingly globalized burlesque scene.

“It’s really interesting to see each region or country’s specific style because each city varies from the next,” Wolf said. “Burlesque reflects culture in the same way theater or art reflect their context.”

Other performers include male burlesque star Tito Bonito and NYC’s Poison Ivory. Beyond their many talents, Wolf also emphasizes diversity and inclusion in her festival.

“Not all burlesque is feminist, but mine is,” she said. “I make it a point to include different races, bodies, genders and sexualities in my show and on my staff.”

“Besides the striptease portion of most performances, it’s hard to define burlesque because it has evolved so much historically,” she said. “In its early inception in the 19th century, women had to perform under less-than-ideal situations. Now, in 2017, it’s such an empowering practice for women.”