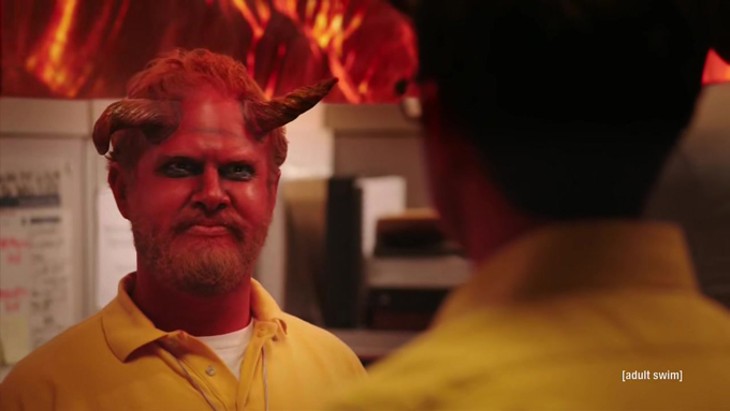 “Hell is for children.” — Pat Benatar

Those are all wrong, of course. Hell is where your pretty face is going in the recently released first season of Adult Swim show Your Pretty Face Is Going to Hell.

The live-action comedy follows an associate demon named Gary (Henry Zebrowski, Wolf of Wall Street) who works an office job in hell. It’s pretty terrible, as you might imagine. His boss is Satan (Matt Servitto, Banshee), every day is Monday and the break room is just a tiny door leading to a thousand spinning blades.

Plus, everybody has to wear yellow polo shirts. It’s not a good look.

The DVD has all six first-season episodes on one disc with plenty of outtakes, deleted scenes and commentary for each one. But it would be worth it for the show alone, which combines smart writing with passable CGI reminiscent of 2007’s Adult Swim series Saul of the Mole Men.

Gary is a sympathetic character, especially when it’s clear how quickly his intern Claude will climb past him up (down?) Hell’s corporate ladder. But he’s also pretty stupid, and Your Pretty Face makes it easy to laugh at his fairly upbeat attitude toward the worst job anyone could have.

The show is filled with beautiful little touches that make office life hellish for those on earth and elevates the concepts to new depths — key cards that beep but only occasionally open doors, archaic operating systems designed to make everyone work harder, meetings that last forever.

The special effects are a bit cheesy, but if that’s the sort of thing that bothers you, this probably isn’t your show anyway.

Adult Swim is forever mining new chunks of gold out of anti-comedy. There are plenty of moments of shock and discomfort, but Your Pretty Face stays true to its logic. Of course Hell would be a terrible place for everyone. Of course working in a cubicle for eternity would be the worst possible version of the afterlife.

In the first episode, while flaying a soot-covered Eddie Pepitone, Gary quickly runs out of breath and says, “I don’t know who’s being tortured more here, you or me.”

While he’ll go through several more indignities as the episodes progress — shoveling an endless mountain of coal, preserving the condo where Satan has sex with his ex-girlfriend and losing his summoning word — the torture is definitely reserved for those on-screen. Anybody watching will have a hell of a good time.

Sorry about that pun. Consider it your punishment for not watching this show already.

Print headline: Damned funny, Adult Swim released the first season of Your Pretty Face Is Going to Hell, and trust us; everyone can relate to this live-action comedy show.