oNE OKC returns as northeast OKC’s premier community event highlighting the vibrant, economically and culturally rich vision of its future. 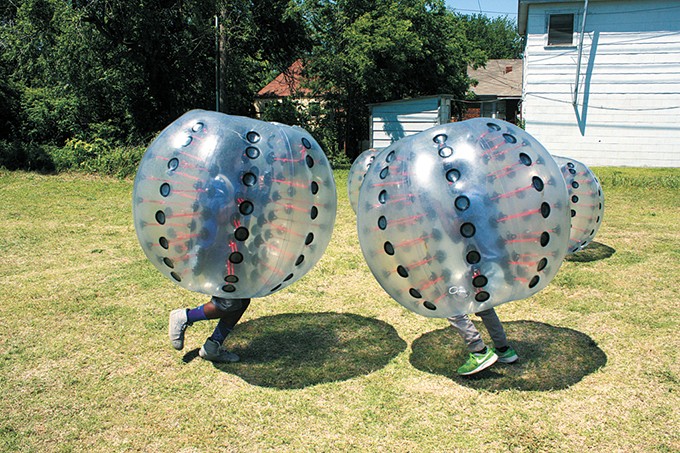 Exactly one year ago, several thousands of people gathered for the second annual oNE OKC: A Northeast Renaissance block party along a closed stretch of NE 23rd Street near N. Rhode Island Avenue. There, inside a large white tent called the Building Tomorrow tent, a local development team displayed its renderings for rehabbing a shuttered auto shop. When the crowd members asked where this new development would be, developers pointed across the street.

On May 19, when Northeast OKC Renaissance Inc. brings oNE OKC back to NE 23rd Street, the crowd will see the finished product, a $4.3 million investment resulting in OKC Community Clinic, which is the first development project along NE 23rd Street in 38 years. The clinic opens its doors for tours and free health screenings during oNE OKC, which will again feature the Building Tomorrow tent and showcase the developments and revitalization efforts that will follow.

“We are building a street festival that connects the community to the great opportunities happening in northeast Oklahoma City,” said Quintin Hughes, a Northeast OKC Renaissance Inc. board member and creator of oNE OKC. “But it is also for the broader metro community to really see and be a part of the changing narrative of northeast Oklahoma City. What people might essentially think of when you say NE 23rd Street, typically there is a negative connotation. We really want to be part of changing the story. I view the event … as a catalyst.”

In many ways, oNE OKC is a traditional community street festival with live music, children’s activities, vendors and food trucks. Its design is based on the successful downtown and district street festivals like H&8th Night Market and the Paseo Arts Festival. oNE OKC is also on a unique mission to “showcase the vibrancy of northeast Oklahoma City and the economic development in the community,” said Marissa Alberty, who serves as co-chair of this year’s event.

Indeed, northeast Oklahoma City is experiencing a revival that it hasn’t seen in decades. The minority-majority community, which has traditionally been challenged in economic development, received a boost back in 2015 when the Oklahoma City Council approved the development of a tax increment finance (TIF) district to support the Northeast Renaissance Urban Renewal Plan. Championed by Ward 7 Councilman John Pettis, the plan was designed to benefit the blighted NE 23rd Street corridor between Interstate 235 and the Oklahoma River and spur development along and near NE 36th Street.

Improvements to the Northeast Town Center shopping center, which attracted a Save-A-Lot grocery store and a Dollar Tree, along with the two-phase multi-million dollar development project that will result in OKC Community Clinic as well as restaurants, retail and creative work spaces, are the early results of the TIF district.

oNE OKC is a tool to keep neighbors updated on the redevelopment progress, share what’s to come and celebrate the northeast Oklahoma City community.

The idea for oNE OKC came years ago when Hughes learned about an organization in Birmingham, Alabama, attempting to bring attention to previously economically depressed areas through block parties. Prior to the parties, the organization helped new businesses and entrepreneurs operate temporarily from those areas, offering the business owners and nearby residents a glimpse of what revitalization looked like.

“I pondered, ‘Could we pull something like that here?’” Hughes said. “I was afforded that opportunity when I was asked to become a member of the Northeast Renaissance Steering Committee.”

In 2016, through a partnership between the Northeast Renaissance Steering Committee and Leadership Oklahoma City’s LOYAL Class XI, oNE OKC debuted as an outdoor event on the campus of Douglas Mid-High School.

Alberty was one of the participants in the 2016 crowd. The chief of staff for Teach for America – Oklahoma City arrived motivated to learn more about the community and find ways to get involved. In 2017, Alberty joined oNE OKC’s programming committee and oversaw the Building Tomorrow tent.

“I feel very passionate about helping to make the community better because I believe when communities are thriving, schools will thrive as well,” Alberty said. “For me, it is an indirect way to impact education and the work that I do.”

Both Alberty and Hughes said the volunteers behind oNE OKC are passionate individuals invested in the northeast Oklahoma City community. They already see interest from the community’s next generation, as young adults in college and high school are getting involved.

As northeast Oklahoma City continues its journey of revitalization, Hughes said oNE OKC will proceed as the event to highlight and celebrate the community’s triumph.

“I expect for it to be a staple event,” Hughes said. “I expect its success to coincide with the successful transformation of northeast Oklahoma City.”