Paramore demonstrates a newfound maturity at its Zoo Amphitheatre show. 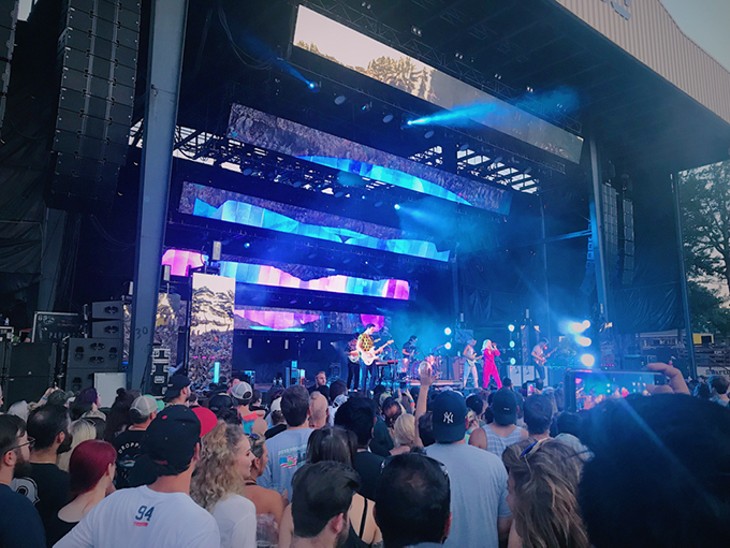 A 90-degree evening didn’t stop music fans from filling The Zoo Amphitheatre for Paramore’s After Laughter Summer Tour, nor did it diminish the spirits of the energetic musicians onstage.

In fact, right at the start of the opening set, a perfect cloud blocked the blazing sun and lowered the temperature at least ten degrees. Sure, it dissipated eventually, but it was an auspicious start to a fun evening of music.

California musician Jay Som (the stage name of performer Melina Duterte) began the night with her easy indie pop. Her songs have a dreamy and lo-fi quality, almost jazzy in some of their instrumentation, and she endeared herself to the audience with her laid-back, smiling banter and lighthearted set.

By then, the crowd was primed for headliner Paramore to take over. Crewmembers revealed hanging silver screens that glinted in the sun and reflected the blobby shapes of eager audience members. Shortly after, the group practically exploded onto the stage with “Grudges,” beginning their two-hour set with a bang.

Singer Hayley Williams popped in wearing a loosely tailored hot pink suit and danced with abandon, moving like a dynamo even in the summer heat. The screens flashed bright colors and shapes during “Rose-Colored Boy” as the audience joined in her campy cheer, “Low-key, no pressure; just hang with me and my weather!”

After a solid hour of pop rock, the group slowed things down for a surprisingly touching acoustic set, sitting along the edge of the stage with guitars and a drum machine.

Before launching into the emotionally raw “26,” Williams expressed pride for the band's 2017 album After Laughter, hinting at the long, rocky path to its completion. After Laughter is a follow-up to 2013’s Paramore, which was recorded after co-founding members Josh and Zac Farro left the band. Zac Farro has since rejoined as drummer and was onstage with Williams.

“Now that we’re on this side of it — not to say there won’t be other hard times,” Williams said, “but I feel very thankful. It was all worth it to go through.”

Indeed, Paramore has done some shuffling and evolving in the last few years. In the mid-2000s, the young band began with a grungier pop-punk sound. Now it has matured slightly, and the newer songs from After Laughter have a synth-pop sensibility that feel more polished, a bit ’80s and refreshingly unconventional.

Consider “Told You So.” It’s a fast and groovy jam with tumbling guitar riffs and a hint of tropical marimba. The crowd at the amphitheater embraced this new sound, dancing and singing along as much as ever.

The band acknowledges and appreciates this loyalty. During “Misery Business,” Williams invited three audience members onstage to sing with her. She showed one fan how to power pose atop a monitor speaker while another rocked out on a cowbell. It was an exuberant moment and a delight to witness.

Before the band's last song, Williams applauded the diversity in the crowd and encouraged fans to continue reaching out to others through music. They closed with “Hard Times,” a bouncy tune that recognizes hardship but laughs in its face.
It’s an attitude that seems to be working quite well for Paramore.