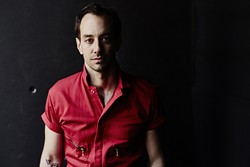 Albert Hammond Jr., the three-piece-suit-wearing guitarist for The Strokes, returns to Oklahoma for a solo performance Wednesday, Oct. 7, at Opolis, 113 N. Crawford Ave., in Norman.

Having been to Oklahoma before, a decade earlier with The Strokes, Hammond admits that it feels like a “different lifetime ago.”

“It’s pretty fun to be going on the road this time and not only be playing all those new songs, which is exciting, but to have a set list that feels very new and shows fans a new direction,” Hammond said.

Hammond is currently playing eight of his new songs and mixing in older tracks off of his first two albums, Yours to Keep and ¿Cómo Te Llama?

Gus Oberg, Hammond’s longtime friend and collaborator, produced Momentary Masters. The title is from the book Pale Blue Dot: A Vision of the Human Future in Space by astronomer Carl Sagan. The book is an exploration of the universe and the human race’s place in it. The phrase stuck with Hammond, who thought it at first was a bit egotistical and funny. However, Hammond feels that it is a truism that accompanies every endeavor; every triumph is fleeting. Every time one finds complete happiness, there is also a new low that inevitably follows it, Hammond said.

The formation of the new lineup of Hammond’s band helped ignite the creation of Momentary Masters. Although the writing process wasn’t easy, it came naturally.

“You’re always thinking of stuff. It’s not always sitting and writing; it’s practicing, and you start working on stuff. You’re just dabbling for days, you hate the instrument and sometimes something comes,” he said. “There’s no set way [to write songs]. It just comes from little moments of excitement that kind of push you through to different places.”

Those moments of excitement radiate from each of the 10 tracks on Momentary Masters, which bounces along with call-and-response guitars and vocal hooks carried by a rhythm section that enables the songs to breathe effortlessly. The songs sound complex in their simplicity. Even the high-hat work sounds as though it was created in a laboratory, and there are mountains of information buried in each track that makes it something you can listen to indefinitely. Nothing short of a momentary triumph, the album title is fitting, as the songs play like shards of mirrors reflecting light in a black vacuum or possibly planets bathed in starlight seen through a telescope light-years away.

Opolis is one of Hammond’s mid-tour stops during a 28-city U.S. trek. Hammond heads overseas to begin his European tour in November.

The show starts at 9 p.m. Doors open at 8 p.m., and tickets are available at opolis.org.