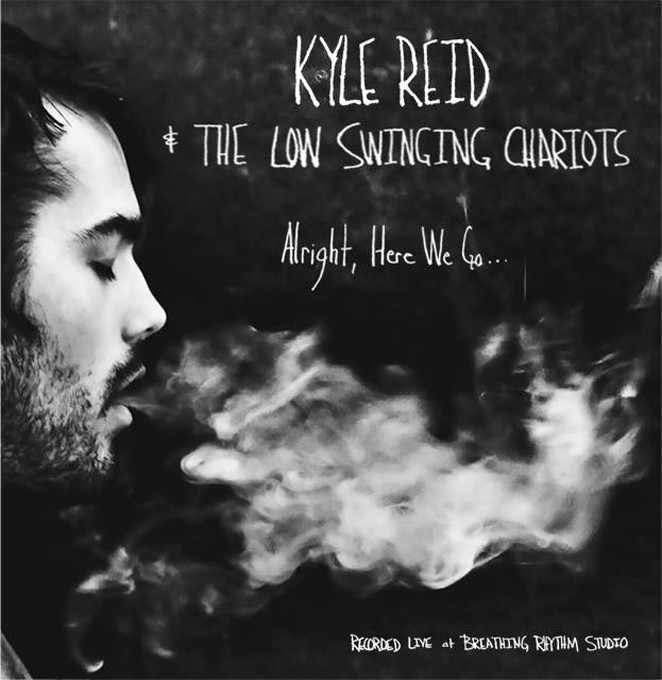 Why so serious? It’s a question posed by The Joker to Batman, but it’s one worth asking many artists of Kyle Reid’s ilk — devotees to music of a bygone era of American music more concerned with picking the note than capturing the spirit behind it.

Fifties-era rock ’n’ roll, New Orleans brass bands, swing and saucy blues — it was the rebellion of yesteryear. But most of those tasked with reviving that sound (or at least preventing it from dying out entirely) act as princely saints, playing the devil’s music like there was never a lick of evil to it at all.

Music isn’t a chore; it’s a celebration of life, its joys and sorrows alike.

Norman’s Reid — unlike so many before him — knows this well. He doesn’t play like a man possessed by the sepia-hued vision of a wholesome, milder-than-reality past. He plays like a man who recognizes what a good time was, is and always will be — that having a heck of a lot of fun never goes out of style.

With his sleeves rolled up, elbows greased, guitar cocked and devious grin beaming, Reid breezes through Alright, Here We Go... like a country boy taking the city by storm. Willfully blue collar and relaxed but sophisticated and skillful, it’s a knowing record and a slinky set of songs capable of charming the knickerbockers right off about anyone.

“Shot of Whiskey” is the first entry and makes that Happy Days narrative of rebellion known from line one, opining a love lost with a “shot of whiskey” and “a little toke of reefer” with a quick, playful and zippy melody worthy of a Pixar short. The guitar rips and horns blare into these fiendish little dirt devils that play fast and loose in The Big Easy.

Reid’s deep, smoky vocals and upright bassist Johnny Carlton’s vital low-end grooves work as the perfect foil to the blazing horn section and cheerful string arrangements in the more swinging moments like “When I Was Young” and “I Lean.” The former is as soul-satisfying as a gospel brunch punctuated with an excellent outro, where “I Lean” would have done Benny Goodman, the King of Swing himself, proud in its fierce devotion to the Big Band era and inextricably sincere execution thereof.

Most impressive is Reid’s transition into the smaller, softer moments — the ones that threaten to drift toward sleepy if not handled correctly.

The ember glow of “Pride and Swing” and “Dancing,” Reid’s midnight serenade to stray dogs and alleycats, are imposing for such quiet ditties, soliciting the same attention songs twice as fast and orchestrated do.

Alright, Here We Go... is sometimes as noncommittal as its title, more of an open invitation than demanding of your presence (the closing pair “Minor Iko” and “A-Minor Affair” wander a little too far at the end). But that’s as much an attribute as hindrance. Legs kicked up, playing love songs on a dimly lit porch to an audience of one or none at all beneath a piercing moon and distant stars, Reid and his Low Swingin’ Chariots capture as true a look into the American past as any band out there without trying half as a hard.