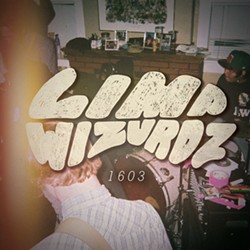 A little, at least. Well, as much as can be expected from snot-nosed Norman punks whose name is a shit-eating grin of a tribute to one of America’s worst bands (Limp Bizkit) and spewed out stream-of-consciousness diatribes like “Master Newscaster” and “Robotic Cock” on an EP named for Gary England with cutouts of Harry Potter and I Can’t Believe It’s Not Butter packaging on its cover.

These are the same guys, sure, and 1603 isn’t exactly the music for buttoned-up, past-their-prime accountants, but maybe age is sharpening their red-eyed vision. The rowdy outfit’s first full-length effort is less kids getting their cheap-ass thrills from dumb (albeit always entertaining) stunts and more reluctant adults accepting the realities of the world, but more than prepared to ingest anything and everything that will help them forget about all that for an afternoon.

The production quality (courtesy of Wasted Space Studio), namely, is a marked improvement, and like a swipe of deodorant and fresh pair of underwear, rehashed tracks like “Ronald,” “Asian Girls Everywhere and “SALMON” (among others) from prior EPs sound, smell and look better than ever. Lo-fi self-recording isn’t necessarily a bad look — and is usually an inescapable one for punk bands without a trust fund payout burning in their back pockets — but the mix does wonders in conveying the unruly sound without scrambling it.

There’s more to 1603 than a new coat of (probably huffed) paint, though, and it truly bears some watershed songwriting moments for the band — both in terms of hooks and emotional punch — that previously seemed impossible.

This isn’t high art — nor will it ever be — but “Cankicker” is a dazzling tempest of sugary pop-punk hooks and high-wire energy that bursts into a Red Bull sun shower. It’s devastatingly catchy and as lyrically astute (even heart-wrenching) as any song in the past year out of 2014’s biggest emo revival luminaries: Joyce Manor, Into It. Over It. and Title Fight.

The album has something of a short attention span, dipping in and out of one-minute thrash tantrums that belie the more sophisticated songwriting found throughout. But that’s but one small growing pain of maturing from pot-addled adolescents to punk rock revisionists, and Limp Wizurdz threatens to be a force to be reckoned with in songs like “Ronald,” “Numbers” and “18.” These are heights that previously seemed impossible, and Limp Wizurdz are not only doing it but also making it look easy.

Perhaps this was in them all along. As they close out 1603 with “We Here Are Suffering” — swimming in cutaway audio samples and art noise dissonance — frontman Taylor Young and crew have aged what feels like 13 years in as many songs retaining the best aspects of their youth and ditching the rest.