Album review: The Flaming Lips – With a Little Help from My Fwends 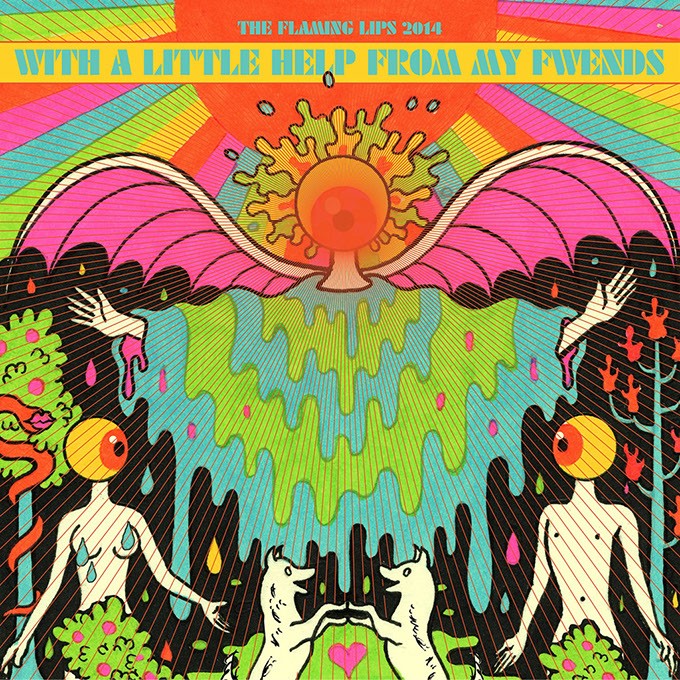 There’s a scene in Walk Hard: The Dewey Cox Story (the music biopic parody starring John C. Reilly, written by Judd Apatow) when the titular character — given a new creative direction by, fittingly enough, a fictionalized Beatles — is working on his LSD-driven masterpiece in a massive studio replete with a full orchestra, aboriginal percussionists, an army of didgeridoos and a live goat. It’s a spoof of that Brian Wilson, do-whatever-it-takes-to-make-it-perfect studio experience that threatens the sanity of everyone evolved.

But most creativity does demand insanity, and over the past decade, The Flaming Lips have operated almost exclusively in this way. Grittier, yes, and the destination is reversed: Oklahoma’s freakiest native sons find their brand of perfection in pushing that fanatic process into the most absurd and ridiculous corners it can possibly go.

And what better avenue used to plow headfirst into the loony bin than to scale what is, perhaps, the most staggering entry into The Beatles’ legendary back catalog, the revelatory Sgt. Pepper’s Lonely Hearts Club Band?

You don’t reinvent perfection. You can’t. You won’t. A safe remake is wholly unnecessary, and for that reason, The Flaming Lips might be the only breathing group capable of covering such a significant album in its entirety and have it carry any value at all (as they have already done with Pink Floyd, King Crimson and The Stone Roses). They leave the technical and artistic merits alone — unfettered by them, even — and sacrifice the shell for the spirit. At its core, Sgt. Pepper’s was as fun and playful as it was high-brow.

With A Little Help from My Fwends is an album that serves diehard Flaming Lips fans more than The Beatles’, though, and is probably a mixed bag even for the Venn diagram overlap. Divisive in both construction and results, it plays out like a circus set in flames: colorful, violent, engrossing, repulsive and, most of all, surreal.

Because only in the Lipsverse would a Fwendly cast that includes Miley Cyrus, Tegan & Sara, Maynard James Keenan, Moby, Dr. Dog and more (including Oklahoma-tied acts Stardeath & White Dwarfs and Birdflower) make a lick of sense.

The pairings themselves speak to the album’s highs and lows. Cyrus is transformative in her appearances, which also happen to be highlights: “Lucy in the Sky with Diamonds” has heavenly pockets — an especially angelic but engrossing verse by the Billy Ray offspring — but is more determined to thrust itself violently into the bowels of hell, especially in the earth-shattering, electrified choruses. It’s the good kind of transformative.

Foxygen and MGMT’s Ben Goldwasser play along great as Wayne Coyne & Co.’s little bros in the “(Reprise),” and Dr. Dog, Chuck Inglish and Morgan Delt find a way to coexist in the sunny “Getting Better.” Yet the brightest offering might be the harmonious marriage of Phantogram, Julianna Barwick and Spaceface in the gentle piano ballad “She’s Leaving Home.”

But as stretched-out and overpopulated as the tribute was designed to be, there are ill-fitting jaunts in the more-dated-than-the-original “Lovely Rita” and “Being for the Benefit of Mr. Kite!” As caustic as the formula is, it’s a mostly loose and palatable affair. Leave it to The Flaming Lips to pull off such an insurmountable proposition and make it feel like it was done on a whim.