Alcohol reform is still underway at the state Capitol 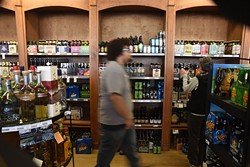 The most substantial overhaul of Oklahoma’s liquor system since Prohibition was approved by state voters in November, clearing the way for grocery and convenience stores to sell wine and refrigerated full-strength beer beginning in October 2018.

Additionally, retail liquor stores can open their shops from 10 a.m. to midnight Monday-Saturday and sell a small selection of items other than alcohol, like mixers, fruits and glassware.

While proponents preached the need for Oklahoma to modernize alcohol laws, opponents — including many liquor stores — argued the reform benefitted big box stores over liquor stores, hurting the local economy and small business. In December, the Retail Liquor Association of Oklahoma filed a court challenge to SQ 792, arguing the law is unconstitutional under the 14th Amendment of the U.S. Constitution, which guarantees equal protection under the law.

In an effort to address additional issues surrounding state alcohol laws, as well as give liquor, grocery and convenience stores time to make business changes, a two-year delay was crafted into the legislation. As several lawmakers predicted, at the conclusion of the January’s bill-filing deadline — the last day for state lawmakers to submit legislation for 2017 — there were a dozen alcohol-related bills.

Wright’s bill calls for eliminating sales tax on alcohol purchases and increasing the excise tax. As State Question 792 moves to end sales of low-point beer, Wright proposes simplifying the state’s alcohol taxation structure. Despite clearing the House Committee with no dissent, HB 1686 has been met with opposition from the Retail Liquor Association of Oklahoma and pro-alcohol law reform industry group Modernize Oklahoma. Opponents see the proposal as a massive tax hike, effectively raising the prices of alcoholic beverages.

Bice, who crafted much of the legislation to overhaul Oklahoma’s alcohol laws in 2016, authored Senate Bill 211, which calls for a county-option vote on Sunday liquor store sales.

The proposal was originally included in the original SB 383 language but was pulled to ensure a smoother passage through the committee process.

In late February, the Senate Business, Commerce and Tourism committee approved the bill, sending it to the full Senate for consideration.

If approved by both House and the Senate and signed by the governor, SB 211 would allow county residents to petition county commissioners to call a special election to vote on whether or not to approve Sunday alcohol sales.

The petition must contain signatures of at least 15 percent of the total votes cast in the last general election for governor. If a majority of county residents approve the measure, liquor stores have the option to open for sales between the hours of noon and midnight on Sundays.

Print headline: Carry on, Oklahoma’s alcohol reform is still a work in progress at the state Capitol.

Here is a list of alcohol-related bills still alive following the deadline for House and Senate measures to pass the committee process.

>> Senate Bill 58: Authored by Sen. Stephanie Bice, the measure would lower the alcohol consumption tax to 10 percent from 13.5 percent.

Current law: The state collects a special sales tax, known as the alcohol consumption tax, of 13.5 percent on sales of all mixed drinks, wine and some beer consumed at restaurants and bars.

Argument: The state’s tax is higher than other states. If not lowered, then consumers might stay home to enjoy alcohol.

>> Senate Bill 174: Authored by Sen. Stephanie Bice, the measure would allow married couples to own multiple liquor stores. Each spouse could apply and receive a retail spirit license for up to two liquor stores.

Argument: With passage of SQ 792 and SB 383, corporations that only sell beer and wine can apply for multiple licenses. The proposal would allow a married couple to have up to four retail spirit liquor licenses.

>> Senate Bill 211: Authored by Sen. Stephanie Bice, the measure would allow counties the opportunity to vote on whether liquor stores could be open between noon and midnight on Sundays, beginning in 2018.

Current law: Liquor stores are allowed to be open from 10 a.m. to 9 p.m. Monday-Saturday, but under new alcohol laws, stores may operate until midnight. Sales of packaged liquor are illegal on Sundays.

Argument: Wright, author of the bill, is pushing the measure to simplify the state’s tax structure. Distributors and producers of beer and liquor see the measure as a massive tax hike that would result in increased prices for consumers.