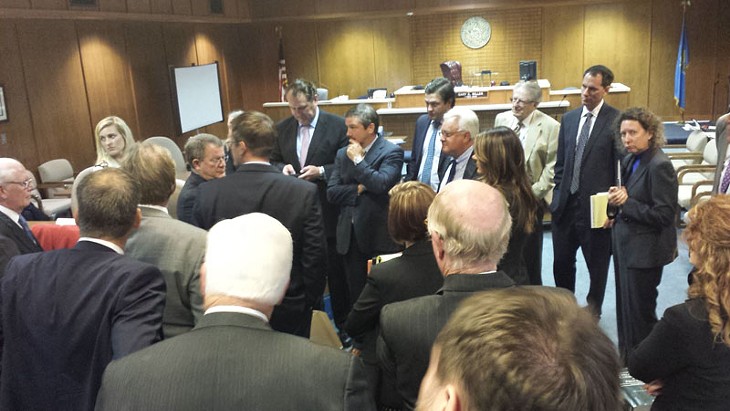 A disagreement over how restaurants are required to advertise and charge the state’s mixed drink tax for alcoholic beverages landed in a Canadian County courtroom last week as hundreds of restaurants were named as defendants in a lawsuit.

With over 30 lawyers present, the hearing proceeded slowly and was eventually postponed to give the defense more time to review evidence.

John Truel, along with several other individuals, filed the lawsuit three years ago, claiming many restaurants were not including the 13.5 percent alcohol tax in the originally listed price, as required by state law.

“Some [restaurants] would charge you for the drink and then add the tax to it, [and] others would add the liquor tax to it [on the menu price], which means some people are paying a different price at different establishments,” Truel said from the witness stand in Judge Gary Miller’s courtroom in El Reno.

Calling it a personal research project, Truel said he had visited over 1,600 establishments across the state to determine which restaurants were not including the 13.5 percent alcoholic beverage tax on the listed menu price, which he claimed is required by state law.

Title 37 (subsection 576) requires establishments to include the tax in the “advertised price.”

Several lawyers for the defense said the argument was over the definition of “advertised price” and that the Oklahoma Tax Commission (OTC), rather than the court, was the appropriate agency to determine the matter.

“This is not a typical case,” said Jim Larimore, an attorney representing various establishments, including Mama Roja Mexican Kitchen, Upper Crust and Louie's Grill & Bar. “This is a case like none other that I have ever seen.”

Paula Ross, a spokesperson for OTC, said the agency does not concern itself with the advertised price when performing audits or collecting taxes from restaurants.

Ross also said an official with the tax commission was scheduled to testify at last week’s hearing as a witness for the defense. In his statements to the judge, Larimore, a spokesperson for the other defense attorneys, indicated that he was not aware of an OTC official being available to testify, which could have been an example of the confusion caused by such a crowded courtroom.

Oklahoma’s Alcoholic Beverage Laws Enforcement (ABLE) Commission, which is the enforcement agency for the state’s alcohol laws, is also not involved in the listing of the tax.

“Our agency does not have position on it, as it seems to be a tax issue,” said Brent Fairchild with ABLE. “The ABLE Commission does not enforce taxation [laws].”

Adding to the complexity of the case is the fact that hundreds of restaurants — and dozens of lawyers representing them — are involved in the lawsuit.

Throughout the hearing on July 23, the testimony of Truel was stopped several times as various lawyers raised concerns with evidence. Judge Miller appeared visibly frustrated by the delays and sarcastically joked a few times about the large number of attorneys in his courtroom.

The first submission of evidence by the plaintiff was copies of over 90 menus from restaurants and bars across the state, which ignited a lengthy debate over whether the menus were admissible as evidence. Lawyers for the defendants claimed they had not been given enough time to look over evidence.

Miller postponed the hearing and asked the defense to discuss how much time they needed.

After Miller left the courtroom, dozens of the defense lawyers circled in the aisle of the courtroom and discussed the case. When one lawyer noticed a member of the media was still present, he asked Oklahoma Gazette reporter Ben Felder to leave. He refused, and an attorney consulted with the judge in an attempt to remove the media. The lawyer returned and said the judge recommended lawyers leave the courtroom if they wanted to keep their conversation private.

Miller returned to the courtroom several minutes later to see if an agreement between the parties had been reached. When no agreement was reported, he said he was removing the matter from any trial schedule at this time.