Ben Childers was originally surprised by how many bands inquire about the possibility of playing a gig at Anthem Brewing Company’s taproom, but perhaps he underestimated the appeal of playing a show inside a brewery.

Nearly anyone over a certain age can play a bar, but how often do musicians get the chance to perform in front of large distillery tanks in a warehouse where beer is actually made? As Anthem taproom manager Childers soon found out, multiple bands across the country are determined to visit as many as possible.

For two and a half years, the local brewer has been hosting its Anthem Live Music Series twice a week inside its cavernous warehouse taproom, 908 SW Fourth St. Shows are primarily held on Fridays and Saturdays, but sometimes branch out to other days of the week.

Childers said he never has to approach bands and artists about playing Anthem — they always come to him. There is currently a long-standing list of performers waiting their turn for a gig.

“This place, it’s fun,” Childers said. “[Bands] say, ‘You guys have a good time, your crowd’s cool and we just like playing there.’ It’s relaxed — no pressure, no anything. Just come on in, set up your stuff and play.”

The taproom setting is certainly unique from what most artists get the chance to play. Anthem’s taproom has high roofs and is packed at one end with brewing machinery. Artists new to the space sometimes have to tinker with their setup and technique to get the acoustics just right.

“It’s actually really good if you get in the right spot,” Childers said. “But you have to kind of know what you’re doing.”

The Anthem Live Music Series is not limited to Oklahoma bands or any particular kind of genre, though Childers said the large majority of its performers are locally based singer-songwriters. The next planned show is scheduled for March 23, featuring red dirt and Americana singer-songwriters Kent Fauss and Amanda Cunningham.

Still, Anthem has hosted everything from classical cellists to full-fledged rock bands in the past.

“We’ll try anything to see what happens with it,” he said. 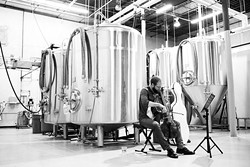 Anthem’s taproom started out as a 3.2 bar before craft brewers were legally allowed to sell full-strength alcohol. Even then, Childers said they would get several requests from bands wanting to play there. One of the first bands to ask about their availability was Austin, Texas, folk band Tennessee Stiffs.

“I was like, ‘Alright, but we haven’t really done anything like this yet,’” Childers said. “I didn’t really have any equipment; I didn’t have anything.’”

The band showed up for a special Sunday show — special because Anthem wasn’t even open on Sundays yet. Still, people came. Childers said it was a big success. As they began booking more and more one-off shows, crowd and band interest kept growing.

“It just kept building and eventually we went full strength and started seeing good crowds and started getting approached more by local artists,” he said.

Anthem became a full-strength taproom in August 2016. With the ability to sell higher point beer, the brewery was looking for ways to make a big splash vand draw in large crowds. Making their frequent musical performances into an official series seemed to fit that bill.

“We got a new website that tied it all in together where I just decided to name it this and see where it went,” Childers said.

Since that time, the Live Music Series has hosted many successful shows. Childers said a crowd of regulars has even started to gather for the shows.

“I think it’s been great,” he said. “It goes really well, depending on the artist or how well they’re known and how much they promote on their end, we’ll end up with some pretty good crowds.” 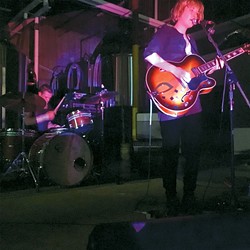 Which of Anthem’s tap beers is the best to pair with its music series? Childers recommends their pilsner, OK Pils.

“It just works with live music,” he said. “It’s a sessionable beer. You’re going to drink a long time and you need something you can drink several of. Our Oklahoma Pils is top-notch when it comes to that. I really like it; it’s a great beer.”

Beer might be Childers’ calling now, but throughout his 20s and into his early 30s he was deeply involved in the local metal scene as a roadie and tour manager for bands like Horse Called War and Earthship One. On occasion he still gets nostalgic for life on the road.

“There’s nothing like being on a van on the road with five dudes,” he said. “That stuff’s fun, but I don’t know that any of us can still do it. You get worn out and you start feeling old real quick sitting on a bench seat in a van.”

Early on in his band life, Childers said he was not that heavily into beer. But after he graduated college and began to get older, he started growing a refined taste for the beverage. Before heading out on tours, he would do research to find out if any cities they were visiting had a good local brewery.

Few ever did, he said. Brewing culture was nowhere near as prevalent in the ’90s and it is today.

“There wasn’t a whole lot in this part of the country in that timeframe,” he said. “We played regionally, so it was every state that connected to Oklahoma. Really, the only place that was really brewing anything was up in Kansas City.”

Now retired from life on the road, Childers is happy to share his new passion for craft beer with the people of OKC. The chance to being his two loves together in the same place is an added bonus.

“I needed somewhere to put my energy after I was finished with music,” he said, “and this became it.”