Music and alcohol have been nearly inseparable since the repeal of Prohibition, and even far before then. Concerts and bars are both social places where the goal, most often, is merriment alongside friends and loved ones. There is a reason live-music shows most often occur at places where alcohol is served.

Fans, of course, drink to have a good time during the show. But the artists on stage are often indulging as well. Sure, it helps them keep loose during the performance, but are there other reasons musicians might choose to have another round?

Oklahoma Gazette recently caught up with four local musicians to find out what their favorite drinks are and how the worlds of music and booze coexist.

In his earlier musician days, David Goad would begin drinking during his band’s load-in and keep indulging throughout the night. It was fun at the time but he eventually found that his singing was not as sharp and his stage performance was a little sloppier during his inebriated state.

Now he usually waits until a performance is over to take his first sip.

“I eventually learned to cope with the headaches and anxieties associated with performance,” Goad said. “I learned to run on adrenaline and room-temperature water.”

Goad is vocalist and lead songwriter for the aesthetically dark post-punk eight-piece band Kali Ra. He is also known for his work in past bands like Of the Tower. Goad’s go-to drinks are neatly prepared Irish whiskey or absinthe, prepared in the provincial way.

The musician enjoys drinking with meals, at parties and at the art receptions he visits but tries not to overindulge, both as a health consideration and for the mere fact that being plastered no long appeals to him.

Goad said the most popular forms of music today are often associated with drinking or bar culture because that is where they originated. The more traditional types of music often come from formal concert halls and churches, which might be why they don’t carry the association as heavily.

Though Kali Ra plays in fewer bars than it used to, Goad is happy to see music and alcohol coexist in a healthy and safe way.

“Both are great separate, but best together,” he said. “Listen responsibly.” 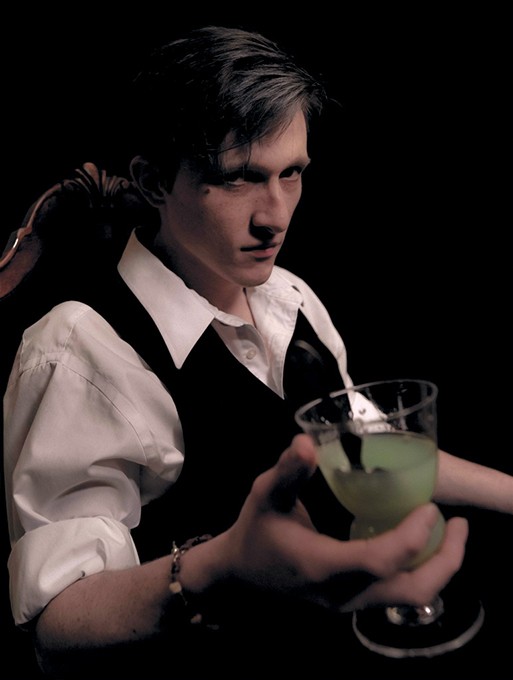 Jessica Tate used to run a bar, so she knows her way around liquor and has informed taste.

“I love Maker’s Mark, neat,” Tate said. “If I’m feeling fancy, I’ll have a Manhattan or a Boulevardier made with a good bourbon.”

Tate is a jazz harpist with a long history of playing live music in and around Oklahoma City. She recently released the album Sideshow Cabaret alongside her band the Flat Fifths. Though she lives in the U.S. now, she used to run an expat joint with her husband in Chengdu, China, called Redbeard Burgers.

There are plenty of musicians in the world known to write their music while drinking, but Tate said she rarely pairs the process with anything more than a hot cup of tea. Still, some of her art has been birthed out of alcohol’s influence.

“Sometimes a bad night and a lot of bourbon can create something painfully beautiful, which is also part of my art,” she said. “I generally try to compose positive music and lyrics, but there is a bit of darkness as well- — a little dirt in the sandwich of life.”

Tate will often drink at shows but doesn’t ever go overboard, limiting herself to about one round per set. Playing the harp is a fine motor skill, and handling a piece of equipment that large isn’t something to be taken lightly.

The life of an artist, Tate said, can be maddening. Professional musicians’ craft can be as much a coping mechanism as a source of income. Alcohol can serve as a vehicle to help navigate the chaos.

“We use music to cleanse and communicate a lot of the chaos that we feel and that we see around us, another good use for booze,” she said. “Tom Waits said it best: ‘The piano has been drinking, not me.’” 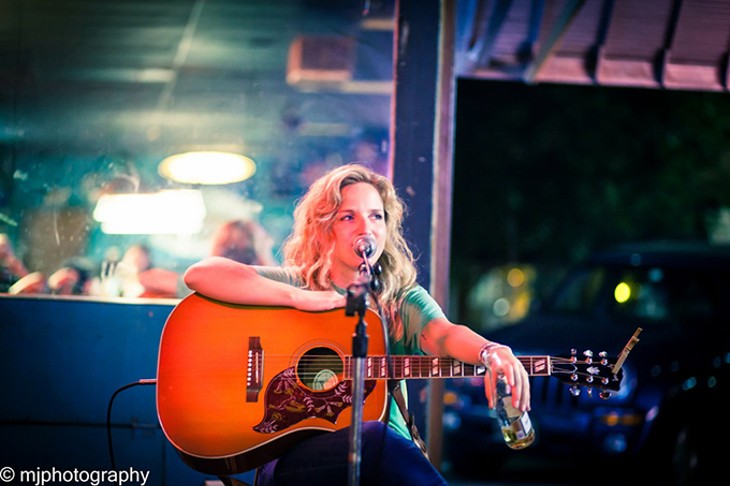 His most recent album gives a nod to the strawberry-kiwi Tropicana he enjoyed in his youth, but these days, Grand National’s taste in juice is a little more refined. He prefers the fizz of Moet & Chandon Nectar Imperial Rosé Champagne.

National, whose birth name is Ronnie Johnson, is a rapper from OKC’s northeast side. He is currently working on a new album titled El Camino Theory, which includes a song called “Champagne & Art.”

On occasion, he finds that alcohol helps make the recording process a little more fun.

“Sometimes I might have Champagne in the studio but I don’t really drink like that when I’m creating,” he said. “I’m more of a herbalist when it comes to creativity.”

In addition to Champagne, National enjoys having a beer in social situations. He calls himself a semi-regular social drinker.

“When I’m out with friends, they force me to drink with them, pretty much,” he said. “I love a good beer with my dinner.”

National said drinking culture is an integral part of his local scene, and alcohol and bar life are a big part of the concert experience in general. Music is about having fun, so if there is a way to maximize the amount of fun being had in a safe way, he is all for it.

“The booze makes people feel the music that much deeper,” he said.

If she is somewhere formal or classy, singer-songwriter Kierston White might request a dry white wine or a martini. But all things being equal, the admitted beer drinker will take an ice-cold European Yellow Belly beer any day.

White is a Shawnee-born folk and alternative country musician most known as one-third of the Tequila Songbirds trio with Camille Harp and Elizabeth Forsythe. She sometimes drinks while writing but will always imbibe while performing.

“I feel like a small amount is fine — it can even help ease the jitters or make ideas flow — but too much is a mistake,” she said. “I haven’t always recognized this.”

On White’s 2014 solo album Don’t Write Love Songs, she has a song titled “Alcohol.” It is not exactly a pub anthem, despite the name.

“It is more about addiction in general than it is about the drink,” she said. “It’s about begging yourself or someone else to clean up before they screw up.”

White enjoys playing quiet listening rooms, but she said there’s nothing quite like the energy that comes from an attentive bar crowd. Naturally, dive audiences are drinking while the music is being performed, which keeps them loose and jovial during the show.

The songwriter used to drink more than she does now, but within measure, she believes alcohol and music can be like soul mates.

“When I started playing shows in my 20s, I was quite the drinker,” she said. “Though there were some great times, I do wish that I would have been more present and focused at times. However, I do think I have a better relationship with alcohol now as I’ve matured in music and life. Everything in moderation.”