Life as a mobile bartender provides perspective on wedding and alcohol trends. 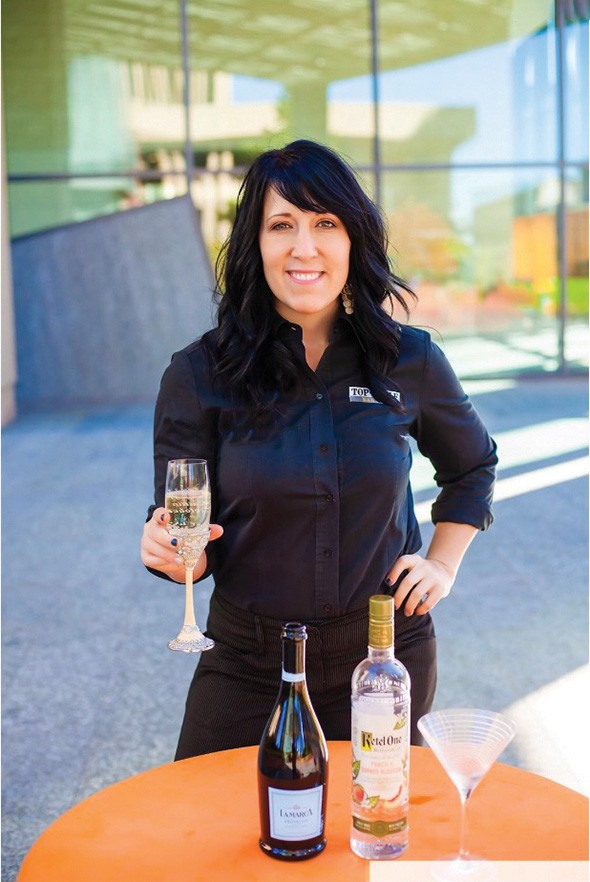 The cult classic Starz television show Party Down, which starred a pre-Parks and Recreation Adam Scott among its talented cast, went behind the scenes of all that could go wrong in event catering from the vantage point of its bow-tie wearing, want-to-be-actor crew. Everything that could comically go wrong did go wrong during the show.

In the real-life world of party bartending, Top Shelf Bartending owner Haley Ritter has seen it all, but a successful event bartending coordinator has an answer for anything that could go wrong when it happens.

“We train all of the staff in procedure and to have a plan,” Ritter said. “They’re trained to treat every event, no matter the size, that it is the biggest event of their life because to the host, it is. Every event has something go wrong, but that event host doesn’t know about it and they never should.”

In the two years since Ritter founded Top Shelf Bartending as one of the state’s only mobile bartending services, she has seen everything from entire cases of wine crashing to the floor to being forced to police the dance floor for unlicensed alcohol.

“Always have a plan B,” Ritter said.

The foundation for a successful event begins weeks or months before the gathering. Ritter meets with clients to develop a signature cocktail for the event and to square away the desired wine and beer, all of which is on a sliding price scale depending on the event’s size.

You never know what people will like because sometimes I’ll talk to the bride and offer a sweet drink, but she’ll say, ‘I’m a whiskey drinker.’Haley Ritter tweet this

“I like to meet in advance,” Ritter said. “During an event, we get so rushed that you don’t have time to get to know me. It becomes turn and burn. You’re there to see your friends, not us.”

Top Shelf can staff multiple events in one evening with a team that swells as large as 12 people during its busiest months. It has worked events all over the state, from the Stillwater area to Chickasha and downtown Oklahoma City. Events include baby showers, weddings, fraternity and sorority parties, quinceañeras, corporate events and celebrations of life following a funeral.

“We did 10 celebration of life events last year, and that’s something that’s growing in popularity,” Ritter said. “Ultimately, it’s a party, and we like to make a signature drink, something that is symbolic of the person’s life.”

Ritter takes the signature drink part of the job seriously, meeting with event hosts well in advance and making up to 10 drinks for them to try.

“I won’t tell them a certain drink has a certain kind of alcohol because I don’t want their thought process to be influenced,” she said. “We try to do fun things, like make the drink match the wedding colors. You never know what people will like, because sometimes I’ll talk to the bride and offer a sweet drink, but she’ll say, ‘I’m a whiskey drinker.’”

Ritter has noticed trends of all types over the years. Whether it’s the prevalence of once-relegated early 20th century drinks like the Manhattan and Old Fashioned regaining popularity or the preference of vodka water over vodka tonic.

“I’ve gotten really good at guessing wedding colors,” Ritter said. “I think of it as Joanna Gaines influence, lots of natural colors. I’ll see bridesmaids in sage greens and groomsmen in blue suits. There’s also been a coral and purple trend as well.”

She said that she is beginning to see more event spaces embrace an industrial aesthetic over farmhouse.

Since the implementation of Oklahoma’s new liquor laws that raised the alcohol content for beer and allowed the sale of wine at gas and convenience stations, Ritter has felt the blow of consolidated whole distribution. Under the new law, two companies handle the majority of the state’s liquor, Tulsa’s Jarboe Sales Company and Oklahoma City’s Central Liquor Company.

Top Shelf Bartending’s most popular months are in late spring and early summer, and bookings pick up in the fall through the winter.

“Last December was our busiest month in just a two-week span,” Ritter said. “It is a lot of Christmas parties. Even though they might be the same theme, they’re all different.”

Top Shelf Bartending has been a successful enterprise for Ritter since she started in the field as a side job. She said bookings have tripled from the first to second year, and business is already on it way to surpassing her goals for 2019.

“I’m really goal-oriented,” Ritter said. “Every year, I take an index card and put my goals on there: personal, fitness and last year I put Top Shelf goals on there with hope that I could exceed them. When I reevaluated them, I was blown away by it all. I set a new index card, and we’re already more than halfway there to my personal goal just a few months into the year.”