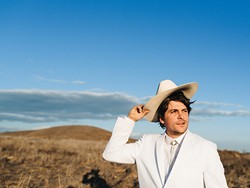 Dressed from the ankle up in all white, Dick Stusso sat in a folding chair on a low tide beach in Alameda, California, which is about as far away from Nashville as any hopeful country crooner could be without wading in the Pacific Ocean.

Stusso sipped a glass of wine while speaking to an anonymous somebody on his cell phone. His suit and wide-brimmed hat would not pass as anything a real cowboy would wear, nor are they flashy enough to be a true homage to Glen Campbell’s rhinestones. Stusso is a man trapped in the wrong time by his own stubbornness and rejection of — or acute sensitivity to — the way things really are.

Thankfully, the Stusso persona could be called as much of a disguise as his white hat. The character is an alter ego of Oakland-based musician and songwriter Nic Russo, who first developed the identity as a cathartic self-recording exercise that was not designed for distribution to the wider world.

In truth, the wider world isn’t always in on the joke. During the shoot for his “Modern Music” music video, the lead single on Stusso’s March 2 sophomore album In Heaven, the musician encountered some razzing.

“I got yelled at by somebody,” Russo said. “I was dressed in all white and they said I looked like an idiot, which, truthfully, is a little fair. He wasn’t wrong.”

In “Modern Music,” Stusso sings his cynical observations of society and the contemporary recording industry with a nihilistic shrug. The beauty of the video is in its utter simplicity.

“Like a lot of the things I find myself doing,” Russo said, “it was pretty much impromptu — just show up and make something happen. I kind of prefer it like that, just spur of the moment, off the cuff type stuff.”

Russo is not sure who yelled at him the day of the shoot or where that person might be now. The musician does not need him, or anyone, to “get” his art. He isn’t making it for them. But at the same time, it is always better to share the fun with others.

“Hopefully he saw the video and changed his mind and realized it was quite cool, what I was doing,” he said.

Russo’s first album as Stusso titled Nashville Dreams / Sings the Blues was released in November 2015. It is a lo-fi collection of recordings that, while not organized into a clear story arc, serves as exposition for Stusso and his country dreams.

On the album’s “The Ballad of Dicky Stuss,” Russo sings that Stusso’s parents gave him every opportunity for success in life, but his undying dream of reaching the unique type of Nashville stardom only available in yesteryear makes him an eternal wanderer.

“Now he roams the streets in his cowboy boots,” Russo/Stusso sings. “He’s a stranger to these modern times of ours.”

In Heaven suffered a significant setback after Russo’s apartment was burgled. Thieves took all his recording equipment, including his self-recorded demos for the new project.

“They took all my gear, which basically meant that I didn’t have an album anymore,” he said.

The thieves broke into Russo’s apartment soon after he left for work early in the morning. More alarming than his missing music equipment was the fact that his girlfriend was home at the time of the robbery. Russo said she slept through the incident and never encountered the thieves.

“First and foremost,” he said, “I was like, ‘Well, alright, they can have all the stuff. I’m just glad it wasn’t worse.’”

Russo said In Heaven ultimately benefited from the theft in the long run. Not only was the sound fidelity of the project better, recording with Ashley gave the album a cohesion and uniformity that Russo believes his scattered creativity wasn’t capable of producing on its own.

“It sounds like a record,” he said. “All the songs make sense together.” 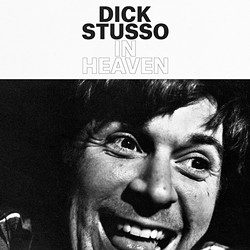 Russo is excited for his St. Patrick’s Day show. He has never been to Norman, but has visited a friend in Oklahoma City in the past. Russo said he enjoys St. Patrick’s Day, but not that much more than other opportunities to have fun with friends.

“I do enjoy the drinking festivities,” he said, “but not any more than at any other time.”

Russo is Irish on his mother’s side. His father comes from an Italian background, but the holiday actually doubles as his birthday.

“I’ll be giving him a monster shout-out from Norman,” Russo said.

The Stusso persona is one that developed naturally over time. Russo used to work long hours in a grocery store, interacting with customers. He wrote and recorded as Stusso privately as a way of venting.

“You put on a certain face to the public and I think a lot of the character was this nasty, other side,” he said. “It was rumbling beneath all day long.”

The Soundcloud-posted material has since found a nice audience that has turned Russo’s solo venture into a touring, four-piece band. When Russo is out doing shows, he never leaves his Stusso persona. But the acting feat does not require as much effort as one might guess. Stusso, after all, represents an existing side of Russo’s personality that was suppressed, not a new one he invented.

“The character itself is not that dissimilar from my normal self,” he said.

In that sense, Stusso can be counted less as an invention by Russo and more of an embrace of self.