Many liquor stores were open for the first time this past Sunday after seven counties across the state voted to approve Sunday liquor sales. 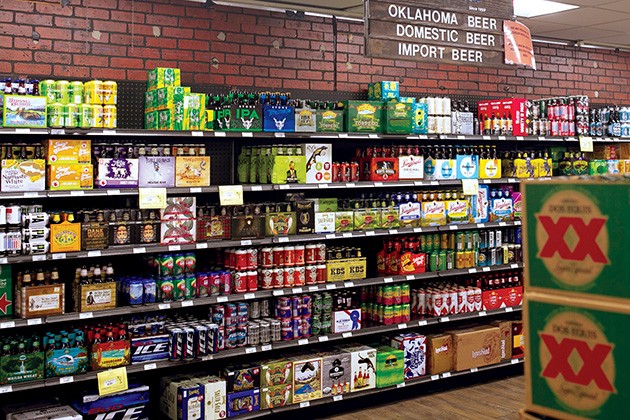 Oklahoma’s liquor laws have come a long way in a matter of years. In October 2018, State Question 792 changed the game for Oklahoma breweries and liquor stores.

The alcohol law reform went into effect that month and allowed breweries to sell their full-strength beers in grocery and convenience stores. It also allowed accompanied guests under the age of 21 in taprooms, which could also stay open until 2 a.m.

For liquor stores, it meant finally being able to sell refrigerated drinks and things other than alcohol.

Up until that point, Oklahoma had among the most restrictive alcohol laws in the nation. The state question was one way to modernize Prohibition-era laws. But because it allowed grocery and convenience stores to sell full-strength beer and wine, many local liquor stores struggled to compete.

Bryan Kerr, president of Retail Liquor Association of Oklahoma (RLAO), previously told Oklahoma Gazette that the state has been losing about two local liquor stores each month because they can’t grapple with the competition. Not only did liquor stores have to invest capital money into refrigeration systems initially, but they struggle to offer what the convenience grocery stores do.

“I would guess 90 percent of the people who shop at Walmart do so simply because they don’t want to make another stop,” Kerr said.

However, other laws have passed to modernize liquor laws even further, like House Bill 2325, which went into effect last November and allowed Oklahomans to bring their underage children into liquor stores.

“I’m hoping that Sunday sales increases local liquor store revenues enough so that we stop losing so many stores,” Kerr said. “It’d be nice not to be losing so many local businesses so quickly. We kind of knew that would happen. It’s almost three a month since the new laws were passed, including mom-and-pop shops and some even bigger ones that just can’t do it anymore because they’re not making any money.”

Despite not being able to sell liquor, convenience and grocery stores could sell beer and wine on Sundays while local liquor stores couldn’t make any sales at all. That changed with the passage of Sunday liquor store sales, which took effect last Sunday after election results were certified. Many liquor stores like Moore Liquor already took advantage of the extra day in sales.

“It’s a novelty for people, so we had some come in just so they could say they could shop on Sunday,” said Kerr, who owns the store. “Generally speaking, it looks like it’s going to be a nice extra day for people to shop. Numberswise, we had about the same number of people as we’d have on a weekday. We were open for seven hours, noon to 7. … I imagine by the end of March or the middle of April, we will know. My expectation is a 5 percent increase in revenue which would be great.”

Kerr said studies in other states show about a 5 percent increase in liquor store sales if they are able to operate on Sundays, but he said time will tell how the local market interacts with an additional shopping day.

“Time will tell on that, whether there will be extra sales or spread-out sales. If we make the same amount of money in seven days that we made in six days, we’re really looking money because we’ve got labor costs. But we don’t think that will happen,” he said. “I really think the extra day of convenience, especially since it’s a Sunday when most people are off work, will result in a slight increase in revenue. … I’m happy to be up here and be available to customers.”

Muskogee County (5,648) had the least support with only 56 percent.

“We were happy to see that there was good voter turnout and that it passed,” said Lisette Barnes, president of Oklahoma Beer Alliance. “We were very happy to see that that happened but weren’t really surprised. … We’re a supporter of the modernization of liquor laws, and we’re always very supportive of anything that improves responsible drinking. We always support measures in that respect too.”

Oklahoma Beer Alliance is an organization of beer distributors and brewers with a mission to “support responsible and safe alcohol laws for Oklahomans.”

“That was our vested interest in this issue and why we wanted to see it,” Barnes said. “We just felt like it was a fairness issue and something consumers wanted to see as well. We were working through social media and press releases and speaking to folks to get the word out. … We wanted as many people as possible to vote first of all and to vote yes on this measure to provide some equality for those retailers because their competitors could stay open on Sundays and they couldn’t. It was one of those laws left over from the Prohibition days.”

Though many are hesitant to say this measure will level the playing field for local liquor stores and their competition with big convenience chains, Barnes said it will definitely help many struggling stores.

“That’s why we were very supportive of the issue going on the ballot. … What’s great about this is that this gives local liquor stores an option to be open on Sunday. Certainly if it doesn’t make sense for their business model, I don’t expect all liquor stores to be open on Sunday because it might not make sense for them,” Barnes said. “But it certainly allows them as a business owner the best step for their business model, and it gives consumers another option of another place to buy their favorite beer, which is what we’re all for: consumer choice.”

“We had some counties reach out to us … asking, ‘How do we do this? What is the language like?’” Barnes said. “We’re hoping by getting the word out in the seven counties, hopefully some other counties will have it on their next ballot. Maybe their county commissioners will put it on there.

“I’m just glad that this is moving in the same direction as consumers showed their preference for when they supported State Question 792 to modernize our liquor laws. I think this is all moving in the same direction: providing consumers with more choice, providing businesses better opportunities. … You saw that too when they allowed consumers to take their children in liquor stores. … In this case, it’s something that also benefited local liquor stores. It’s a win there for those businesses and for consumers.”