He’s just barely past the legal drinking age, yet Alex G (born Alex Giannascoli) has created more songs than some musicians do in a lifetime. 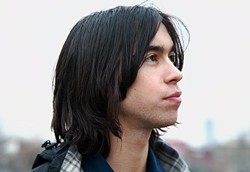 81. That’s the number of songs Alex G has written, recorded and self-released on his Bandcamp page in the past four years, the symptom of an insatiably creative kid growing up in a modern era where the walls between writing, recording and releasing music have been all but demolished.

There’s even more than that. Songs that have never been recorded, music released as electronic artist Rubberthump and through his band The Skin Cells — he’s just barely past the legal drinking age, yet Alex G (born Alex Giannascoli) has created more songs than some musicians do in a lifetime.

And 20 years back, when the access to studios was narrow and label distribution even more elusive, people might not have even been able to hear any of it.

“I have no point of comparison, no point of reference. This is the only reality I’ve ever known,” Giannascoli said of the modern, wide-open world of DIY music. “I got really lucky, I think. What I’ve been doing, that hasn’t always been possible.”

As fast-rising as they come, Alex G is mid-transformation from URL superstar to IRL music hero. Maybe it’s because his songwriting is as stunning as it is prolific: simple, pretty hooks layered with astute lyricism and guarded optimism through confidently lo-fi compositions oft compared to a Built To Spill or Elliott Smith.

He has a live band but writes alone, a solitary wellspring of chords and melodies.

“I’ve always done it that way and probably always will. I take a lot of pride in it, and it’s one thing I can’t really trust anyone else with,” Giannascoli said. “I get a lot of satisfaction out of doing it. It’s something that I can’t even explain.”

The acclaim is piling on, both from fiercely devoted fans and Orchid Tape labelmates who not-so-jokingly refer to him as the greatest songwriter alive.

But Alex G — playing Sunday at Dope Chapel — is quick to brush aside such high praises (“It’s a little silly, obviously.”) or even the notion that he’s a true natural.

“It’s not like I pull a melody out of thin air,” Giannascoli said, recalling jamming with his older brother and being envious of his ability to play by ear. “I spend a lot of time chiseling away at it, to find the most essential, good things. I think what’s most important is that I know what sounds best to me. I’m really in touch with myself, in terms of music and knowing what I like.”

Everything comes together on DSU, his latest full-length album that acts as something of a true debut to the wider world and couldn’t be a better introduction. It’s a nuanced record that plays as well on the first listen as the 20th, one that would have transcended whatever era it was born out of.

“I wanted to get across, with that album, a lot of layers. I didn’t want it to come across so straightforward,” Giannascoli said. “I wanted to make an album you could think about a little bit, where everything doesn’t always go where you think it’s going to. And I think I succeeded in that.”

Alex G with Cosmostanza and The Hitt Boyz

Alex G with Cosmostanza and The Hitt Boyz