If you suggest grabbing a meal at Alfredo’s to an uninitiated friend, don’t leave off the Mexican Cafe part. This restaurant is a spicy, satisfying, south-of- the-border wonderland.

Our server Dulce was full of personality. The five-page menu was unfamiliar, and her patience was boundless. There were no surprises among the enchilada, burrito, tamale and many other offerings I ordered.

Few dishes at Alfredo’s are more than fifteen bucks, and most categories also have vegetarian options.

Beer and margaritas are served as well as soft drinks. The conversational level in the dining room was at a reasonably festive level, and patron groups leaned heavily toward the family crowd.

The overall atmosphere was less an intimate Mexican cafe and more a restaurant system aspiring to be a national chain.

Mexican street tacos ($11.99) did indeed appear to be what might be served from a street corner truck at midnight in just about any diversity-rich neighborhood. Soft wheat tortillas were smeared with tomatillo sauce then loaded down with grilled beef steak. The whole shebang was sprinkled with jalapeños, cilantro, diced raw onion and guacamole. 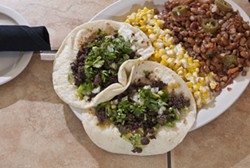 The side dishes turned out to be the stars of the platter. There are 14 side choices, and Dulce hit another home run by pointing out Mexican corn and chino beans among the more common items. My guess is that Mexican corn’s secret most likely is mayonnaise. It’s creamy, smooth and tangy.

Unlike elotes, which is generally a grilled cob of corn slathered with condiments, this was like Midwestern U.S. creamed corn that might have also benefited from sour cream, butter and cheese. The corn was diabolically delicious. Chino beans were dry-fried with bacon and onion, resembling the nutty flavor of crowder peas. It was the generous addition of smoky bacon that transformed these lowly frijoles into something special.

Parrilla chicken ($12.99), aka grilled white meat, was piled with sauteed onions and peppers and was smothered in cheese. The meals were wholly satisfying, but we were reminded that sopapillas with honey were included and coming out of the kitchen next. The diminutive sugar-dusted pastries arrived as if they were delicate pillows warmed by an angel’s fevered brow.

Conveniently located in an easy- access strip mall along the interstate, Alfredo’s is a popular place. There was no wait for a table on a recent Monday evening, but several massive wooden benches in a reception area hinted at weekend delays.

The place is decorated with faux hacienda support beams and hanging lanterns, but a multitude of potted tropical plants turned out to be genuine. Five TV screens are wall-mounted and within view. Fortunately, their sound was muted and vibrant Latino music played on the sound system the entire time we were there.