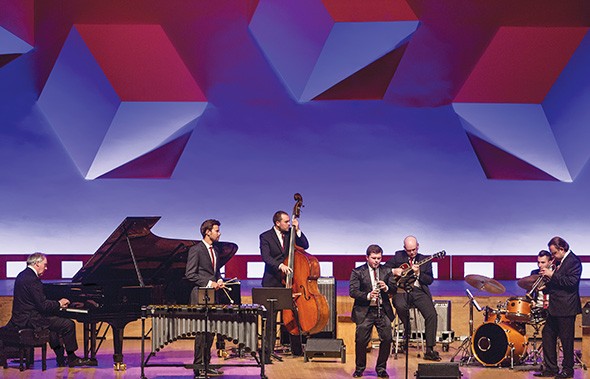 Born in Chicago in 1909, Benny Goodman began playing clarinet at age 10, taking lessons at a local synagogue before playing in jazz bands as a teenager. He rose to national prominence in 1935 and became known as The King of Swing, leading bands that included other luminaries such as Gene Krupa, Harry James and Charlie Christian, but his interest in classical music led him to record Wolfgang Amadeus Mozart’s Clarinet Concerto and commission compositions from Béla Bartók and Aaron Copland.

Born in the UK in 1989, Julian Bliss began playing clarinet at age 4, performed at Buckingham Palace at age 6 and studied classical music under groundbreaking clarinetist Sabine Meyer before forming a septet to release an album of Goodman’s music in 2012, something he hadn’t imagined when he first bought a Goodman CD on a trip to America at age 7.

“I never really considered playing any jazz myself up to that point, even then to be honest,” said Bliss, scheduled to perform A Tribute to Benny Goodman with his septet 7:30 p.m. Thursday at Armstrong Auditorium, 14400 S. Bryant Road, in Edmond. “I listened to it, and I liked it, but it seemed far removed from what I was learning, what I was doing, and I didn’t really consider playing jazz until many, many years later when I was putting together a new project. … We thought we’d arrange a couple of tunes of Benny Goodman’s, tunes he made famous, and then it just kind of grew from there really. … I had always listened to jazz, and when it comes to jazz and clarinet, that’s a pretty good place to start, I would say.”

While Bliss had to learn new playing methods and another branch of music theory in order to play Goodman’s music, he said the two styles are more alike than listeners often realize.

“I don’t feel that jazz and classical are as separated as some people make out,” Bliss said. “There’s a huge amount of similarities. It all stems from the same thing. You have a music theory to each discipline, and when you’re on stage, you are trying to improvise in one way, shape or form. The only difference in classical is that you have the notes on the page to play and in jazz, sometimes you don’t. … It’s all about giving the audience a good time. Essentially you’ve got to entertain them.”

Julian Bliss Septet’s album A Tribute to Benny Goodman includes versions of many of the clarinetist’s most famous songs including “Don’t Be That Way,” “Moonglow” and “Avalon,” but Bliss said he doesn’t just want to cover the classics note-for-note.

“What we’ve done with the show is taken some tunes that he made famous or was associated with and then put our own spin on them because jazz evolved over the years,” Bliss said. “Playing with the other guys I have in the band, who are absolutely phenomenal, means we can have a bit of freedom and we can come at these tunes from a slightly different standpoint. I’m still trying to remain true to the sound and feel at least of how it was back then, but in terms of style, I always say play whatever comes to your mind. … In the beginning, we would listen to a lot of arrangements of Goodman to see what we liked and what kind of changes we wanted and what sort of framework, but from there, we tried to let it just be its own thing. … You’ll never be Benny Goodman, obviously, so we wanted to make it something different, kind of a modern take on that style of playing.”

In addition to Bliss, the septet includes Martin Shaw on trumpet, Lewis Wright on vibraphone, Neal Thornton on piano, Colin Oxley on guitar, Tim Thornton on bass and Ed Richardson behind the drum kit.

Hearing Goodman’s take on classical compositions such as Mozart’s Clarinet Concerto, which Bliss has also recorded, provided a new perspective on the relationship between jazz and classical music and more insight on Goodman as an instrumentalist.

“There are some elements of his playing that people would term unconventional as a traditional classic clarinetist, but they’re all good things and a very interesting take,” Bliss said. “We should always be open to hearing different interpretations of the same piece of music because you might hear something that you really like, and it’s nice to hear a fresh approach. So I’ve always enjoyed listening to his recordings and whenever they’re at times unconventional and the way he plays isn’t the way everyone would play, if nothing else, it’s interesting to hear.”

Performing works by Goodman and other jazz artists has shaped Bliss’ classical performances.

“Playing jazz has had an influence on my classical playing,” Bliss said. “I think it’s the freeness of jazz where we go out onstage and we don’t really know what’s going to happen until it happens. Accepting that, if you like, has led to a certain type of freedom and of feeling relaxed before I go out onstage. … It’s nice to be able to bring that element to the classical playing, too.”

Performing Goodman’s works in environments suited for symphonies can also give audiences a different listening experience.

“Most of the concerts that we do as a band for this project are in concert halls instead of jazz clubs,” Bliss said. “In a jazz club, it would be very informal. People would be eating and drinking and talking to each other, but here, they’re sitting down and watching the show. … So even though there are similarities, it is a very different atmosphere, and we encourage the audience to, if they hear something they like, make some noise. Feel free to get up and start dancing. … To be honest, the more into it the audiences get, funnily enough, the more into it we get. It’s that adrenaline. The more you see people enjoy it, the more you get into it and try and take risks because you feel very comfortable and very free. So we like it when the audience is having a good time because it means that we’re doing something right.”

But because of jazz’s improvisational nature, Bliss can’t say for certain what exactly each show will become until it takes shape.

“It’s never the same from one gig to another,” Bliss said. “We could do 10 gigs in a row and they’d all be fairly different, so it’s a living thing.”

A Tribute to Benny Goodman