All in mentality is driving Wheeler District 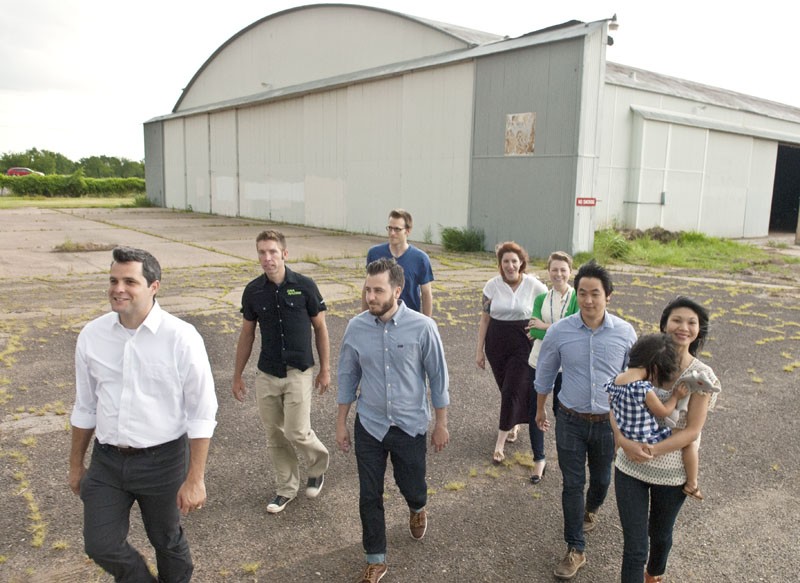 There’s something spiritual about the way Blair Humphreys talks about the Wheeler District.

The future homes and businesses are unseen, yet, at the same time, it’s easy to feel as if the spirit necessary to make the neighborhood a reality already exists.

“There is a spirit of possibility here,” Humphreys said about both the Wheeler District and Oklahoma City. Straddling the Oklahoma River along Western Avenue just a few miles southwest of downtown, a former downtown airport and surrounding land was acquired by The Humphreys Company in 2007. Over the years, the plan for the property transformed into a desire to build an urban village from scratch and include significant input from the community.

“If you are going to sell a [parcel of land] in a place that says it’s all about community, I think you need to make sure that’s true from day one,” Humphreys said. “You actually have to have people plugging in at every stage, and it actually has to be a shared vision.”

Before any construction begins on the new neighborhood, project leaders have invited the public to share their own ideas for the community, which included a public meeting last week.

In a downtown studio, members of the local Wheeler District team, along with planners from Dover, Kohl & Partners, a Florida-based town planning firm, spent time last week compiling ideas submitted by the community in an attempt to put together the first draft of a comprehensive plan for the Wheeler District.

One of the lead planners with the firm, Victor Dover, said the Wheeler District site presents enormous opportunities that are sometimes hard to find in other developments. The river offers a natural landmark with sweeping views, downtown is a short bike ride away and the site straddles Western Avenue, giving developers a chance to redefine a city street, Dover said.

“I think this is a terrific location,” Dover added. “It’s completely lucky.”

Property management now hosts outside concerts and weekly bike races. An urban farm has been launched, and a Ferris wheel has already been purchased for the site. But what is still mostly a couple of dilapidated runways and an old airplane hangar could someday become a neighborhood of diverse housing options, public spaces and retail establishments.

“People are already building their dream homes in their heads,” said Allison Bailey, a local retail consultant who is part of the development team.

There is also a plan to keep the airplane hangar and convert it into multipurpose space.

“This could be such a cool building,” said Jonathan Dodson, who is helping with the Wheeler District development. “You can throw a brewery in there, a coffee shop in there and it just becomes a community asset for all the people living here.”

Dodson has already started to recruit businesses for the hangar, and a list is beginning to emerge.

“We approached people we wanted to be in the [hangar], and they have all said yes, so it’s not like we have had to go find someone to help us tenant the place,” Dodson said. “These are cultural curators who will help make this community.”

Planning for Wheeler District comes at a time when there is a growing demand for a more urbanized culture in OKC, which is one of 19 cities across the nation that grew at a faster rate than its suburbs last year, according to a Brookings Institute report.

There is also an influx of younger residents — often called millennials — who bring redefined thoughts on what a community should look like. During a public meeting last week, a poll was taken of the couple hundred who attended to share ideas for the Wheeler District, and nearly half were in their 20s or 30s.

“We hardly ever see that [demographic] at these types of meetings,” said Pam Stacy, a planner with Dover, Kohl & Partners.

“There is the general shift [across America] towards making and creating things, but there is something in OKC that makes us especially well-suited to that trend,” Humphreys said.

However, it’s not necessarily a spirit only found in young adults. “I feel like I relate to that crowd,” Ward 5 Councilman David Greenwell, 60, said following last week’s public event. “Everything they want in a city I want as well. It’s not just a generational type of issue, but it’s about what’s the best answer for the the city. And [Wheeler District] gives me great confidence that the city is going to create future leaders that have that same vision.”

Planners will offer a rough draft for the Wheeler District this week based on the ideas shared at last week’s public meeting and other events. Project leaders hope it’s the first step in a major development that could begin to take shape in the coming years.

“We had hoped to create a sort of grassroots feeling with this process,” Bailey said. “There is something that is a little unpredictable about this, and I think that’s what makes this exciting.”