“We continue to perpetuate this idea that we’re outnumbered,” Owens said. “We keep saying, ‘My vote doesn’t matter.’ It’s just that the red [Republican] people are louder.” 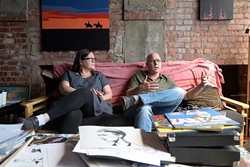 When local artist Jack Fowler journeys beyond his social circle, he is reminded that his opinions sometimes clash with what is often considered a majority view.

It is a reality he knows many of his art friends share, so Fowler, a self-described political progressive, curated and organized an all-star art exhibit as a platform to voice the frustrations that come with advancing social conversations beyond fear, hate, bigotry and left-right dogmas.

Outnumbered was partly fueled by Fowler’s desire to work with artists he hadn’t before, but the inspiration arose from a conversation he had with a stranger. Fowler said he was shocked by the man’s blatantly sexist and violent statements.

“I was like, ‘You know, you couldn’t talk to a stranger that way in my neighborhood,’” Fowler said.

Misogynists and racists clearly do not represent most self-identifying conservatives, but Fowler said he thinks the rise of boisterous Republican presidential nominee Donald Trump amplifies the voices of people who do harbor those beliefs, especially in Oklahoma.

“I thought, ‘We’re a really small percentage of where we live in this state,’” he said. “I think the city has become big enough now that I can forget that. Everyone I know now is Adam, Romy and people I know that share a view of the world that I do.”

Lanman and Owens joined Fowler to discuss the project during a recent Oklahoma Gazette interview. Lanman said the state legislature’s actions regularly cause him to wonder exactly whom lawmakers truly represent.

“It perpetuates this idea in me of, ‘What am I doing here? What is going on? Who are these people?’” he said. “And yet everyone who I socialize with — everyone who I see on a regular basis, the people I work with — don’t hold these views.”

“Everything that comes out of that building is an Onion article, and it’s never because it’s too liberal,” he said. “It’s not like we’re passing flaky San Francisco laws.”

Both artists agreed conservative lawmakers often promote and defend policies that clearly contrast the biblical principles many of them also claim to champion. 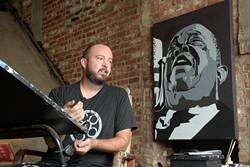 Other Outnumbered artists, like Owens, believe many liberals are discouraged from voicing their opinions or being politically active because they are routinely fed a public and media narrative that tells them their opinions are meaningless.

“We continue to perpetuate this idea that we’re outnumbered,” Owens said. “We keep saying, ‘My vote doesn’t matter.’ It’s just that the red [Republican] people are louder.”

Fowler said the Democratic party’s platform has shifted dramatically from where it was generations ago. He believes many of the state’s voters register as Democrats because their family always has.

Owens said while the political gap might not be as wide as some make it out to be, a lack of tangible returns in the form of approved political policy can be frustrating.

“The sentiment I totally get, because it is scary that we live in an America that is this divided,” she said. “I think Oklahoma is very representative of many states.”

Fowler and the rest of the Outnumbered artists know art can be a powerful tool to push back against what they view as misguided policy.

If political discourse is a boxing match, then progressive contenders have been rabbit punched while on the ropes.

“I think we’re losing, and that’s why I’m in the show,” Lanman said. “I think the policies that are in place in Oklahoma are some of the most backward in the country — flat-out.”

Fowler said he is happy artists are sharing their perspectives and experiences through the exhibition.

“If we were all doing the same thing, it would be more like a meeting of accountants or something,” he said. “I’m just excited to see what everyone does.”

Print headline: Toe-to-toe, An all-star roster of local artists strike back against a perceived political majority.