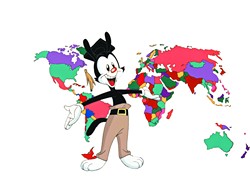 Rob Paulsen and Randy Rogel have been called a lot of things, including “totally insaney” and “zaney to the max.” But there is another thing one should feel free to call two of the key figures in the popular Animaniacs cartoon series: pioneers of animated entertainment.

The Warner Brothers animated series Animaniacs endeared itself to a generation, running five seasons from 1993 to 1998. The show, executive produced by Steven Spielberg, was directly inspired by the general irreverence of Looney Tunes and Warner Bros animation of the past. It was a smartly written show often credited as a forerunner to the adult-oriented animation that followed it.

The show could also be compared to a cooler, more contemporary version of Schoolhouse Rock. The series is packed with songs and blended plenty of references to history and geography with topical jokes on entertainment and pop culture. The song “Yakko’s World,” for example, is a comprehensive and often-memorized rundown of the countries of the world.

Most people would not recognize Paulsen if he walked past them on the street, but he has voiced so many beloved animated characters over the years that it is hard to know where to begin. Many know him for the voices of Yakko Warner from Animaniacs and Pinky from Pinky and the Brain. His other show credits include Teenage Mutant Ninja Turtles (both the 1980s-’90s version and the revival series currently airing on Nickelodeon), The Adventures of Jimmy Neutron: Boy Genius, and The Mask Animated Series.

Paulsen is on the road with Rogel, the composer responsible for writing many of the Animaniacs songs, and is set to appear Dec. 8 at Tower Theatre, 425 NW 23rd St. The legendary voice actor recently spoke with Oklahoma Gazette by phone ahead of the show.

Oklahoma Gazette: A lot of people in OKC are excited for the show, but many of them are not sure what to expect from it. Could you explain what Animaniacs Live! is?

Rob Paulsen: Absolutely. Thank you for giving me the opportunity to do that. Randy Rogel, who wrote most of the songs that people know from Animaniacs, and I got a deal a couple of years ago with Warner Brothers licensing where we’re allowed to take the music of Animaniacs and animation clips and travel around the country doing what we’re doing in Oklahoma City. It is an evening of music, of animation, of stories, Q&A and autographs — things like that. We tell people how songs came to be. We do songs on the show that never made it to the show. It’ll be kind of mind-blowing, because the songs that never made it are so good, I still to this day think, “Well, what the hell was wrong with that?”

OKG: Animaniacs is such a good candidate for a live production because it was a mature show and it didn’t ever talk down to its audience, which probably helped it have this staying power.

Paulsen: That was utterly by design. The edict from the beginning, from Mr. Spielberg and Tom Ruegger and the people who created it, was precisely that: to not condescend to the audience. It was about assuming they would get it. That doesn’t necessarily mean that it was built for kids. It was written on two different levels so that the kids might enjoy it and the cultural references and the music references were to entertain adults. The proof that it works is its success on Netflix. I just got back from Vancouver last night, and I go to all of these conventions all over the world. The one thing I hear over and over and over again is, “Oh my God! I never got this joke or that joke; how did they get that by the censors?” And that was completely by design. So the genius of how that was produced is borne out 20 years later.

OKG: It’s often said that Animaniacs was a precursor to shows like South Park or Family Guy, but the show also paved the way for Rick and Morty, which is super popular right now.

Paulsen: Yeah, and if you talk to [Morty co-creator] Justin Roiland, he’ll say the same thing. That’s a huge compliment to me because I work on Rick and Morty. I’m on probably a half a dozen episodes, one of them is one of their most popular ones (the episode “Lawnmower Dog” as the character Snuffles, also known as Snowball). Snowball is the little doggy in the mech suit that asks about the location of his testicles. It’s a great episode, and man oh man, I go all over the place and people freak out over Snowball. And it’s just one episode of that show, which is a wonderful show.

OKG: Almost everyone of a certain age or younger can recognize your voice from somewhere. Just by speaking, so many people would know you, but walking down the street, you probably have some anonymity, right?

Paulsen: Oh, absolutely. It’s very clear: It’s the characters who are famous. I don’t draw them, and I don’t write them. That’s a very clear distinction; I’m not some sort of celebrity. I’ve cultivated some just as a result of my association with these characters. … When people find out who I am, all it does is bring joy to their face. They laugh and say, “Oh my God! can you say ‘Cowabunga, dude!’ or say, ‘Think so, Brain.’ Whatever it is, it just makes everybody happy. Because of video and YouTube, I get recognized more than I did 10 years ago, but it’s not like being Brad Pitt. It’s not like you can’t go to the store. In fact, I welcome it.

OKG: Did you have any musical aspirations before voice acting?

Paulsen: Oh yeah. I was a singer first, and I traveled around the country doing live theater. I was in a rock ’n’ roll band for years before I moved to LA. Singing has always been a huge part of my life, and it’s how I pay my rent. I think like most kids, it would have been great to have been in a rock ‘n’ roll band that did really well, and the bands that I was in were very, very good cover bands, but our originals were just awful. And I didn’t contribute to it — I’m not a great songwriter. But I cultivated my singing skills, and moreover, I cultivated my skills to be able to sing in character. And I did not come to LA to do voice work. I came to LA to perform and work. And when I came here, it was doing live-action stuff like everyone else — TV, movies, commercials. But you learn pretty quickly that there are a million average-looking white kids with SAG (Screen Actors Guild) cards, and a lot of them, not all of them, are really, really talented. And you just kind of go, “Holy shit, I thought I was pretty good.” Well, guess what? There are a lot of talented kids in this world, son, and they all come to LA.

… In my case, it was all about being prepared when these opportunities that were utterly unknown presented themselves to me. You’ve probably heard in your life the phrase, “Luck is when opportunity meets preparation,” and it’s absolutely true. Had I not been singing and learning how to sing in character just because it made me happy and made me laugh — all of a sudden, that skill is exactly what Steven Spielberg needed in Animaniacs, and man, what good timing. It’s turned out to be the best choice I could have ever made, voice work, because I’m a lot older, but I can still do everything to the same level and even better than I did 20 years ago because nobody cares what I look like.

OKG: And it’s taking you to all sorts of exotic locations.

OKG: Is there anyone in Hollywood who knows the countries of the world better than you?

Paulsen: Nope. I think there are many people who can sing it (“Yakko’s World”) all over the place, but in terms of them doing it better — I think they can do it just as well, but I think, and it’s probably a little presumptive of me, because I’ve not heard everybody, but I would think at least right now I’m still the guy who does it the best. And I think most people would be fine with that.