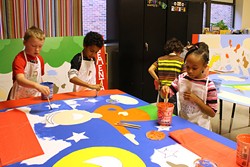 The nonprofit foundation raises private contributions to benefit underserved and other cultural and arts education and programming across central Oklahoma.

This year’s campaign ended June 30 and brought in a record number of 6,243 donors who pledged just under $3 million, Senner said. That amount is lower than the $3.3 million raised during last year’s fundraising campaign.

Oil prices are important because some of Allied Arts’ biggest donors are energy sector companies and employees. The enthusiasm of employee giving campaigns within those companies also contributes to successful Allied Arts campaigns.

Energy company donations comprised 37-39 percent of Allied Arts gifts in the past, Senner said. In 2016, she believes faltering oil and gas revenues influenced the sector’s donation plunge to about 20 percent.

Energy sector layoffs in late 2015 and early 2016 reached into the thousands. The reductions also struck a blow to employee giving campaign participation and overall excitement related to its annual funding drive.

As a result, the capacity for Allied Arts to maintain giving at the same historic highs of recent years also took a hit, she said.

Senner said this year’s campaign was “[the] most difficult yet,” but she’s still upbeat. Allied Arts executed successful new fundraising approaches and its board continued raising money through the close of the fiscal year in June.

“I just kept thinking, ‘One more kid can be helped’; that was the driving factor in keeping me going,” Senner said. “In light of the economy being what it was, I would say that the biggest surprise was that we ended up where we did.”

Creative thinking and innovations helped overcome much of the potential shortfall, she said.

The organization “targeted everyman” by showing where funds go and what its programs do.

First lady Terri Cornett, the wife of Oklahoma City Mayor Mick Cornett, is an experienced media ad sales executive. Allied Arts hired her as an independent contractor to help develop the campaign’s deeper concepts. More emphasis was placed on internal employee giving campaigns and swaying donors within those companies to “step up” participation.

Senner said the organization was determined to make sure funding for youth arts programs was not cut any more than necessary.

The Arts Council is most widely known for organizing the popular Festival of the Arts in the spring and the Opening Night event on New Year’s Eve in downtown OKC.

When Arts Council learned what its budget would probably be, it decided to make sure its metro-area All Access Arts program would be spared from cuts, Dolese said. All Access Arts hires art teachers to lead afterschool programs for elementary children and senior adult programs in nursing facilities.

“We just felt like that program was too valuable in a year when public schools have to make cuts in that area,” Dolese said.

Instead, Arts Council chose to cut its storytelling festival because of the already-strong festival Territory Tellers has hosted for a decade.

“We knew that storytelling was not going to be lost if we cut that part of our program,” Dolese said. “The most important thing to remember is that if you aren’t being creative and being very wise with how you spend your dollars all along, you’re going to be lost when there’s a downturn in the economy.

“With the Arts Council of Oklahoma City, we are constantly aware that we’re not entitled to anything. We’re very careful with how we spend our money.”

» Oklahoma Shakespeare in the Park