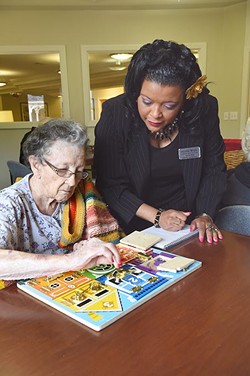 Anyone with a brain is at risk of developing Alzheimer’s disease, according to Alzheimer’s Association. Furthermore, out of the top 10 causes of death, it is the only one that “cannot be prevented, cured or slowed.”

Also known as senile dementia, Alzheimer’s is a progressive disease that destroys memory and mental functions.

The devastation the illness causes in patients is difficult for family and friends as they watch Alzheimer’s progress in their loved ones.

It also takes its toll on the health and well-being of caregivers: 40 percent of them suffer from depression due to the stress of caregiving, according to Alzheimer’s Association. Caregivers are also more likely to have health problems such as strokes and heart attacks.

Long-term placement is often the answer for many families.

“We begin assisting families with a tour of the facility here to show it is a comfortable, safe place to be,” said Holly Miller, an administrator at Prairie Winds Alzheimer’s Special Care Center, 8300 N. May Ave. “A lot of families are dealing with the fact that a family member’s memory is vanishing, so we help them through these changes.”

Prairie Winds works with families by fully integrating them with a plan. For example, when a spouse is taken to a long-term treatment facility, the center helps with the transition.

“Family members are assured they can come at any time to see their loved one at any hour; we do not have visitation hours,” Miller said. 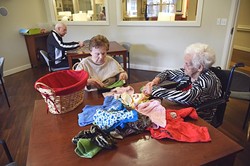 When working with someone who has Alzheimer’s, it’s important to incorporate comfort tasks, things that they love doing, such as caring for pets, gardening and music.

Meaningful Moments is a program at Prairie Winds in which staff design a resident’s care plan. It’s an entire way of living that incorporates patients’ culture, life history and life story.

“One of the things we do regularly is sit down and have conversations about their past and reminisce with them, remembering what they loved to do when they were young,” Miller said.

Pet therapy, art projects with staff from the Oklahoma City Museum of Art and other activities keep the residents engaged. Daily rituals are also an integral part of therapy. Many residents find comfort in activities like completing puzzles, playing dominoes, folding clothes and planting vegetables.

One resident loves helping people and has daily tasks to do — repairing and fixing things — that keep him busy assisting others.

Guilt is common when placing relatives in a care facility, and Prairie Winds provides a family support group because they believe the best way to deal with the guilt is to let people talk about it.

“No one is going to be able to tell them how to feel better, but by listening to them, we find everyone has answers within them,” Miller said.

Alzheimer’s is considered one of the costliest diseases in our society. The disease will cost the US $226 billion in 2015. By 2050, the Alzheimer’s Association estimates the cost could reach $1.1 trillion.

“My father had Alzheimer’s the last three to four years of his life, most evident by short-term memory loss. For example, when ordering lunch, he couldn’t remember what he ordered just minutes ago,” said Jack Jerman, who has watched Alzheimer’s progress with both of his parents.

The Alzheimer’s Association 2015 Facts and Figures report shows that 45 percent of people with thedisease or their caregivers were told of their diagnosis before the disease became advanced. One common reason cited for this is to not cause fear and emotional distress. Alzheimer’s Association noted that telling the patient the truth about their diagnosis should be standard practice.

According to the 2015 Facts and Figure report, more than 5.3 million Americans — including 60,000 Oklahomans — have Alzheimer’s disease.

June is Alzheimer’s and Brain Awareness Month. It is suggested that people wear purple and encourage coworkers and neighborhoods to have an Alzheimer’s Awareness Day.