Clark Crew BBQ adds steaks and pizza to a menu that has dominated the competition barbecue circuit. 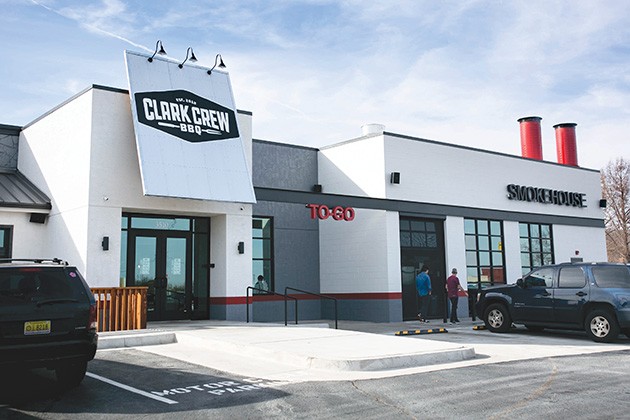 Like a location in one of Bill Hader’s character Stefon’s appearances on Saturday Night Live, Clark Crew BBQ has got it all: an outdoor dining area that seats over 500 people, competition barbecue world championship belts, grilled wagyu steaks, a fresh salad bar and a huge pizza oven.

Oklahoma barbecue has operated in the shadows of Austin and Kansas City.

Travis Clark of Yukon by way of Kansas is building off the more than 50 grand championships he has won on the competition circuit — including a 2019 grand championship at the prestigious Jack Daniels World Championship Invitational Barbecue — to make Clark Crew BBQ, 3510 Northwest Expressway, destination dining.

The competition barbecue bug bit Clark in 2012 after he attended American Royal World Series of Barbecue as a spectator. By the time Clark and family had driven home, they decided to start competing under the name Clark Crew in honor of his family that includes his wife Kimberly and children Jennifer, Madison, Brooklyn and Cooper.

“I’ve always been a competitive person, whether its competitive trap shooting shotguns, but anything I did I always wanted to be the best at it,” Clark said. “So competing in barbecue satisfies that itch. Not all of us can play in the NFL or NBA, but you can do something competitive and compete for championships.” 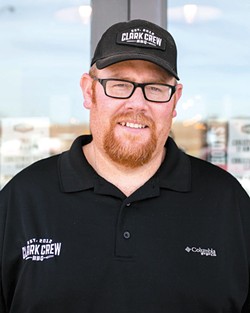 Clark and his crew showed immediate talent on the competition circuit by not only qualifying to compete in the American Royal the next year but scoring a second-place finish.

“Then I got hooked and started to take it seriously,” he said. “I can remember the first time I pulled into a contest and people came up to me and said, ‘Oh, now we’re screwed.’ It was a good feeling, like you made it.”

The crew continued collecting trophies until a serendipitous moment in 2017 when Clark attended American Royal and won the overall title. While at the hall of fame induction ceremony to support some friends, Clark was approached by Dave Anderson, founder of Famous Dave’s.

“He told me what I’d done was unbelievable and asked if I still taught barbecue classes,” Clark said. “He ended up coming to the class and had a great time. It was a memorable moment for me.”

Soon after, Famous Dave’s CEO Jeff Crivello offered Clark a job with the company. It eventually led to the establishment of BBQ Holdings, under which Famous Dave’s will continue to operate but allow for more brand expansion.

“Famous Dave’s is going through its evolution, and while it does that, we also want other paths to be operating in tandem,” Crivello told the Minneapolis Star Tribune. “Clark Crew is the first one we’ve really put a lot of time and effort and resources behind.”

Clark Crew BBQ is an ambitious addition to the Oklahoma City barbecue scene. The space formerly occupied by a Macaroni Grill was expanded from around 7,300 square feet to more than 9,000 to include a glass window-encased smokehouse that showcases four smokers, including two thousand-gallon offset smokers that are four times larger than what Clark uses to compete.

Inside, Clark Crew can seat around 200 people while the large outdoor patio adds room for more than 500 guests. There are menu options for people to accommodate a variety of tastes beyond its award-winning barbecue.

Beyond smoked chicken, turkey, brisket, sausage and pork ribs, Clark is looking to eliminate the proverbial “veto vote” among groups. He has added grilled burgers and steaks and repurposed the former Macaroni Grill pizza oven for barbecue-topped or build-your-own pizzas with traditional toppings like pepperoni or unique ones like mac and cheese. Clark Crew also has an extensive salad bar full of fresh veggies, pasta salad and smoked chicken salad. 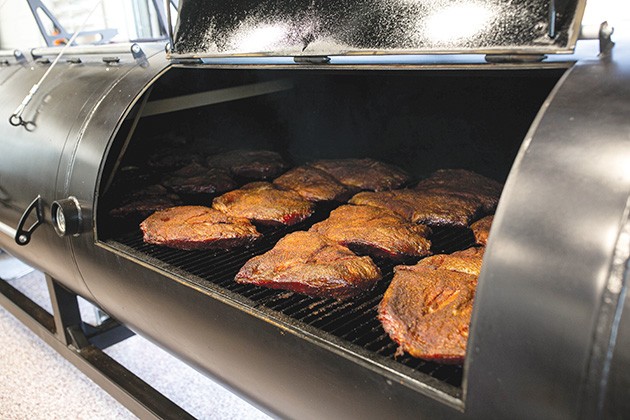 “I do a lot of steak competitions as well, so I cook a great steak, and it’s one of my favorite things to do,” Clark said. “One of my passions is grilling, and I love to grill more than cook barbecue. I cook a great steak, so we thought it would be great to have in here. If you’re going to do that, you might as well do burgers too … and I kept saying to myself one thing: How many times does the average person eat barbecue in a month? In more times than not, your answer might be one, maybe. How many times do you eat a burger? I think it is more [than once a month].”

Clark Crew primarily uses oak wood to smoke beef and pecan with poultry and pork. Pork ribs are served with the idea that “falling off the bone” is a faux pas, building off competition barbecue, which is judged on one bite.

“If you’re coming out to my restaurant, I want you to sit down and give you a rib that is savory enough that you want to eat a whole rack of ribs,” Clark said. “I want a little bit of smoke, a little bit of savory and a little more tender. That’s what I’m shooting for.”

The drink menu includes beer, wine and a craft cocktail list with classics like an Old Fashioned and Manhattan in addition to margaritas and a martini topped with olives stuffed with blue cheese.

“It was things that I thought Oklahoma City needed,” Clark said. “There are not a lot of restaurants with a great outdoor space. I think we put together a really great outdoor space. I’ve always tried to keep it in my mind: What does Oklahoma City need? It’s not just great barbecue; I’m not saying they don’t have great barbecue. I think what we’ve put together is different than most of the rest of the country.”

Clark’s reputation has preceded the opening of the restaurant. Wait times to get a table have been more than an hour in some cases.

“It’s been a little overwhelming,” he said. “Honestly, I did not think we’d be this busy. It hit day one and I don’t think we did a great job; we were very overwhelmed. We had people lining up at 8 a.m. I thought it was my employees parking out front, and I went outside and told them to park in employee parking. They said, ‘We‘re just wanting to be first in line,’ and more and more just started showing up. We had the restaurant full with a line at 10:45.”

Clark and staff are committed to working out the kinks for what they hope will be the first of many Clark Crew BBQ restaurants.

“My favorite thing every day is to see people pressed against the glass [of the smokehouse, looking in],” he said.