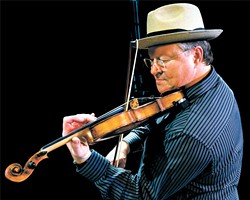 No city is more synonymous with Mardi Gras than New Orleans, but if Louisiana isn’t an option, the American Banjo Museum is using the instrument’s connection to jazz to host a celebration worthy of the French Quarter.

Museum executive director Johnny Baier said that the banjo is “inextricably” linked to the earliest days of jazz in New Orleans, the genre’s mecca.

“In the early stages of jazz, many of bands didn’t have drummers and were looking for percussive sound,” Baier said. “Also in New Orleans, the mobility of the bands, being able to march or go into halls that didn’t have pianos was important. The key here is the banjo in the Dixieland setting is the quartile instrument, similar to a piano or guitar, but it is also a percussive rhythmic instrument because of its drumlike body.”

“Shelby is a legendary fiddle player. Fiddle is not normally considered a Dixieland jazz instrument, but when you slide it into the jazz violin realm, it becomes a very cool instrument,” Baier said, noting that the evening’s music will be a mixture of New Orleans jazz, Western swing and a little bit of Hot Club de France, the music of Django Reinhardt and Stéphane Grappelli.

“In years past, we’ve done straightforward Dixieland, but because we’ll have so many people coming year after year, we though we’d put a new edge on it,” Baier said.

Tickets for the evening event are $20-$25. In addition, the Shelby Eicher Jazz Band will perform a mini concert from 3-4 p.m. (The afternoon event is included with admission to the museum.)

American Banjo Museum is no stranger to hosting live music, but Baier said the Mardi Gras event hosts some of its most fun shows.

“[The audience’s] reaction to live music is always fun to watch, but when it is tied to a fast–paced New Orleans style jazz setting, the excitement level is always greater,” Baier said. “You see people getting up to spontaneously dance, moving at the tables in a way that doesn’t happen at most events. It’s quite the amazing phenomenon.” 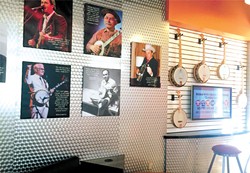 Fast-paced jazz music isn’t the only reason to tour the American Banjo Museum the weekend of Feb. 10. The museum will debut a new learning center sponsored by Kirkpatrick Family Fund that weekend.

“In addition, there is a workstation to peruse archives and connect with other banjo resources,” Baier said. “If you want to, you can sit around and pick all day.”

The new learning center pairs with the museum’s current special exhibit, a look at the career of Oklahoma’s Roy Clark, the banjo player known as “America’s super picker,” through his own words, artifacts and photos. The exhibit will be on display through March.

The museum is putting together its next special exhibit, which will feature Philadelphia’s Mummer culture, Baier said. The Mummers Parade on New Year’s Day is the oldest folk festival in the country, and in addition to flamboyant costumes, the Mummers have a deep connection to string music, and the banjo in particular. Baier said the exhibit will be in place by the summer.