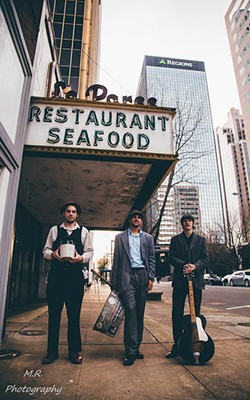 Many attempt to define the Americana music genre. For American Banjo Museum, it’s simple: The banjo should be present.

“We look at the banjo itself, and it’s the only true American instrument, the only instrument that was conceived and defined in America,” said Dustin Pyeatt, the museum’s outreach and development manager. “You look at Americana, you look at folk, you look at roots music, you look at bluegrass and country and even alternative rock of today — you can see the banjo running through all of that. We try to assemble a group of bands that are diverse, but they all have a banjo in them.”

There are many who try to limit the banjo within specific genres such as bluegrass or country. However, the instrument refuses to be kept within those barriers and finds its way into songs as diverse as Led Zeppelin’s “Gallows Pole” or the experimental tones of Bela Fleck. Simply put, the banjo will not be stifled.

“It seems that every genre of music in every generation rediscovers the banjo as an instrument,” said Pyeatt. “You can go all the way back to the Civil War. You have everything from classical music to bluegrass to jazz to country to even alternative rock today. You have Mumford & Sons, Judah & the Lion and bands like that, bringing the banjo with them into modern music.”

Last year, when American Banjo Museum hosted its inaugural Americana Fest, Pyeatt said they only expected 50 people. Instead, over 250 people showed up. With high hopes for this year, the second annual Americana Fest is 11 a.m.-5 p.m. June 24 at the museum, 9 E. Sheridan Ave.

Oklahoma Gazette caught up with Steel City Jug Slammers by phone while they were traveling through Cincinnati, Ohio. The three-piece ensemble includes Ramblin’ Ricky Tate, Washtub Jay and Maxwell Honeycup. A fourth member, Tate’s brother Byron Barry Tate, is currently taking a break from traveling due to the birth of his new child.

While the band members grew up together playing punk and rock, Tate said a particular set of circumstances steered him from punk-style drums toward the 1920s-’30s washtub sound.

“[I was] rolling around the country with people who were playing acoustic music,” he said. “I had to find a way to make music with them so I could make money to eat. I started brushing a peanut can with a brush drumstick, kind of like a jazz drum. That led me into the washboard.”

Playing the washboard then evolved into learning other instruments such as the washtub bass, jug, mandolin and guitar. By 2012, Tate and his childhood friends formed Steel City Jug Slammers and went full-time in 2015. The band began getting nationwide media exposure when one of its performances aired on a Christmas episode of Animal Planet’s Pit Bulls & Parolees. Eventually, its music made its way to the NPR airwaves through A Prairie Home Companion before Garrison Keillor retired.

The musicians’ stage personas would fit right in with the jazz bands or Appalachian bands of the early 20th century, right down to their flat caps (which the band jokingly calls its “Beatles hair”) and wool trousers. While the band’s music is rooted in this style, Fats Domino tunes and conversations about video games are also a part of their set. Tate calls it “new-timey.” Its original material’s subject matter might be modern at times, but the 1920s-’30s framework helps shape the music.

“When I’m writing, it’s based on things that I’ve done traveling around,” said Tate, “the things I’ve seen in my travels, incorporated with the aspect of heartbreak in the blues and the whole subject matter of things I like about old country tunes and the old blues music. I take those elements and incorporate some of my own stories and experiences.”

The three musicians rotate instruments that include washtub bass, vintage jugs, mandolin, guitar and, of course, banjo. While Tate said the band wants people to see them play, he is more interested in them experiencing American Banjo Museum itself.

“[Oklahoma City is] lucky to have a place like that collecting and preserving our musical history,” he said.