Oklahoma has a colorful musical heritage, one with deep roots in the traditions of Americana. The banjo, long considered by many to be the quintessential American instrument, has its own museum right here in Oklahoma City.

“The banjo has been evolving with American social and popular culture since it was introduced to American soil by African slaves in the mid-1600s,” said Johnny Baier, museum executive director. “It is inextricably tied to the development of American popular music since the 1800s, and to many, the banjo is ‘the sound’ of America. … The musical diversity of the banjo will be on full display with performances by four of the world’s most renowned and respected banjo players and entertainers.” 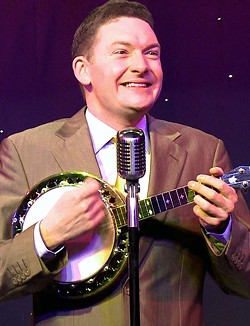 “Although the American Banjo Museum has done a number of festival and concert events in the past, Banjo Fest is the new permanent brand we have assigned to what we plan to be an annual event,” Baier said.

The museum originated in a small, second-floor space in Guthrie in 1998. From there, it grew to the current 21,000-square-foot, state-of-the-art facility in Bricktown. Baier says the venue typically sees in excess of 10,000 visitors annually from around the world.

“Museum guests are sometimes banjo players, but more often than not, our guests are non-players who are interested in the banjo and how it relates to American popular music and culture,” he said. “An icon of banjo music and pop culture, (actor and comedian) Steve Martin has lent his name, story and some rare instruments and artifacts to our current special exhibit.”

That popular exhibit, The Banjo World of Steve Martin, runs through February at the downtown Oklahoma City museum.

Banjo Fest is part of the museum’s Hall of Fame weekend, which runs Sept. 8-10. A welcome reception is 6 p.m. Sept. 8 at the museum and includes a barbecue dinner and a ceremony honoring this year’s Award of Excellence recipient, Oklahoma’s own five-string banjo picking legend John Hickman. The Hall of Fame induction dinner follows 6 p.m. Sept. 9 at Vast atop Devon Energy Center, Baier said.

Informal Hall of Fame induction performances begin at noon Sept. 10 at the museum.

“Physically, the banjo has been in a constant state of evolution, changing its construction, tuning and playing style to suit the popular music of the day,” Baier said. “Although most recently associated with bluegrass, folk and country music, early banjos could be heard playing classical music in concert halls of the late 1800s, providing the rhythmic pulse of dance bands during the Jazz Age of the 1920s or accompanying the singing and dancing of comic performers in the minstrel shows of the mid-1800s.”