It can be tempting in the modern saturated market for some musicians and music fans to focus only on the present and not spend much time delving into the sounds that came before them.

Nashville-based vocalist and singer-songwriter Amy Black is not the type to get afraid of a little music history. The naturally curious soul and roots performer spent the last several years diving into the music of Memphis, Tennessee, for her upcoming album, a sonic tribute to a place sometimes called Blues City.

Black released Memphis, her newest studio album, June 2 and began her tour in support of the album June 5 in Cleveland, Ohio. As part of that tour, Black performs 8 p.m. June 23 at The Blue Door, 2805 N. McKinley Ave.

During a recent phone interview with Oklahoma Gazette, Black was preparing to visit Cleveland’s Rock & Roll Hall of Fame. The vocalist has visited the attraction in the past, but several of her band members were first-timers. For a fan of music history, she said there is no better place.

Black, who was raised in Massachusetts with roots in Alabama, was not always a Southern-style soul and blues crooner. Within the last few years, the vocalist has modeled her sound more closely to classic-sounding R&B and soul performers like The Staple Singers and Ann Peebles.

A casual interest in the music snowballed into an artistic obsession. Black feels at home in the Southern soul style.

“It’s kind of nice to have a path like that to be on and to dig into all this amazing music,” she said. “A lot of it is forgotten.” 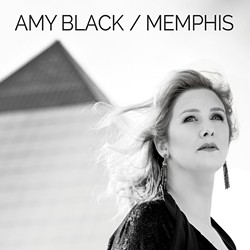 Black’s last album was 2015’s The Muscle Shoals Sessions, named for the historic Sheffield, Alabama, recording studio in which it was made. She relocated from Massachusetts to Nashville in the same year. The Sessions project was the first time Black really explored her Southern roots.

The blues and soul sounds worked well for her. Memphis, recorded in analog in the eponymous city’s Electraphonic Recording studio and mixed to tape at Ardent Studios, represents a natural branching off from the sonic direction Black took on Sessions.

“If I hadn’t been living in Nashville, I probably wouldn’t have recorded this album in Memphis,” she said. “It just made it so easy for me to get there and to meet people, check out studios and connect with that whole scene there.”

While The Muscle Shoals Sessions featured more covers, seven of 10 songs on Memphis are original works. Still, Black fills out the city vibe on the album with covers from Bobby “Blue” Bland (“Further on Up the Road”), Otis Clay (“If I Could Reach Out (And Help Somebody)”) and Ruby Johnson (her version of “Need Your Love So Bad”).

In her original work, Black was focused on broaching a number of influences she found within Memphis music without limiting herself to a particular lyrical theme.

“I didn’t approach it as a singer-songwriter writing all this introspective stuff,” she said. “It’s a mix. There’s some depth there ... but I also tried to keep it on the lighter side.”

Black feels like she has found her groove in Southern soul. The music allowed her to express herself in many new ways.

“It’s gutsy,” she said. “It’s kind of gritty. It’s super soulful — it grooves. It just grabs you right in your gut.”

Though she had seen the city on a couple of other limited visits, Black had not spent much time in Memphis itself before starting work on the album. She made a point to make up for lost time. She temporarily relocated to the city and, in addition to her musical research, tried to get a grasp on what it was all about.

“It was like full immersion,” Black said. “I was out hearing music every night, and then I went back multiple times after that for the album.”

What she found was honesty, a gritty but charming community that seemed to mirror the music it has produced. The straightforward attitude reminded Black of her former New England home.

By taking the time to submerge herself in the city’s music history and culture, she said Memphis gained a sense of depth that exceeds her other works.

“I get to come in and, in my own small way, become a part of something that was really special and bring that music to other people,” she said.

Black’s most recent — and only previous — trip to Oklahoma City was on her tour promoting The Muscle Shoals Sessions, in which she also played The Blue Door. Some of her musician friends had played the venue before, but she otherwise went into Oklahoma without any preconceived notions of what she might find here.

Her trip made a lasting impression.

“We just didn’t know what to expect, and it turned out to be a pretty packed house,” she said. “Just the energy level — the audience just gave so much. When their energy is high, it sends mine through the roof.”

Black said she is vaguely aware of the city’s own blues history but is eager to learn more about it. And when Black says she is interested in learning music history, it is a safe bet that she is offering more than lip service.

“It’s like going to music history class, and I love both history and music,” she said. “Digging into Oklahoma’s blues history is something I’m totally interested in doing.”