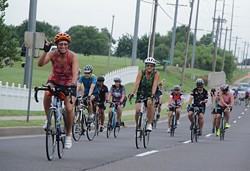 Orchestrated once again by the Bicycle League of Norman, the Norman Conquest began with a group of less than 20 riders getting together at O’Connell’s Irish Pub & Grille in Norman for a group ride.

Conquest chairman Jerry Puckett said the fundraising aspect came into play about nine years ago at the recommendation of a league rider who also worked at the J.D. McCarty Center. Since the two organizations combined forces, attendance at the annual ride has skyrocketed.

Camp ClapHans is a residential summer camp located on the south end of the center’s 80-acre campus in Norman for youths age 8 to 18 with special needs. Activities feature archery, canoeing, horseback riding, swimming, fishing, arts and crafts and more.

Puckett, who has chaired Norman Conquest the past two years, found himself in the position in the wake of a personal tragedy.

“On Aug. 22, 2015, I was riding a very common ride from Purcell to Wynnewood and back with my best friend when we were approximately 2.5 miles from Purcell on the ride back when he was struck and killed riding next to me,” Puckett said. “This was a very difficult thing to deal with, but as part of his memory, I approached the Bicycle League of Norman about having a ride in his memory. At the time, they were actually looking for someone to take over the reins of the Norman Conquest.” 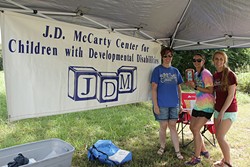 Puckett described the planning and fundraising experience as a therapeutic channel to honor his late friend and keep his mind occupied through the responsibilities and duties attached to the chair position.

He said planning typically begins as early as January to designate duties among Bicycle League of Norman volunteers.

“Then we go into fundraising and try our best to get this completed by middle of March so that we can get our promotional items distributed,” he said.

The 22nd Norman Conquest offers a variety of tours for riders of all kinds and skill levels 7 a.m.-1 p.m. Saturday at J.D. McCarty Center, 2002 E. Robinson St., in Norman.

Puckett highlighted the Town Tour, which incorporates a family-friendly ride totaling 10 miles. The lengthiest route, the 64-mile Fallen Cyclist Memorial Loop, is dedicated to the memory of all fallen and injured cyclists.

With registration, riders get a T-shirt and a meal after Saturday’s ride as well as a spaghetti dinner at O’Connell’s Irish Pub & Grille, 769 Asp Ave., on Friday. Registration is free-$180.