An array of working parts weighs down Suicide Squad's narrative

There must be a director’s cut of Suicide Squad that makes a lot more sense than the one showing in theaters.

Based on a 1980s comic book of the same name created by John Ostrander, Suicide Squad is the simple story of a group of imprisoned supervillains coerced into serving as an elite fighting force for the government.

The comic book has time going for it. The movie, however, does not. Over a series of months and years, writers and artists of the comic built suspense, let characters grow and created a cohesive world for the squad.

Suicide Squad builds on the concepts of Man of Steel and Batman v Superman: Dawn of Justice, but it doesn’t feel like it belongs in the same world, even though all three films are extremely pessimistic.

The problem is if there were ropes courses or trust falls, the movie skated right past them. The villains barely seem to know the others exist, much less have a personal bond.

Deadshot (Will Smith, Men in Black, Hitch) is an assassin who never misses, but he has a weak spot for his daughter. Harley Quinn (Margot Robbie, The Wolf of Wall Street, The Legend of Tarzan) is a psychiatrist turned psychopath and the Joker’s girlfriend. Both are captured by Batman (Ben Affleck, Good Will Hunting, Argo) before Waller gets to them. 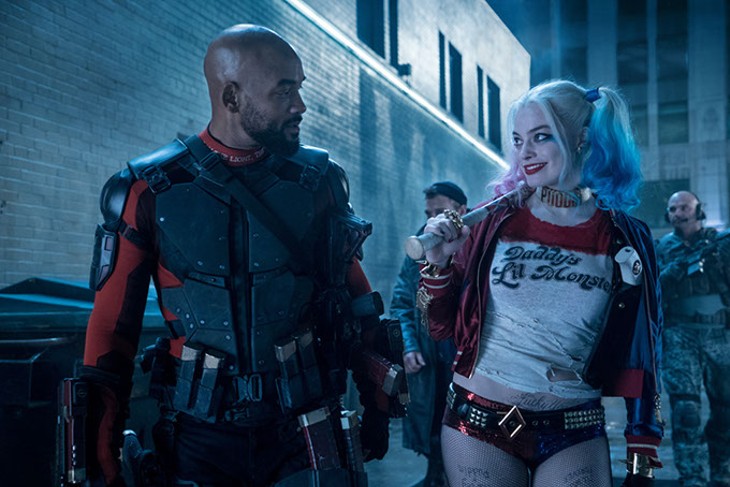 The rest of the team is a little less defined. Killer Croc (Adewale Akinnuoye-Agbaje, The Bourne Identity and TV series Oz) looks like a monster, so he was treated like a monster, so he became a monster. Diablo (an extremely tatted-up Jay Hernandez, Crazy/Beautiful, Hostel) is a pyrokinetic gangbanger with a tragic family story. Captain Boomerang (Jai Courtney, A Good Day to Die Hard, Divergent) is an Australian bank robber who ran up against the Flash.

They’re thrown together with elite soldier Rick Flag (Joel Kinnaman, Robocop and TV series The Killing) and an interdimensional witch named Enchantress (Cara Delevingne, Paper Towns, Pan) who he shouldn’t have fallen in love with.

This sounds like too many characters to keep up with because it is. In an ensemble this big, with characters that didn’t appear in previous films, it’s hard to fit everyone in and make them matter.

Suicide Squad’s real storytelling obstacle is that there’s not enough time to introduce everyone, make them seem cool and give them believable story arcs. The obvious comparison is Marvel’s superior Guardians of the Galaxy, which benefited from a central character and a less-confusing mission.

Longtime fans of the comics will be frustrated with the time wasted on slow-motion shots instead of character development. Filmmakers seek to claim the hard-fought camaraderie of villains who have come to trust each other but wedge it in halfway through a mission none of them think they can complete.

One of Suicide Squad’s biggest frustrations is watching scenes chosen for the film and wondering what was left out. Would the relationship between Flag and Enchantress be more believable? Would the shift from coerced villains to “family” make more sense? Instead, viewers are left with a visually stunning movie that lurches from set piece to set piece, giving only Smith, Robbie and Jared Leto’s Joker enough screen time to make impressions.

Much like the dreary Batman v Superman, it seems a lock that Suicide Squad will recoup its cost, plus some.

Hopefully, that means a second film for the morally challenged team and, with it, a little more time to care about who the characters are before wondering which ones will survive.