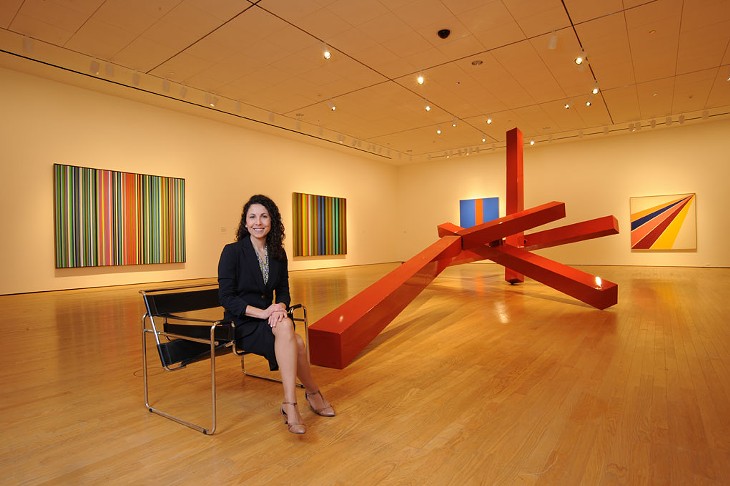 For residents in metropolitan areas like Oklahoma City, access to art and historically significant objects is often taken for granted. Civic pride, education and boasting rights are regularly carried by local museums and art galleries, but questions about how these things found their homes are usually few.

Curators are architects of the museum experience. They formulate the concepts behind exhibitions, determine their components and direct the flow of the stories being told. Without curators, museums would be glorified storage lockers.

Oklahoma City Museum of Art (OKCMOA) recently announced Francesca Giani as its curator of modern and contemporary art. Giani’s prior job was guest curator at Fred Jones Jr. Museum of Art at the University of Oklahoma in Norman.

She was born and raised in the home of the Renaissance.

“When you grow up in Italy, you grow up surrounded by art, whether you want to or not,” she said of her upbringing in southern Italy, near Naples.

Her family, including her mother, who studied design, also appreciated art.

“My mother initially was an architect, then turned to teaching. She’s an art historian in a sense,” she said. “My parents always took me to museums, visiting cities, historical cities, which [in Italy] every city is a historical city.”

Giani earned her bachelor’s degree in Renaissance art from the University of Naples. Opportunities afforded to her by American museums and galleries that did not exist in her home country spurred her move stateside.

“Access to museums [in Italy] is not as direct as it is here, meaning there weren’t opportunities for internships and volunteer opportunities,” she said. “[They] were mostly government-run, and to work in a museum, you have to pass a nationally competitive exam. I was fascinated by the world of American museums for being so different.”

In 2011, she received her master’s degree in art history from San Diego State University. From there, she began an internship at OKCMOA.

The responsibilities of a curator are often assumed by and rarely explained to those outside the museum world. Giani said the duties can be broad but focus on a story and how it is told.

“As a curator, you start developing an idea for an exhibit … you can approach it in many ways,” she said.

Historical exhibits can be approached chronologically, for example, and a permanent collection can be themed and focus on something specific, like portraiture or landscapes.

She said an example is Our City, Our Collection: Building the Museum’s Lasting Legacy, currently on display at OKCMOA. It tells the story of Oklahoma City Museum of Art through its gifts, bequests and acquisitions. Pieces by Georgia O’Keeffe, Marcel Duchamp and Gustave Courbet are arranged to highlight the people and organizations from which the museum received the works.

Rather than focusing on the artist or subject of the piece, a theme gives a fresh look at works the museum has long held dear. For instance, in 1942, 23 showcased works were donated from the federal Works Progress Administration.

Giani said the style of art she is most drawn to is that of the minimalist light and space movement. The sensorial art form sprouted in 1960s California and uses light and geometric shapes to affect perception and environment. It is the focus of her University of Oklahoma doctoral thesis. She also is working on a sensational art exhibition for the museum.

“Some of it is optical, some of it kinetic,” she explained. “It might also include some light and space artists who work with perception and sensorial deprivation. It would be an exhibit that would allow us to showcase our very impressive collection of optical and kinetic work.”

She also wants to change the perception that modern and contemporary art is intimidating.

Learn more about Oklahoma City Museum of Art at okcmoa.com.