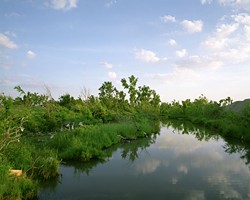 The University of Oklahoma’s Fred Jones Jr. Museum of Art confronts the environmental and sociopolitical consequences of commerce and economic gain with its summer exhibition Picher, Oklahoma: Catastrophe, Memory, and Trauma. Featuring photographer and OU assistant professor Todd Stewart’s collected photographs and objects from the vacant northeastern Oklahoma town, this nine-year project commemorates the past as much as it hypothesizes the future.

Museum director and curator of the exhibition Mark White spoke to Oklahoma Gazette about the significance of preserving the memories of towns that have fallen to manmade and natural disasters.

“Landscapes are bearers of memories,” White said. “Todd’s images of Picher encapsulate the complicated process of trying to reserve the memories of a town that is no longer habitable.”

In a project that’s as anthropological as much as it is artful, Stewart’s documentation of Picher spans from 2008 to 2017, featuring images and objects collected from the small mining town. Simultaneously quaint and eerie, White said Stewart’s photos capture the town’s complex identity.

“From 1917 onward, Picher was first and foremost an industrial town, and the effects of that fact are still evident today,” he said. “There are sink holes, massive hills of waste and toxic materials from this town’s mines and different factories that contributed to both World Wars.”

Located on Quapaw tribal territory, Picher was part of the Tri-State Lead and Zinc District that supplied hundreds of jobs to working-class families. However, in 1967, its mines closed, resulting in a destructed, poisoned landscape and economy.

“In the 1980s, Picher and its surrounding towns were declared the most toxic areas in America,” White said. “During that point until the 2008 tornado, there were many failed attempts to remediate the town’s water supply and general quality of life, but the damage was irreparable.”

2014 marked the town’s formal termination — all remaining residents were evacuated from the toxic site, leaving behind generations of memories and connections to a community.

Stewart’s nine-year documentation of Picher marks its final days as a functioning community but also functions as an archive of memories through observation and collection.

“Todd’s work was originally meant to be displayed in a book,” White said. “Seeing his work in its original form gave me the idea to display these images in our museum. I first encountered these images before the 2008 tornado, and I had no idea what a timely project it would become.”

Like many industrial towns in America, Picher’s former residents experience high levels of different health issues caused by a toxic environment. OU’s past philanthropic efforts in the town significantly outlined Stewart’s approach to the art.

“A team led by Dr. Bob Nairn working on water purification efforts in Picher sparked Todd’s interest in the town,” White said. “Todd got more involved in 2008, asking through his work what kind of record of the town remains after cataclysmic events occur.”

Photographs of the town’s uninhabitable landscape include hills of past mining materials, sinkholes and decaying buildings, but the exhibition isn’t intended to be completely hopeless. Stewart’s work in the toxic Superfund site might mark the end of a town, but it breathes life into the town’s history through its residents.

“Not only do the images in Todd’s work reflect the fact that this space used to be inhabited, but the objects left behind speak volumes on their own,” White said. “We’ve included things like postcards, crafts and other personal memorabilia that Todd collected during his project.”

Such a collection of seemingly inconsequential items take on new significance when paired with the people and history of their physical origin. Objects on display in the exhibition hold sentimental and scientific value. 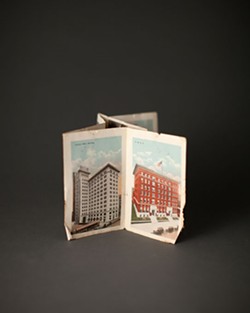 “When the museum decided to create an exhibition from Todd’s work, we also wanted to include the specific mining minerals from Picher that speak to the area’s geological history,” White said. “We directly worked with Todd to collect that material. So while this is an art exhibition, it’s really about documenting the physical consequences of environmental disasters like Picher, and that begins with its geological origins.”

Talking about the town’s massive deposits of lead and zinc brings a vital awareness to these issues, but actually seeing these materials in person raises the immediacy of the environmental damage in towns like Picher.

“These minerals covered not only northeastern Oklahoma, but also parts of Kansas and Missouri,” White said. “This Tri-State deposit was enormously important in developing the communities in this region, but unfortunately, the story ends tragically. We’re exploring what remains after towns like Picher are abandoned.” 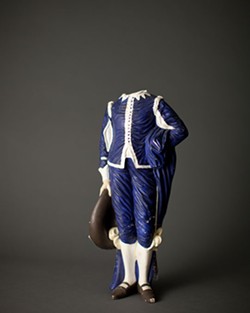 In covering such a complex narrative with many parts, public education is crucial to connect one issue to the next. White said the museum’s educational programming for the exhibition seeks to provide a critical approach to current environmental subjects.

“Looking at these objects from Picher, we want people to consider what these physical remnants say about their culture and history,” he said. “We’re asking families in particular to think about the objects they hold dear and what they say about us as individuals and communities.”

The Fred Jones Jr. Museum staff has made it their mission to extend education to all areas of their own community. Along with hands-on art activities and discussions, the museum will hold a writing workshop for OU students led by graduate student Matt Jacobson Sept. 1 and a closing reception Sept. 7.

“Our closing reception in September will focus on our faculty and student population when they arrive on campus for the fall semester,” White said. “We will feature a lecture by Alison Fields, who wrote the text for Todd’s original book about Picher.”

No research project is absolutely unbiased, and Stewart’s presents the evidence of a town with a tumultuous history without making finite conclusions. Rather than providing answers to the complicated issues presented in Picher, White said the exhibition promotes new possibilities for viewing the health of communities.

“We’re not here to stand on a soapbox or preach the importance of going green,” he said. “However, there is certainly a lesson to learn through these images of empty buildings and tarnished landscapes. It’s about thoughtfully considering the future of our landscape.”

Print headline: Still life, An art exhibition and book give glimpses into the lives that once filled an Oklahoma town.