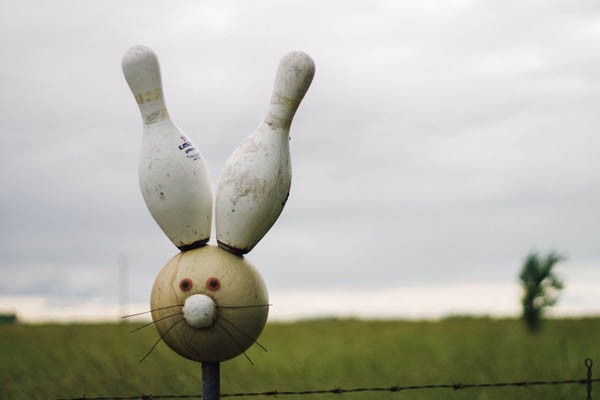 “Katie and I got the idea for this exhibit about two years ago,” he said. “We travel quite a bit, and every so often, we would run into things we’d never heard of in Oklahoma. We started looking for them. Some are natural, some are historic and others are artistic.”

The couple eventually tracked down and photographed more than 75 destinations and use 43 in their Off the Beaten Path exhibition, on display now at smART Space inside Science Museum Oklahoma, 2020 Remington Place.

The pair researched as many as they could, and one thing led to another.

“We … found that when we’d go someplace, someone would tell us about something else,” he said. “Some of them were really hard to find, even once we’d heard about them from several people, because they had no physical address.”

In order to maximize their travel time, the Hendersons mapped out routes that took them to 10 or more sites in a single trip, often camping in between, weather permitting.

“We had to go back to quite a few, because we’d plan our trip one week and the weather was supposed to be clear, but then by the time we were on the road, conditions had changed,” he said.

One of his favorite sites is in Nowata, where resident Chris Barbee transformed thousands of bowling balls into a yard-art homage to his late wife.

“Chris Barbee’s wife loved to garden, and he would place bowling balls in her flower beds, like people use ornamental gazing balls,” Henderson explained. “She died in 1997, and he decided he would honor her memory by continuing to decorate.”

Bowling ball installations include an abacus, an American flag, a rosary and a house framed with the weighty spheres. Barbee also created a rabbit out of bowling balls and pins. He’s so well-known for his art that people from more than 25 states visit just to bring him more bowling balls.

Another, lesser-known public art creation resides in a ditch near Talala. Legend has it that a cement mixer fell off of a truck 35 years ago and landed in a ditch, where it stayed, Henderson said. For fun, people began painting it, and in 2011, for their fifth wedding anniversary, Barry and Heather Thompson decorated it to look like a space capsule, and it has not been painted over since.

Katie Henderson has her favorites, too.

“In Kenton, which is in the very tip of the panhandle, there is an archeological dig with dinosaur bones,” she said. “There is also a place outside of town where scientists gather to look at and photograph the stars. They stay for a week and bring these huge telescopes, and all night, you can hear them buzzing as they rotate to take pictures of the stars.”

She said that creating their Off the Beaten Path project was a wonderful and eye-opening experience.

“Oklahoma is a great place; it’s really diverse,” she said. “There are so many different landscapes, from the rolling hills in the southeast to the flat, rocky terrain of the panhandle. And every place we went, the people were wonderful.”

Off the Beaten Path