An Oklahoma man might become the U.S.'s first male saint 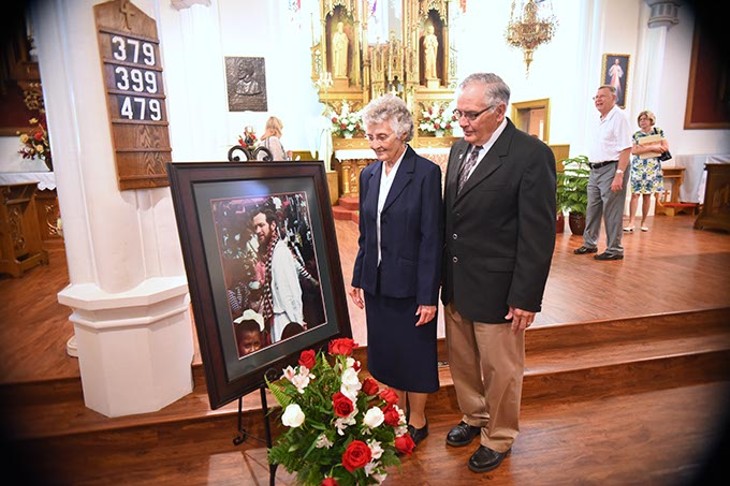 A former farm boy from Okarche had no intention of becoming a martyr for the Christian faith. Yet, the Roman Catholic Church is on the brink of declaring him one.

In June, a special commission at the seat of the Catholic Church in Rome voted to recognize Father Stanley Rother as a Christian martyr. That commission did the heavy lifting of carefully examining the case and then passing on a recommendation.

If a larger group of bishops and cardinals affirms that vote and Pope Francis agrees, he could declare Rother a martyr and blessed, or beatified.

Once a martyr, he will be eligible for sainthood. Events that led to that decision started 34 years ago in Santiago Atitlán, Guatemala.

Rother was killed in the living quarters of the mission to which he was assigned on July 28, 1981.

That night, he was simply intent upon staying alive for another day in order to remain a faithful shepherd of his parishioners there. In the past, he had narrowly slipped away from the death squads. But this time, they were successful.

A squad of gunmen broke into the rectory to take him away, as had been done earlier to so many others. But he was not willing to go quietly. He knew what was next.

Hundreds of his parishioners had been kidnapped in the night only to be tortured and killed someplace else. Either their mutilated bodies would be left on the road as a lesson to others or they would never be seen in any form again.

So Rother fought back. If they were going to kill him, it would have to be there. And that’s what they did.

“A shepherd does not run,” was what he wrote to concerned family members the last time he chose to return to the mission.

That was his vocation, his calling. But clearly, the government considered him something other than a shepherd. 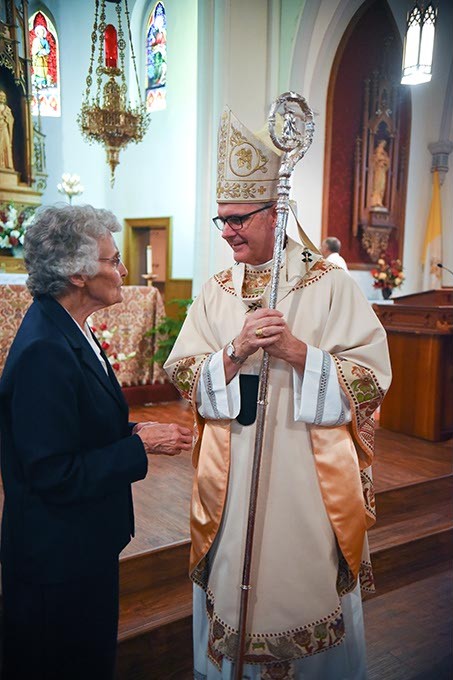 Anyone who helped the poor empower themselves could become a target of the brutal governments in Central America in the late 1970s and early 1980s.

The missionary priest to a humble people had found himself in the midst of a larger Central American struggle between restless, poor natives and the Spanish-speaking oligarchical governments that received their training and monetary support from the United States.

The U.S. considered those movements to be playing into the hands of Cuba’s communist influence, which American presidents had sworn to contain at all costs since the surprising success of Fidel Castro’s revolution there in 1959.

And Rother was one of the costs.

The costs were also high for the Santiago Atitlán community that the mission served.

Today, at the shrine in the entry to the church there, Rother’s name is listed along with over 300 parishioners who were kidnapped by government operatives and never seen alive again.

Priests were not exempt from being included on the lists.

Earlier, Rother had been warned by reliable sources that his name had been added to a list of those being targeted by the shadowy government squads.

The archbishop called him back home to Oklahoma twice for his own safety, and each time, he had chosen to go back and be the shepherd of the people who he loved and who loved him.

To those intent on keeping the oligarchies in power, a shepherd could look like a revolutionary simply for showing people how to grow their own food and read, which were some of the things that Rother had done for the people of the mission.

The results were gruesome.

The regular practice was to take people who were on kill lists out of their homes in the middle of the night, torture and kill them at a remote location and then leave their bodies on a road for others to see the next morning.

In some cases, before family members could retrieve the body, government operatives would take and bury it in a clandestine, unmarked mass grave in some other part of the country.

In that culture, it was terror added to terror to deprive family members of the ability to visit and pray at the graves of their loved ones. It was a deliberate way of disrupting the culture and faith of the poor.

Out of that practice, a new verb was added to the lexicon of the day. It became a common word in repressive countries throughout Latin America: “disappeared.”

One of the ways death squads effectively induce terror is when their anonymity matches their ruthlessness. But sooner or later, the people begin to realize who it is among them who are doing the killing because the government also needs it to be known that they are the ones who wield the power.

Father Lawrence Stasyszen, abbot of St. Gregory’s Abbey in Shawnee, was on the archdiocesan commission that went through the two-year investigation that was necessary before Rome could be petitioned. The group compiled whole boxes of transcribed testimony from the people who were active or even touched by the mission’s work at the time.

Stasyszen was blunt about what they found about the situation there at the time.

“In reality, the people of Santiago Atitlán were being terrorized, tortured and killed [by] soldiers, paramilitary groups and death squads that were the puppets or doing the dirty work of the Guatemalan government,” he said.

The dire situation of an increasing loss of priests and nuns from violence in Central America wasn’t lost back then on Pope John Paul II, who seemed convinced of its source.

Dated Dec. 2, 1985, the pope issued a letter to the government of Guatemala protesting the killing of lay church workers and nine priests, which included Rother.

He praised church workers who had “spilled their blood” to teach the gospel.

After Rother’s death, the Oklahoma City Archdiocese decided not to put Oklahoma priests back into the mission for three years in order to let the political situation in that part of Guatemala cool off.

Father Thomas McSherry, now the pastor of St. Patrick Catholic Church in Oklahoma City, was the next priest from Oklahoma assigned to the mission. He originally committed to stay at the mission for five years, but he stayed for 17, building on Rother’s work before coming back to Oklahoma.

McSherry said that the first time he visited was the second anniversary of Rother’s death.

“There was a deep faith that I encountered,” he said about the Tz’utujil people of the mission. “They had a vigil ... and I was struck with how much he meant to them.”

The official governmental language of Guatemala is Spanish, and the language of Rother and McSherry’s parishioners was the native Mayan dialect also called Tz’utujil.

In reality, to most of the poor of Guatemala, Spanish is the historic language of the oppressor.

In order to truly understand his parishioners, Rother started the long process of learning the Mayan dialect, and it was no small thing to do.

“There’s no school that you can go to. He just had to go out there and spend time with the people and learn the language. It’s really amazing how he did that.”

Once he started to master the language, he persuaded some of his parishioners to assist him in translating the New Testament into Tz’utujil, which he did before his death.

McSherry said that his part in the project was finally getting it published.

When asked about how much he thought Rother got caught up in the political struggles of that time, McSherry was certain about Rother’s focus of ministry at the mission.

“What I understand about Stan was that his preaching was the gospel,” McSherry said. “It wasn’t about enticing or inviting political action for or against anything.”

But the brutal politics of the time did create daily situations in which a loving missionary priest would become involved with victims of the violence.

“Stan did care about the poor and did go looking for bodies if someone disappeared,” McSherry said. “He did take care of the widows and orphans of the people who were killed.”

He said that while those acts were done out of mercy and the gospel, in the eyes of the government, those simple, loving acts connected Rother to those who were targeted for political reasons.

Political conservatives in the U.S. and Latin America have tended to downplay the deaths of church workers, priests and nuns during those years.

They claim that religious leaders got too close to the politics of the day and lost their lives because of it rather than being killed for their faith.

But Rother’s situation has been convincingly clear from the outset as a case of a government deciding to silence him because the Christian faith that he was promoting was starting to empower the poor too much.

The Catholic church has a particular Latin term for that kind of hatred. It’s called in odium fidei.

In comments in a Facebook post about the decision, one reader asked about the deeper meaning of the term.

“When the Catholic Church considers the possibility of declaring someone a ‘martyr,’ it is not enough to show the intention of the one who died as doing so out of faithful witness to the faith. It must also be shown that those who killed the person were motivated by their ‘hatred of the faith’ — in their apparent hatred of the gospel of Jesus Christ — and not for some other reason or motivation — such as politics, personal animosity or financial gain, etc … It has been shown in a convincing way that those who killed him did so out of their hatred for the Christian faith, their hatred of the Catholic Church and their hatred for Fr. Stan’s faithful and courageous living out of that faith.”

This was not a case of someone trying to engineer his or her own martyrdom by repeated exposure to danger. That would require narcissism for which there is no evidence.

In fact, Rother was still attempting to thwart the death squads catching up to him even in the final two weeks before they succeeded in their efforts to permanently silence him.

In the end, it did not help.

Rother’s home parish where he first learned and grew in his Christian faith was Holy Trinity Catholic Church in Okarche.

That parish held a vigil on the anniversary of his death on July 28th and then hosted Archbishop Paul Coakley for a full memorial mass on Aug. 1.

Sister Marita Rother, Rother’s sister who grew up with him in Okarche, said that the last time he came home and informed family and others that he would go back, they were fully aware of the extreme dangers of such an action.

She said the one time she asked him about it, he said, “I just know that it’s something that I have to do.”

But she affirmed his decision against her natural desire to protect a family member.

“It was kind of that feeling of, Who am I to question God’s work in him?” she said.

During the mass, Archbishop Coakley pointed out that Rother had been an “ordinary guy” who became someone through which God could do great things.

“God chooses ordinary men and women and, with his grace and transforming power of his spirit, lifts us up and enables us to do things that are far beyond our mere human capacity to accomplish,” Coakley said.

Print headline: Of faith, One of Oklahoma’s native sons could become the first male saint born in the U.S.